‘Innovation’ is the worst word of the year, with ‘agile’ a close second

The private sector is not the be all and end all of Australian technological advancement.

Once a year, many of the world’s major dictionaries award a single word special status. Terms like “podcast”, “mansplain” or, I don’t know, “topiary”, are selected by the Oxford or the Macquarie for the ample meaning they have quickly acquired. Perhaps it’s time for the lexicographers to also honour those words that have been drained of meaning through misleading overuse. Here’s a nomination for 2016: “innovation”.

As soon as Malcolm Turnbull assumed leadership of his party, he began speaking the sunny language of Silicon Valley. Terms like innovation, “disruption” and “agility” all come to us from that tiny part of the world that continues to deliver firsts in both tech and breathtaking tax evasion. Companies like Apple, Facebook and Google will be remembered not just for the way they brought the world to our pockets, but how they put their invisible hands inside our pockets and lifted taxes for their extraordinary gain.

Turnbull’s view that we can “hack” the future best with recourse to private enterprise is enormously popular. There are many who ardently believe that private companies deliver efficient, sexy outcomes while the public sector is just an iron cage packed with fat cats. This, of course, is not a new idea — and John Locke, Ludwig von Mises and Milton Friedman all argued successfully against public goods spending well before they could be described by fans of Silicon Valley as “influencers”.

But in a world that now suffers great lapses in memory, we allow the Turnbull program of “innovation” to appear not, as it is, taken directly from the Austrian School economists of the early 20th century, but something hot and new. As Laura Tingle made meticulously clear in her Quarterly Essay, Political Amnesia, we tend now to easily forget the things that came before. We permit ourselves to think the cruellest, oldest and least successful forms of economic liberalism are “neo” and, without Tingle, we might forget that public servants sometimes do stuff more efficiently than private companies. “[W]e have to rethink the idea that, in all things, the private sector does a better job,” she writes.

There are few who would argue that the private sector has, by any measure, achieved a great level of success on Manus Island and Nauru. At great cost and with the great opacity that complex private sector arrangements necessarily, if not intentionally, produce, these moments will be remembered — if they are remembered — as a tragic failure. A profitable, often corrupt and inefficient “Aboriginal Industry” — decried by Noel Pearson and others — arose when John Howard decided the Aboriginal and Torres Strait Islander Commission was corrupt and inefficient. It is tricky, given the shifting nature of the jobs market, to compare the efficiency of the outsourced Job Services Australia to the former state-run Commonwealth Employment Service. But we can say unemployment is high and transparency is very low.

Even if we admit that outsourcing arrangements have screwed us domestically, we may still find the tax-incentivised global charity of Bill Gates, Tim Cook or Mark Zuckerberg as “inspiring” as their extraordinary products. But even leaving aside the facts that (a) no one but the market appointed these new liberal policymakers, and (b) tax concessions that the rest of us do not enjoy produced their wealth, private enterprise really doesn’t deliver public goods or natural monopolies better than those fat cats.

Yesterday, shadow Assistant Treasurer Andrew Leigh told Crikey: “Scorched-earth conservatives love to claim that the private sector is better at everything. But even if we weren’t worried about equity, it’s far more efficient to have government provide public goods. Everything from national defence and national parks to footpaths and firefighting would be far more expensive if they were provided by the private sector rather than the government.”

There’s just no effective way of privately charging a citizen every time they use a footpath. And there is no adequate way to express our admiration for all the genuine “innovation” produced in state-run scientific labs.

WTF, as private sector users of wi-fi might publicly ask on a world wide web only made possible by state-funded innovation. This is one of several CSIRO departments facing the possibility of closure following funding cuts by the Coalition government.

“You would think Malcolm Turnbull, who supposedly ‘invented the internet’ in Australia, would understand the importance of public funding for our key research institutes like the CSIRO,” ACTU president Ged Kearney told Crikey yesterday.

And you might think that even within this slim budget envelope that CSIRO management might see the need to keep on “inventing” the internet. But along with other public good research like climate change, land and water, manufacturing and nutrition, this area is now left to privately funded research and development, which has never been strong in Australia.

The CSIRO justification for this and other funding reallocation has been even more frustrating than a memory of life before wi-fi. “You will not find anyone who can really give you a rationale. The attempted justifications can be contradictory,” said Dr Sam Popovski, a former biochemist and now secretary of the CSIRO section of the Community and Public Sector Union (CPSU).

While private sector investment in scientific R&D remains flat — and virtually non-existent in fields, like climate change monitoring, unlikely to turn a profit — CSIRO management appears to have decided to put its remaining resources into market-friendly research.

“This is about diverting resources into what the market might want,” said Popovski. That these projections are made in economically dicey times aside, they seem to have an unusual view of CSIRO’s relationship to its primary funder, the taxpayer.

Around two out of every three CSIRO dollars are provided by us. This has been the ratio for some time and is unlikely to change anytime soon. While the public might expect an organisation with an exemplary record, the meat diet notwithstanding, to do stuff like, you know, assess the condition of the Great Barrier Reef, CSIRO management appears to see its most important stakeholder as private enterprise.

The CPSU, whose membership stands at 50% within CSIRO, is currently battling the institution’s value proposition to both government and to management. Both CSIRO management and the Coalition government now seem to think that the private sector cannot only deliver all the public goods we need, but that the taxpayer should fund advantage to the private sector.

This, apparently, is “innovation”, the emptiest term of the current era and a great contender for Worst Word of the Year. 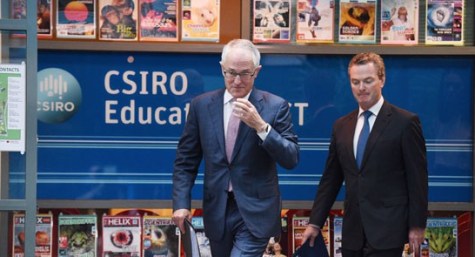 Oz Post and Medibank the cream of the public sector earners

Thank you for this, Helen. Crystal clear and to the point exposition of uncommon good sense.

Back in the 1950’s Australia had the fifth, yes the fifth, electric computer in the world built by the CSIRO. They “decided”, ie were told by Government, that computers were not in their mission so they dropped developing computers to concentrate on important stuff like rain making – as we know computers fall out of fashion and rain making is a billion dollar industry.

Rain making? Well, if only they’d jumped on cloud computing back then. Could have beaten Amazon, salesforce, google to the game. 🙂

Lamentably accurate, Helen!
Having been one of the few academics in Australia who has actually given rigorous lectures to Masters students in innovation strategy, I was initially hopeful, but wary of Turnbull’s enthusiasm about “innovation”. It didn’t take long to determine that he, and his little acolyte Roy, are flakes of the first order. You know what it’s like when an over-enthusiastic amateur who has read a couple of articles in Wired starts to throw the buzz-words around – it sounds OK to other amateurs but it makes the professionals cringe.

I’ve realised for a long time that one of the reasons for the misuse and abuse of the word “innovation” is that there is no widely accepted definition – try Googling “Innovation definition” – it retrieved 390 million hits a moment ago! Further, unlike almost every other area of human endeavour that one can imagine, there is not one book in the world that can be described as a “handbook of principles” – sure, there’s plenty of heroic biographies of “innovators” (Jobs, Gates, etc) and many academic research articles on “national innovation systems” and the like. But nothing that – like other areas – starts with definitions and axioms and premises and then builds on this foundation to look at corollaries and consequences i.e. “academic rigour”. In the absence of such literature, Humpty Dumpty reigns.

I have embarked on such a book, but I now fear that I will have to call it something else, for fear of being branded as a populist flake as well.

For anybody who is really interested in coming to grips with the concept, they can look at drafts of some early chapters at my website at http://www.thepicketline.net/innovation. But I suspect that most of the interest will come from China and India and maybe some remnants of Silicon Valley.

Great article Helen, thanks. I suspect that agile and innovation from the mouth of the current PM are code for making money. Same for the venture capitalist now heading up CSIRO. Watching the disembowelling of CSIRO is one of the saddest public exhibitions I have ever witnessed – and I am not a scientist, although I do have friends and neighbours who have or currently do work at CSIRO.

Yes MJM, I agree. I also am not a scientist…but having grown old with the CSIRO and all its’ wonderful achievements, neither the organisation, nor the people in it , deserve the treatment now being metered out by this government.
Hopefully, we will have a different government on July 2…and it won’t be too late to save CSIRO from the money-grubbing pollies/private sector!