Why did The Times halt its print run? Plus other media tidbits of the day.

The Times revolts. A revolt by staff reportedly forced the management of The Times, the Murdoch clan’s quality daily in London, to change its front page on Wednesday mid-print to include the Hillsborough inquest verdict story. UK media reports said the first front page didn’t mention the verdict (nor did the Times’ stablemate, The Sun), but after an adverse reaction from staff on the paper’s sports desk and a bucketing of the paper on social media, the change was made while the presses were running. The Guardian explains:

“The verdict was not on the front page of the first edition, but a picture of a man shovelling snow was replaced with an image of relatives of the families of the 96 Liverpool fans who died. The masthead was changed to highlight coverage inside the newspaper under the heading: ‘Hillsborough: an end at last to the smears and lies.’

“Such was the strength of internal and external feeling that the Times, along with its News Corp stablemate, had ignored the story that 96 people were unlawfully killed, that it put out a statement confessing to an error rather than a conspiracy.”

Rumours suggested that the presence of Rupert Murdoch in the Times newsroom on Tuesday might have led to the original decision, but John Witherow, The Times’ editor, told The Guardian: “We made a mistake. We put it right.”

The Sun also didn’t put the story on its front page, or point to its presence deeper in the paper. But The Press Gazette pointed out that the paper again apologised in an editorial in the Wednesday edition, saying:

“The supporters were not to blame. But the police smeared them with a pack of lies which in 1989 which The Sun and others in the media swallowed whole. We apologised prominently 12 years ago, again four years ago on the front page, and do so unreservedly again now. Further, we pay tribute to the admirable tenacity of the friends and relatives over so many years on behalf of the 96 who died.”

It would be nice to hear a statement of contrition from Rupert Murdoch. After all he and his family have controlled The Sun (and The Times) since 1989 and has allowed the lies and rubbish about what happened at Hillsborough to continue unchallenged by his media group. Former Sun editor Kelvin MacKenzie has apologised, why not the owner of The Sun? — Glenn Dyer

Immersion journalism. What is it like to be in solitary confinement? The Guardian is pushing the boundaries of technology to show people exactly how it feels. The masthead’s “first virtual reality experience” invites readers to put their smartphones in a 3D cardboard virtual reality viewer and find out.

Video of the day. Kevin Rudd is sort of funny, mostly weird on The Weekly … 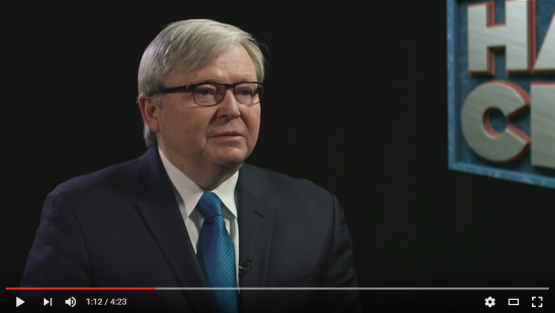 Murdoch having compromised the UK constabulary through NotW then had to keep them sweet, handling their PR – lest they take a better look at what his Muppets were doing?

Kevin the Gypsy – “You will be run over by a shambling abbott with a silver forked tongue – forget about UNfinished business.”

For anyone feeling depressed about the levels of funding current Faux Progressive propaganda, reading Crikey helps them realise it would be far worse if the Crikey Commissariat and their dutiful Censor were in charge of Australia.