Crikey readers discuss politics and other issues of the day.

On pokies in RSLs

CEO RSL and Services Clubs Association Garrie Gibson writes: Re. “Tim Costello: RSLs that use con job pokies dishonour the Anzacs” (Tuesday). RSL Clubs take great pride in the central role they play in local communities. Around Anzac Day, that role is brought to the fore, and many in the community, including in the media, reflect on that role. As they’re among the most stoic institutions in the country, RSL and Services Clubs welcome both positive and negative reflections. Yet there are limits to the attacks we will tolerate in silence.

According to Tim Costello, a tireless campaigner against gambling, RSL clubs are “screwing over their mates”, dishonouring the Anzacs and treating the community like “cannon fodder”. In his “op-ed” published in Crikey, Costello invokes the Anzac spirit and memories of the fallen in support of his newest campaign.

This, Mr Costello, is entirely not OK.

For RSL Clubs, remembrance of our fallen soldiers is not a persuasive tool. It’s not just a biannual event on Anzac Day and Remembrance Day. Rather, it is daily ritual. It is very real, deeply emotional, with tangible impacts. RSL and Services Clubs financially support the daily Last Post ceremony held at the Australian War Memorial that broadcasts online and throughout clubs nationally. Each day, the Last Post ceremony honours a specific soldier who died for their country. For the descendants and families of those soldiers, these are special moments, as they are for clubs and members. It’s core to our purpose and not a “distraction” as Costello put it.

Another core purpose of RSL Clubs is to assist veterans from modern conflicts. We do this by offering financial assistance, health and counselling services, help with housing, employment, and educational support for families of veterans. RSL Clubs and RSL sub-branches have been supporting efforts to save the lives of veterans suffering PTSD, other mental health issues and physical injuries. A fundraising campaign, raising a million dollars for RSL LifeCare’s Homes for Heroes program, has been underway for 12 months. With an estimated 3000 homeless veterans in Australia, Homes for Heroes is providing accommodation and support services to help struggling vets get back on their feet.

This Sunday, clubs and sub-branches, local businesses and members of the community will participate in a fundraiser walk around Parramatta Park in support of Homes for Heroes. Forty-two kilometres long, the relay travels a kilometre for the life of each Australian soldier lost in Afghanistan. The Anzac spirit, the remembrance and support of past and modern veterans are not idle campaign messaging tools, Mr Costello. These are treasured values that shouldn’t be flippantly thrown around in support of your latest campaign effort.

RSL clubs are acutely aware of the responsibilities that come with gaming and are open to hearing responsible views and ideas. But if your opening salvo in this campaign is anything to go by, you appear more interested in deeply hurtful insults rather than collaboration.

Ben Marshall writes: Re. “Neoliberalism is fine, but what we have is crony capitalism” (yesterday). I thank Bernard Keane for shining a light on the principles of neoliberalism. I often rail against it.  Needing to sum up complex issues that I perceive to be wrong with the world, I blame it for all sorts of things. Bernard Keane’s article has helped me understand better why I do so, why neoliberalism will always be intrinsically undemocratic, and why it will always devolve into an unbalanced mess of entrenched corrupt power against the people.

Better laws, regulations, public services and government don’t automatically require the ‘correction’ of the neoliberal values Keane praises, especially those that ‘abandon’ each individual to his or her fate.  Not one of the ‘greater goods’ Keane mentions is in and of itself automatically better for us or our nation – not privatisation, not deregulation, not tariff elimination.  Especially when most movement in those areas has been motivated by the powerful in the interests of the powerful.

We didn’t just get into the polarised economic and political mess we’re in overnight, and many of the improvements — like healthcare — that Keane attributes to neoliberal principles would have occurred regardless.

The ultimate issue for me is biological.  I regard myself as an individual but, studied as just another animal, I’m utterly social and highly connected.  I share my intelligence, my work, my behaviours and my genes with my species, and to pretend that an ideology like neoliberalism trumps this crucial aspect is naive.

I’m of average intelligence, yet I’m baffled by the world.  I depend my species to understand enough of it to aid my decisions and thinking.  Pitting me against you, and you and me against everyone else, is simply not how our species functions. Crony capitalism isn’t an anomaly but a feature of neoliberalism.

Lotto promotion has Anzac Day by the balls 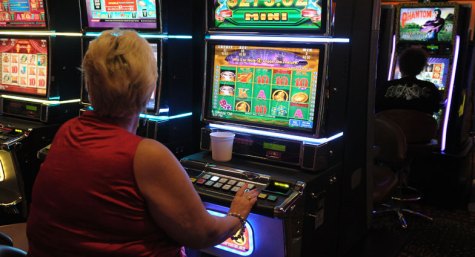 “RSL clubs are acutely aware of the responsibilities that come with gaming and are open to hearing responsible views and ideas.”

So the RSL believes it’d be irresponsible to just get rid of the fucking things? Or is ‘hearing’ completely unrelated to ‘considering and implementing’?

Although not a regular visitor of RSL Clubs but being a member believe they do a tremendous job overall. Gambling in general should have been left in the Club industry where it is best serving for the community.
Some people do not like any gambling and myself have a Keno or lottery ticket a few time a year. You can not protect everyone from everything bad so lets promote self responsibility while assisting others.

I went to our local pokies tonight and did $60. It’s not an RSL and I can’t blame anyone but myself! PLUS they had no Old on tap.

Late to this article, but it’s an interesting one, so here’s my cent’s worth… I agree that RSL clubs do a good job overall and it’s at a state / government level that pokies need reforming legislation. The fact is, as a nation we gamble too much, it’s international news ( http://bit.ly/2bA343O )… Reforms such as the $1 betting limit can’t come soon enough as the impact on low income communities ( http://bit.ly/20dARy4 ) can be devastating. Time for the politicians to stand up to the gambling companies and deliver for the people.

Please, Why do we always turn to the politicians to Nanny the country. The latest changes to all forms of betting are just another way to curtail a humans rights. We in Australia are supposed to be free. Sure we need laws but seriously, the work we need to be doing starts with education and not prohibition. It does not work people. http://www.australiancasinoclub.com/features/australian-gambling-authorities-and-regulations.htm.
Lets educate and allow people to live their lives without big brother interfering more and more. I’m still to see a law reversed.

I am so late to this article…