Parties party in the USA. The Liberal Party, Labor and the Greens spent more than $2 million of taxpayers’ money sending their members overseas to meet with like-minded political parties in the last financial year, freedom of information documents show. The Australian Political Parties for Democracy Program was established in 2005 and is ostensibly to fund major political parties to further the development of political party systems in partner countries — but it is also used to attend junkets in overseas locations. Previously under the AusAID budget, it is now managed by the Department of Finance.

The Labor and Liberal parties are allocated up to $1 million in grants under the program, and the Greens are allocated up to $200,000. Half of the money spent by each party is required to be used visiting countries eligible for Official Development Assistance, with countries such as East Timor, Bangladesh and Myanmar visited by the two major parties. The Liberal Party also used the program to spend $115,612.56 on sending Liberal representatives to meetings of International Democrat Union, an alliance of centre-right parties across the world, of which the United States Republican and British Conservative parties are members. Both Labor and the Liberals have already used the program to visit the US, including more than $30,000 spent by the Liberals visiting the Republican Party in October and November 2014. Labor is investigating the conduct of its members in the program, after allegations they were campaigning for Democratic candidate Bernie Sanders.

Tim Wilson, campaigning in Wentworth. Former human rights commissioner Tim Wilson and now candidate for the safe Liberal seat of Goldstein, Tim Wilson, is holding a fundraiser for his campaign — in Woolloomooloo, hundreds of kilometres away from the Melbourne electorate. The fundraiser, to be held on May 15, is hosted by the Young Liberals, with a $100 price tag for members and a $120 for others. 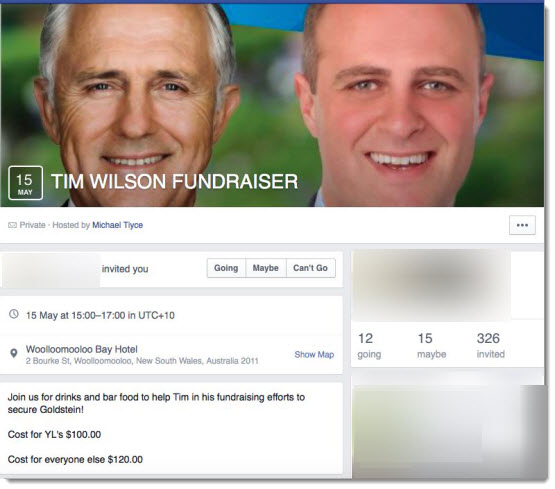 Support is good wherever you can get it …

Selfie democracy in America. Social media company Snapchat is heading to court in the United States to fight for voters’ rights to take a selfie while in a polling booth. According to The New York Times, taking photos in polling booths is illegal in some states of America, with jurisdictions like Pennsylvania and Vermont charging fines of $1000 for people who take a snap of their votes. In New Hampshire, a federal court decision overturning the ban is being appealed, and Snapchat, the company responsible for photo messages that self-destruct within 10 seconds, has filed an amicus brief defending the “ballot selfie” under the First Amendment right to free speech. It says “a ballot selfie is a uniquely powerful form of political expression” in a rousing defence of photos that only last a moment:

“Ballot selfies are the latest in a long historical tradition of voters sharing their civic enthusiasm — and their votes — with their social networks. During the nineteenth century, voting was more than casting a ballot. Election Day was a social occasion, with political parties sponsoring raucous gatherings at the polls. The public spectacle led to high voter turnout, as voters lingering to see and be seen drew in even more neighbors to vote and mingle. The secret ballot put a stop to parties at the polls, but the practice of advertising one’s political pride has continued. Starting with the 1896 election, voters wore their pride in the form of campaign buttons, signaling their support for candidates and causes. And in recent years, voters have flocked to the ‘I Voted’ sticker to show their civic engagement. Whatever its form, the voter’s message is the same: I’m participating in the civic process, and you should, too.

“Ballot selfies are thus all at once deeply personal and virtuously public expressions.

“The ballot selfie captures the very essence of that process as it happens — the pulled lever, the filled-in bubble, the punched-out chad — and thus dramatizes the power that one person has to influence our government. But beyond that, ballot selfies help the media perform its watchdog role in elections. Ballot-design problems — whether butterfly ballots, hanging chads, or some electronic glitch with computer screens — have all too frequently disrupted the orderly democratic process. A ballot-selfie ban like the State’s could deprive the public from learning about those problems or validating what might otherwise be dismissed as just unfounded anecdote.”

Opponents to photos in voting booths argue that limiting photos protects the right to a secret vote. We called the Australian Electoral Commission to ask if there were any rules around taking a selfie with one’s ballot in Australia. While there’s no ban on photos here, the AEC doesn’t advise people to take photos so they don’t compromise the secrecy of other voters’ ballot papers.

Palmer basically Bobby Sands. Embattled MP Clive Palmer is defending his record in a YouTube advertisement labelling him a “political prisoner”. The advertisement, which features photos of Palmer behind razor wire, features a voiceover saying:

“Everyone’s entitled to a fair trial in Australia, unless you’re Clive Palmer, then it’s trial by media. They’ll stop at nothing to get him out of government. Release Australia’s political prisoner and see more of the real achievements Palmer United has made for our country.” 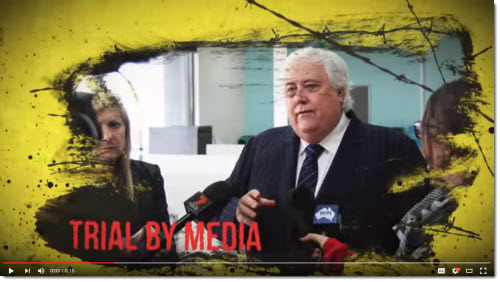 The ad is authorised by Declan Sheridan for the “Committee of Free Speech Brisbane”. The Australian reports Sheridan is a close friend and business partner of Palmer’s daughter Emily Palmer.

Baby, you can drive my car. Independent Senator Jacqui Lambie is selling her car for charity — including the personalised “Lambie” number plates. Lambie wrote on Facebook “proceeds will go towards raising the children of Yolande (who tragically drowned in Somerset, Tasmania) this year”. The “bad girl” will be auctioned at a date to be confirmed: 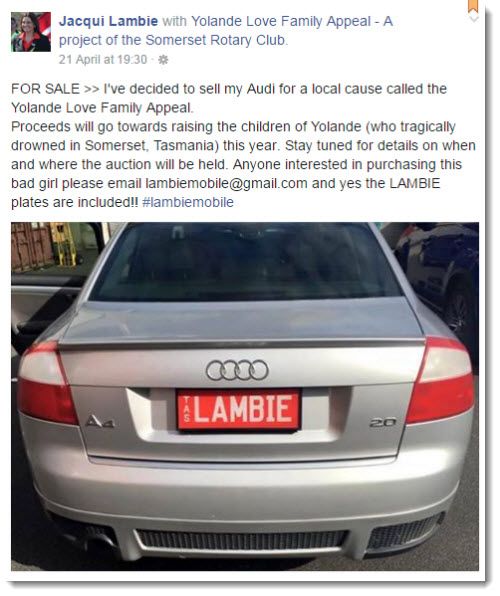 OMG, how clueless can you get? “During the nineteenth century, voting was more than casting a ballot. Election Day was a social occasion … The secret ballot put a stop to parties at the polls”. Well, yes, that’s the point. If you’re able to show people how you’ve voted, it’s not a secret ballot, because whoever’s bribed or threatened you can demand to see the selfie as proof. If you want parties, set up a sausage sizzle outside: don’t compromise on the integrity of the ballot.