The Sun in Britain has not made much of its shameful reporting of the Hillsborough soccer disaster. Plus other media tidbits of the day.

Sun goes dark. Perhaps the biggest media loser from the Hillsborough coronial inquiry decision is the Murdoch clan’s UK tabloid The Sun and its former editor Kelvin MacKenzie. Unlike its initial reports on the tragedy in 1989, and its cover-up for more than a decade after that, there was minimal mention this week in the paper of the The Sun’s rotten role in reporting of the tragedy at Hillsborough Stadium in April 1989, during which 96 people were killed and dozens badly injured.

The Guardian reported the background here to The Sun’s disgraceful reporting of the tragedy and its aftermath:

“The newspaper, edited at the time by Kelvin MacKenzie, who was personally responsible for the headline The Truth, ran claims from anonymous police officers that, as people were dying at Hillsborough, their fellow supporters stole from them, urinated on police officers and beat up ‘brave cops’ trying to help. The stories were initially defended by the paper as vital reporting of the truth, but it emerged in 2012 that they were sent by a Sheffield news agency, White’s, and run by the Sun almost verbatim.”

The claims in The Sun story that some Liverpool fans had urinated on police and had picked the pockets of the dead were found to be entirely without foundation and the end product of a smear campaign to shift blame onto victims. The reports were run in 1989, but MacKenzie waited until 2012 to apologise. UK media reports at the time said MacKenzie was ordered to apologise by Rupert Murdoch. MacKenzie is back at The Sun as a columnist. The Sun has described the story and front page as the paper’s “most terrible mistake in our history”.

But the main story on the website this week didn’t mention that (only a pointer in the story to the paper’s 2012 report). — Glenn Dyer

NYT won’t always have Paris. Earlier this month The New York Times announced an ambitious plan to boost its digital presence, creating at least 35 jobs in London and spending US$50 million on the new drive. Overnight the other shoe fell as the paper revealed plans to close its long-time editing and pre-press hub in Paris for the paper’s international edition (formerly the International Herald Tribune) and relocating those to London.

The decision was driven in part by restrictive French employment laws. As a result, up to 70 jobs (out of 254 employees on the international edition) will be lost in Paris as the paper ends a major presence in the French capital, which it has had since 1967, when it bought a half-stake in the International Herald Tribune. The Times jointly owned the IHT with the Washington Post before taking full ownership in 2003, renaming it the International New York Times in 2013.

The decision to move editing and pre-press print production to New York and Hong Kong is part of sweeping plans to redesign the international edition “to make it better, more relevant and crucially, more economically sustainable in an increasingly digital world,” the Times leadership wrote in a memo to staff overnight. These changes will include the top-to-bottom redesign of the paper.

The move is expected to cost US$15 million, including US$13 million related to relocation and severance payments and US$2 million of lease impairment and other contract-related charges, the company said in a short filing with the US Securities and Exchange Commission.

The move is the latest part of a wide-ranging review of the paper’s newsroom strategy as it braces for continuing declines in its print business. It has warned that the restructuring could include further job cuts. The Times has set a goal of doubling digital revenue to US$800 million by 2020 and, earlier this month, said it would invest US$50 million over the next three years to expand its international digital readership and sales. — Glenn Dyer

Internet cuts newspapers’ lunch. It’s a sign of the times: Britain’s famous national newspapers are about to fall even further behind their major competitors for advertiser spending in TV and the internet, and especially mobile, which continues to gobble up ad dollars, undermining newspapers and magazines. In fact, national newspapers lost 155 million pounds in ad dollars last year as spending fell across the board, and ad spending on the papers’ website fell far short of covering the gap.

And by the end of next year, British outdoor advertising (posters, roadside signs, etc) will be dragging in more ad revenues than the UK’s much-vaunted national newspapers such as The Sun, The Times, The Telegraph and the Financial Times. For the owners of these storied titles, it means more financial pain, more “reviews” and more job losses and cost-cutting along the lines The Guardian has undertaken in recent months, and which will happen at the Telegraph in the next few months.

Figures from the UK Advertising Association released overnight revealed that national (newspaper) news brands and their websites (such as the Mail Online and Daily Mail) suffered an 11% slide in ad revenues in 2015 to 1.2 billion pounds. The association’s report said print ad spending fell 13.4% to 1 billion pounds and that overwhelmed a 2.5% rise in digital ad spending to 220 million pounds. Among the different types of newspapers, tabloids recorded a sharp 16.7% slump in ad spending, while broadsheets had a slower 9.2% slide to 435 million pounds.

The Advertising Association’s report shows that by far the biggest slice of the advertising pie went to “internet” — which attracted 8.6 billion pounds last year, a rise of 17.3%. The report does not provide a breakdown of how internet advertising is spent, but like in the US and Australia, Google and especially Facebook are the major online/mobile players. Internet ad revenues are forecast to rise 11.5% this year and 10.6% next year. Mobile ad spending in the UK last year soared 61.1% to 2.6 billion (more than double the amount spent in national papers) and is forecast to jump 36.6% this year and be the biggest factor in the forecast 11.5% overall rise. — Glenn Dyer

Front pages of the day. Almost every newspaper in Britain splashed its front page with news of justice for the victims of the Hillsborough disaster … 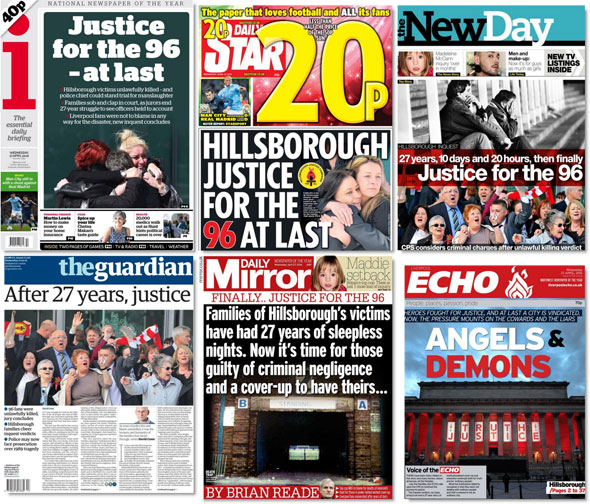 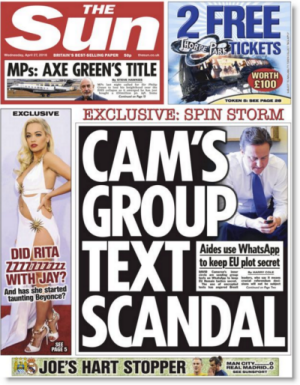 “The decision to move (New York Times) editing and pre-press print production to New York and Hong Kong is part of sweeping plans to redesign the international edition ‘to make it better, more relevant and crucially, more economically sustainable in an increasingly digital world'” . Is it not astounding that bare-faced spin and deception are now totally acceptable not only to politicians but also to the corporate world including the news media which at least we should be able to trust. Yes, probably an economic matter but “better and more relevant(?)” when the article also states “restrictive French employment laws” – clearly, the NY times is doing what Nike, Gap and all the rest have done – move operations to country with lower employment standards.