Red ink for everyone. When is an opinion piece worthy of the front page? When it’s an “exclusive”, of course. The Australian Financial Review took on The Australian, attempting to outdo it for most ridiculous reason to splash the red ink today, labelling Deloitte’s Chris Richardson’s budget analysis an “exclusive opinion”. 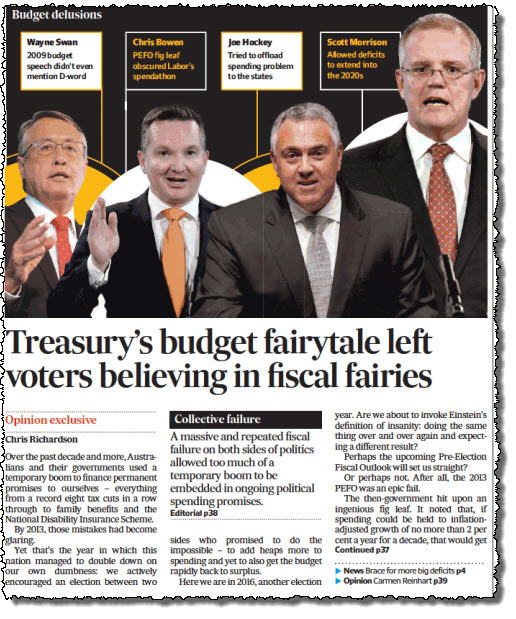 Abbott’s mea culpa, kinda. Former prime minister Tony Abbott’s series of essays in Quadrant on his prematurely ended prime ministership reveal yet another definition of “no sniping and no undermining”. Making sure that he is not forgotten by his colleagues and the electorate, Abbott acknowledges some mistakes, like not doing enough long-form media interviews, before turning all the blame onto the “people” who booted him out:

“Looking back, the Abbott government’s biggest problem was people’s reluctance to accept that short-term pain might be needed for long-term gain.”

“At the very beginning of the Abbott government’s life, I made a series of decisions that were reasonable, even self-evident in principle, but which created much resentment in the party room. I stopped the employment of immediate family members in MPs’ own offices because of the inevitable perceptions of favouritism; I ended first-class overseas travel out of respect for taxpayers; and I restricted family travel within Australia and spouse travel overseas because family very rarely accompanied business trips in the private sector. These were perks that many MPs had understandably enjoyed and that previous prime ministers had tolerated. In some cases, having a spouse in the office, paid or unpaid, may have helped MPs’ work. With the benefit of hindsight, at the very least, I should have handled this more sensitively.”

“In retrospect, the small things that annoyed people tended to outweigh the big things that pleased them. There were always people willing the Abbott government to fail but I made some unnecessary enemies and left too many friends feeling under-appreciated. The Australian newspaper, for instance, welcomed the China free-trade deal but on its front page criticised the government for its inability to market its own success.”

While the piece has been labelled a “mea culpa”, we think it’s more of a “suae culpae”.

Murdoch back at work after nuptials? According to London media reports, Rupert Murdoch has been seen in the newsroom of The Telegraph, the conservative daily that is undergoing a top-to-bottom review for its owners, the reclusive Barclay brothers. That review will mean severe cost cuts and the loss of dozens of jobs, or it could result in the paper being prepared for sale. The results of the review are due next month, according to previous report. Because News Corp owns the Times and Sunday Times, a sale of The Telegraph to Murdoch is not seen as likely. The Guardian points out that News UK prints The Telegraph, so Murdoch could have been discussing that. But he has a CEO to handle those talks in Rebekah Brooks, and other executives on the commercial side of his UK arm. This is the first major sighting of Murdoch for a month.

Baby’s first investment property. While Malcolm Turnbull’s negative gearing announcement on the weekend highlighted the government’s laudable commitment to ensuring that Sydney’s one-year-olds could buy investment properties, you’d think his office would at least go to the trouble of checking the name of the relevant infant. The transcript released by his office, however, named her as Julian and Kim Mignacca’s “little daughter Adison”. Addison’s reaction to either the misspelling or the government’s determination to protect her right to acquire an extensive property portfolio before she can read remains unknown.

True to form today’s imagined ‘tips’ are summed up perfectly by the final lyrics of a popular song which concluded with, “Perhaps, perhaps, perhaps.”

Let me help you out here. The reason you were voted out by your colleagues is largely due to the fact that you should never have been there in the first place. Your key quality is belligerence, nicely mixed in with industrial strength denial and a healthy dose of rank stupidity. Some are of the opinion that the fact that you were a Rhodes Scholar indicates that you must be a smart fellow, but education and connections do not make you smart, and you aren’t. You’re essentially an accident of circumstance that should never have got as far as you did.

Having achieved far beyond your capabilities, you were found to be no good at the job and about to lose the next election, so you were knee-capped.

That is why you are not the current PM, you don’t need to consider it any further, I have done your thinking for you. No problem!

The weirdest aspect of the Abbotrocity’s delusion is that it is shared by the usual suspects in the meeja. Blot, GogMagog Sheridan, Rat Hately et al still perform their loyal toasts by passing their glasses over the water for the Pretender to return from exile.
So perfectly named by Ms Undivine as the DelCons.