The Sunday Territorian reckons Julie Bishop is so thin she looks like a POW herself. Would the same be said about a man?

I have no particular fondness for Foreign Minister Julie Bishop or her policies, but, for mine, the Sunday Territorian’s Bushranger column went too far in describing her as a “gaunt POW lookalike” in yesterday’s column. 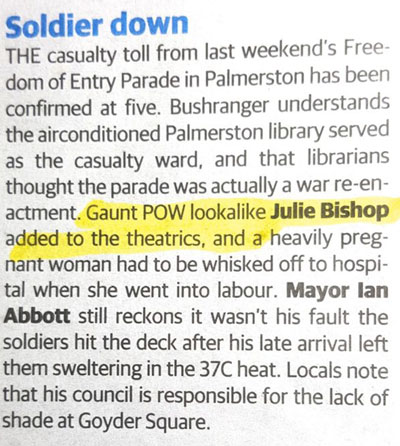 In the greater scheme of things what the Terror says doesn’t matter much — with a hard-copy circulation of about 16,000 few will see Bushranger’s opinion of Bishop, and it won’t surface online for a few days or so.

Bishop was in town to do a little pre-election campaigning with the Country Liberal Party’s member for Solomon Natasha Griggs.

Bishop and Griggs attended a keys-to-the-city parade at the Darwin satellite city of Palmerston that went hell-west and crooked wrong, not least for a few of the soldiers on parade who fainted in the 37 degree heat and humidity, apparently while waiting for the local mayor to arrive.

*Read the rest at The Northern Myth

Coalition contradictions become too many to count