Nigel Scullion has some explaining to do, writes The Mandarin journalist Stephen Easton. 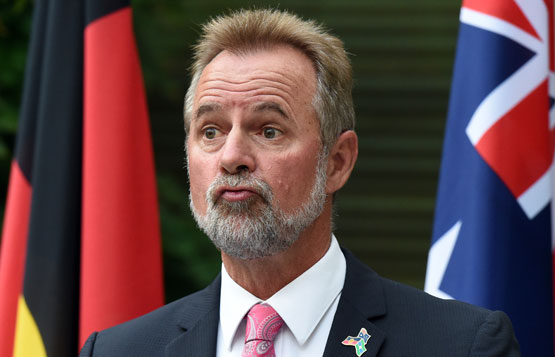 An attempt by the Minister for Indigenous Affairs Nigel Scullion to whitewash the Indigenous Land Corporation’s most recent annual report — an accusation he has previously sidestepped in questions from Senate estimates, and that he seems to have point-blank rejected recently — has been exposed by documents released on the body’s freedom of information log.

Scullion demanded the report, authored by the former board, be altered by the current board. One email refers to Scullion asking the current board to “reflect on and repudiate” a simple summary of recent history the minister felt was inaccurate.

The former ILC board, chaired by Dawn Casey, approved its annual report to send off to the minister on August 26 last year, but it took until February 10 this year for the report to emerge.

The reason for the six-month delay is now clear. Scullion was demanding the draft report submitted by the previous board be altered by the new board, chaired by Eddie Fry.

A draft briefing paper to the board from acting chief executive Leo Bator from January 16 this year reveals that Scullion threatened to “withhold permission to table the report” unless it was changed to remove passages he didn’t want published.

The passages that Scullion did not approve remained in the report, after the new chair could not convince a sufficient number of board members to vote in favour of the minister’s version.

Exactly what Scullion thinks was incorrect about Casey’s version of the ignominious events that led to the board’s replacement — which is accurate, according to the FOI documents and several sources who were involved — is not clear.

Scullion has yet to answer Crikey sister site The Mandarin’s questions from February 9, including whether he had queried any of the report’s contents, requested changes, or intended to request changes to it. He has recently provided a statement addressing some of these issues. A spokesperson for Scullion also provided four vague dot points regarding a different set of questions on the matter.

On February 12 Greens Senator Rachel Siewert directly asked if Scullion or his office asked Fry and the new board to amend the original report. His full reply:

“The ILC Board decided to include a statement from the incoming Chairperson in the 2014-15 ILC Annual Report outlining the focus of the new Board and its commitment to work with the Australian Government.”

When Labor Senator Nova Peris asked why annual reports from three organisations in his portfolio including the ILC had not been tabled in anything like the normal timeframe, he replied:

“I am not sure that they have not been, first of all. So we will just find out when they were tabled.”

The FOI documents show he approved the ILC report less than two weeks earlier, on February 1. In another answer given on notice, he said he had received the reports on time and they were tabled “subsequently” but did not specifically say that was about six months later.

Under previous legislation, Scullion would have been required to table the annual report within 15 sitting days but the Public Governance, Performance and Accountability Act, which superseded the Commonwealth Authorities and Companies Act, has no strict statutory deadline. Still, the Department of the Prime Minister and Cabinet’s guidelines and Senate resolutions have set the end of October as a reasonable deadline for public sector annual reports.

Scullion’s media adviser told The Mandarin on February 9 the minister and his staff were too busy with the Closing the Gap report to respond, despite the ILC annual report having been approved in the same office over a week earlier. We received the same response the following day, about an hour before the report was quietly tabled.

The passage that offended the minister referred to his decision that a public inquiry into the purchase of Ayers Rock Resort was not necessary.

In December 2014, Minister for Finance Mathias Cormann wrote to thank Casey for her dogged pursuit of the matter, adding he looked forward to “the outcome of the upcoming investigation”. He said Scullion was “more appropriately placed” to run it, and suggested the Indigenous Affairs Minister might also call in the Australian Government Solicitor or the Auditor-General.

Scullion wrote back detailing two previous reports by consulting firms and a 2013 performance audit of the ILC, which he said “did not make significant negative conclusions” about the Ayers Rock Resort transaction.

Within the FOI release is a timeline of the events that suggests ILC staff thought Casey’s summary of the various decisions and letters in question was accurate.

Bator’s draft board papers show he initially thought up three options to respond to Scullion: support the draft report as prepared by Casey, remove the parts the minister didn’t like, or remove the entire foreword and replace it with a new one written by Fry.

In the finalised paper on January 13 this year, Bator recommended the board agree to “replace the foreword in its entirety” with a new one that would be attributed to Fry, rather than just removing selected sentences. Bator wrote:

“It would not be appropriate to remove those parts … given the Chairperson’s foreword was signed by Dr Casey and her signature would remain on the altered document.”

Several drafts of talking points for Fry reveal he decided “the best course” would be to delete Casey’s foreword without inserting new text:

“This would be the neatest, and — I would have thought — least offensive course.”

The talking points confirm Bator and Fry had “significant discussions” with Scullion’s office about the matter and the minister wanted “full repudiation” of Casey’s version of recent history. But the only thing that would satisfy both the minister and the new chairperson would be to remove Casey’s words entirely and replace them.

Fry thought it would be a bad idea to just delete parts of Casey’s statement or “directly repudiate” her summary of events, but he was convinced that it was a top priority to resolve the “impasse” in order to fix the “strained relationship” that had developed between Scullion and the ILC in recent years.

The points note that a chairperson’s foreword is not a legal requirement of annual reports but is “generally considered to be good governance practice” and that:

“Under this option, the Minister and the ILC will still likely be called to account for the removal of Casey’s foreword.”

They weren’t called to account, except by Casey — who launched the FOI request — and The Mandarin. The ILC was not called before the most recent Senate estimates hearing.

Fry’s talking points also contain a supplementary argument he could use: that Casey’s foreword had gone beyond “the appropriate scope” for such a statement.

In the end, the annual report was released with Casey’s original foreword, intact, and the new statement from Fry pledging to drop the campaign for an inquiry into the ARR purchase.

The other board members refused to change the original foreword, but agreed to include Fry’s rejoinder. The released documents also shed some light on what the new board hoped to get in return for distancing the ILC from the campaign for an inquiry.

*Read the rest at The Mandarin

Didn’t Scullion and Tollner take grog on to a Tiwi Island’s dry community, July 2007 (around the time of Bough’s “intervention”)?

It is worth recalling that the only member of Fraser’s cabinet to reject Vietnamese refugees was Honest John. Nothing I saw in Abbott has made me think otherwise and I don’t see much in the present lot either.

If any competent analysts looks at this whole mess they would acknowledge that while the entire faux history industry might receive glowing endorsements from the Crikey Commissariat and its devoted camp followers, “It’s Time” the nonsense was exposed — not of course that this will occur in Crikey’s Dreaming Time bailiwick.