Isentia Index: What result awaits on July 2? The media is far less sure than it once was.

It's been an interesting week in Canberra, but all anyone seemed to care about was Depp and his dogs.

As we enter a couple of weeks of de facto election campaigning before the de jure campaign starts after the budget, the unlosable election for the once hugely popular Malcolm in the middle versus the previously hapless Bill Shorten has turned into potentially a cliffhanger, with the latest polls at 50-50 and many media pundits wary of predicting anything about the increasingly volatile Australian electorate, who clearly haven’t been awestruck by the PM’s first seven months in office.

PUP leader Clive Palmer moves one spot up to the top five as the Queensland Nickel issue continues to dominate Far North Queensland, with seventh placed Employment Minister Michaelia Cash managing to find time between unsuccessful crossbench negotiations on the ABCC legislation and successful negotiations on shutting down the Road Safety Remuneration Tribunal to announce that the federal government would guarantee QN workers redundancy entitlements, as Palmer continued to claim the company could be saved.

Member for Mackellar Bronwyn Bishop lost preselection, ending a long and very winding political career in which her colleagues’ views of her abilities usually didn’t quite match her own. We wonder if her website bronwyn.com.au will live on regardless? The winner was moderate operative Jason Falinski, who may have very little in common ideologically with his southern neighbour Tony Abbott, but relied on the numbers from Abbott’s man to win the day. They both went to Riverview, but you’d have to think it had much more to do with new found enmity between Abbott and Bishop than old school ties.

And finally Opposition Defence Spokesperson Stephen Conroy, who went into full Charge of the Light Brigade mode (as he is wont to do once every couple of years) as he attacked the Governor-General Peter Cosgrove, likening him to Sir John Kerr. He got a quick slap down from Bill Shorten, who called it intemperate and unnecessary, but missed the far more obvious charge of illogical, Conroy criticising Cosgrove for following the Prime Minister’s advice, the exact thing Kerr didn’t do. 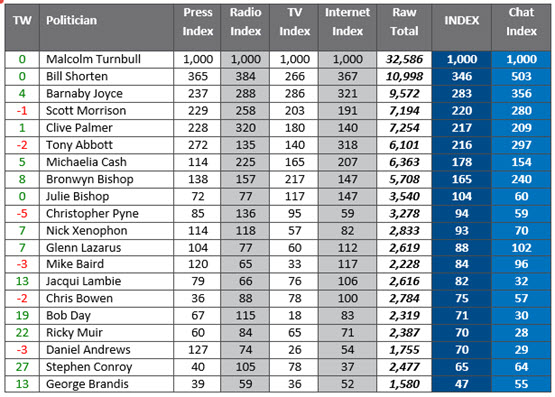 No big jump in online chatter greeted the reality of a July 2 election, you might even think most people still aren’t paying much attention to Canberra shenanigans.

A different story on talkback, as everyone lined up to give their views on whether Turnbull’s double dissolution move was brave or crazy brave.

Cap’n Sparrow may have looked more like an undertaker, and Barnaby Joyce couldn’t help himself, chucking a couple more colloquialisms across the bows, but at the end of the day, a few more million people perhaps understanding slightly better why we have such tight quarantine laws has to be a good thing, right?