Something’s in the water, literally: contamination and secrecy in the NT

The Department of Defence has some explaining to do, writes freelance journalist James Courtney.

Chemicals that pose a threat to human health and the environment have been detected in land and waterways surrounding a number of Department of Defence sites around Australia. The two chemicals are perfluorooctane sulfonate (PFOS) and perfluorooctanoic acid (PFOA).

In Europe, PFOA is classified as a reproductive toxin and is required to be labelled “may damage the unborn child”.

The Science Advisory Board of the United States Environmental Protection Agency has assessed PFOS and PFOA as “likely to be carcinogenic to humans”. These chemicals were historically used in firefighting foams.

A 2003 Australian Department of Defence report contained a clear warning on the danger posed by the chemicals: “PFOS and PFOA are toxic to humans, and both have been implicated with a variety of cancers.”

Defence announced on September 3, 2015, that PFOS and PFOA had been detected in groundwater at Williamtown RAAF base, Newcastle Airport and in seafood taken from Tilligerry Creek and Fullerton Cove in New South Wales.

On October 21, 2015, NSW EPA released a report containing sampling data. Test results were considered serious enough for the EPA to immediately apply the precautionary principle, issue health advisories against drinking water from bores, and close fisheries in a large area around Williamtown. 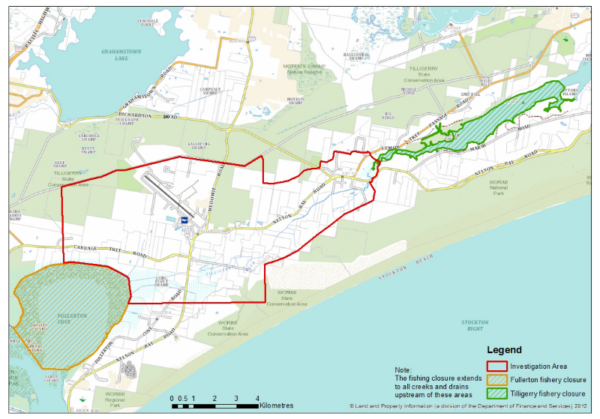 Within three months of the initial announcement on December 23, 2015, NSW EPA had released an interim report, written by an independent expert.

After six months they have released a set of comprehensive reports, containing all sampling data on seafood contamination, dietary exposures, groundwater and surface water tests. Findings include:

A Sydney Morning Herald report in 2008 suggests contamination was first detected at Darwin Airport 2003: “Darwin firefighter Steve Osborne said PFOS was ‘showing up’ in environmental tests when the NT fire authorities decided to stop using it five years ago.”

The issue was not raised again until October 2015 when a Darwin community group raised concerns. Shortly afterwards, on December 23, the NT News reported Defence would investigate contamination at Darwin and Tindal:

“The Department of Defence will investigate pollution caused by toxic firefighting foams at Darwin and Tindal RAAF bases, as fears grow about the possible impacts of the potentially carcinogenic chemicals.”

It’s important to note there has been no public evidence of Defence investigations. The first report by Defence to the Senate inquiry in April details its national investigation of military facilities but contains no references to Darwin or Tindal.

In an email communication with the author of this report, the NT EPA revealed that it conducted tests of Rapid Creek and Ludmilla Creek on February 16, 2016. They won’t say what the results are, only that they are “below Interim Draft Guidelines”.

The direct question — is it safe to swim in or eat seafood from Rapid and Ludmilla Creeks? — was left unanswered by the NT EPA.

The detection of PFOS and PFOA in waterways, plus questions being raised in a currently running Senate inquiry hearing, triggered the announcement on April 8 by the NT EPA that an investigation would begin.

Defence is not listed as a partner in the investigation, but it is stated the investigation is being undertaken “in consultation with Department of Defence and Darwin International Airport”.

The NT EPA are trying to say that the reason for their delayed response is that the issue just came to their attention with the February testings.

PFOS and PFOA contamination issues at airports have been known since 2003. How much contaminated seafood has been eaten since then?

Health impacts will be very difficult to measure given Darwin’s small, highly transient population, but the NSW EPA recommendations have been clear :  it is the families of recreational and professional fisherman that eat the most seafood and are at the greatest risk of exposure to dangerous levels of PFOS and PFOA.

In Darwin, Ludmilla Creek has been a significant source of food for the indigenous communities of Bagot and Kululuk. This should be acknowledged and investigated.

As it has been in NSW, the precautionary principle should be applied and fishing banned in Rapid, Ludmilla and Buffalo Creeks pending investigations. And the NT government should urgently assess the capacity and resourcing of the NT EPA to determine its ability to conduct the investigation required.

The reality is that the EPA is under-resourced, under-skilled and lacking the strength and political independence required of an effective regulator. This is a commonly held opinion within the environment sector of the NT public service.

*Read the rest at Northern Myth

Behind the Seams: who’s asking questions about coal seam gas and health?

From Trump’s ‘proud’ boy to Biden’s green guy, billionaire Andrew Liveris knows how to walk both sides of spin street

We will rebuild: the resilience of Darwin

This is disgraceful. The people of Williamtown have been devastated by this poisoning of their land, water and livelihood without any compensation apart from the paltry Newstart allowance. How many more unsuspecting communities will this happen to?