We've got your new Pulitzer winners for your perusal. Plus other media tidbits of the day.

Pulitzer winners: your new #longreads. For 18 months the Associated Press tailed ships and refrigerated trucks to expose the dodgy practices of the fishing industry in South-East Asia. The reporting led to more than 2000 slaves being freed — and it’s now won the news agency the top prize in American reporting. The Pulitzers were announced overnight, awarding AP the public service award for its forensic tale “Seafood From Slaves“.

The Pulitzer gongs, handed out by Columbia University annually, went to plenty of usual suspects, including The New York Times (international reporting for an investigation into women in Afghanistan and a photo essay on the asylum seeker crisis in Europe) and The Washington Post (a rich data project on police shootings). A year after magazines were made eligible, The New Yorker won prizes for Emily Nussbaum’s television criticism and a must-read feature on the potential for a devastating earthquake on the American west coast. Newer media got a look in, with an award for a joint ProPublica/The Marshall Project feature on a rape case in Washington State.

The Pulitzers also award fiction (The Sympathizer), non-fiction (Black Flags: The Rise Of ISIS) and biography (Barbarian Days: A Surfing Life), plus an annual award for drama which this year went to musical phenomenon Hamilton, the Broadway show seen twice by Barack Obama but sold out until well into 2017. — Jason Whittaker

Amazon is coming for Netflix … Australia’s market for streamed entertainment is already pretty crowded with Netflix and the rest (Stan, Presto, Quickflix, et al) so it’s unlikely another player would dare take it on. But then, there are few other companies in the world like Amazon. Yesterday the online retail giant announced it would launch its streaming service Prime — until now simply $99/year bait for premium Amazon customers — into an all-access paid monthly subscription offering.

Prime — which has had critical hits like Transparent and Mozart in the Jungle, and paid a bundle to secure the new project from the ex-Top Gear trio — has been available to customers in the United States, United Kingdom and Germany but only on the annual subscription (part of a premium offering headlined by two-day free shipping on Amazon goods). The new $9 monthly service pits it directly against Netflix in those markets.

Prime’s original shows have been carried by Stan in Australia. But does it have any interest in launching its own service here? We point to sightings of Amazon boss Jeff Bezos in Sydney this week. But also to the fact Amazon has already sold international rights to the New Top Gear to Netflix. Stay tuned. — Jason Whittaker

… while Netflix comes back to the pack. Has the fizz gone out of on-demand video streaming, or is it just Netflix? Wall Street thinks it’s the latter judging by the 12% slump in the Netflix stock in the minutes after the company revealed sluggish first-quarter figures this morning.

And the forecast for the current second quarter was weaker than expected as the company blamed the slide on last year’s spike in new customers on the official move to new markets, including Australia. Overall the streaming business added a total of 6.74 million new subscribers in the March quarter to 47 million domestic customers, up 2.23 million. It also had 34.5 million international subs, up 4.51 million. But that growth will slide to just 2.5 million new subscribers — half a million in the US and 2 million internationally, below market forecasts. The company reported net income of US$27.7 million in the quarter, 16.7% above the first quarter of 2015. Revenues came in on forecast at US$1.96 billion.

In January, Netflix launched in 130 new markets including India, the Philippines and Saudi Arabia. Netflix said in a letter to shareholders that it was in “continuing discussions” but had “no material update on our approach or timing” for the expansion into China. — Glenn Dyer

Weekends back for the editor. QWeekend — The Courier-Mail‘s Saturday glossy — got a new look over the weekend, and another new editor … Baz McAlister, a backbencher at the paper, got the call-up to edit the magazine in December — only to lose the gig five months later a fortnight ago due to, Crikey understands, some creative differences. He’s gone back to his old job as assistant night editor while Sue McVay acts in the weekly post. We asked greenish Courier-Mail editor Lachlan Heywood (yet to win over the newsroom like his predecessor Chris Dore, we hear) why the sudden shift — and whether they’re looking for a permanent replacement — but didn’t hear back. — Jason Whittaker

SMH‘s muted celebrations. It’s the party you have when your company is near-broke and the milestone isn’t much of a milestone, as celebrated Sydney Morning Herald hack Kate McClymont noted yesterday … Front page of the day. We had to … 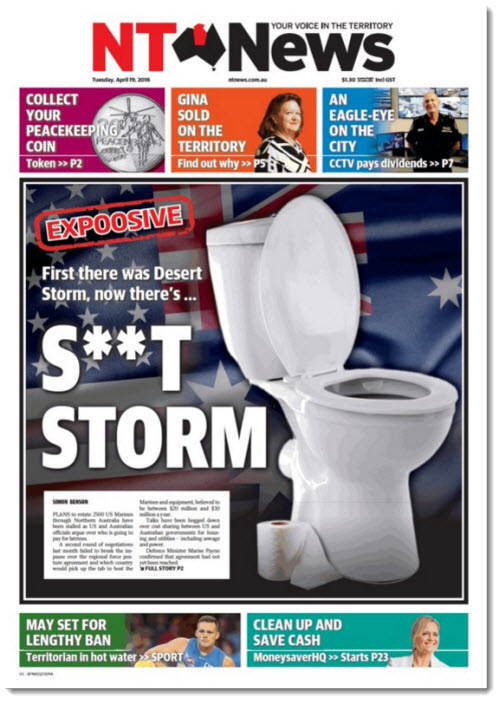 How unusual, no croc – is it meant to pop up out of the ceramic pedestal?