Truckies and unions were summarily dealt with, so what the hell do MPs do now? 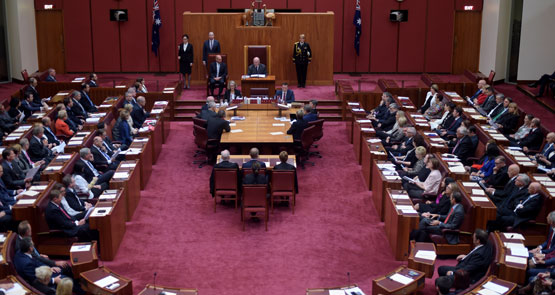 This is the way a 75-day election campaign begins. Not with a bang but a whimper.

This wasn’t to be a repeat of last month where Labor and the crossbench dragged out the Senate debate all night to discuss the issues. “Get it over with and bring it on” seemed to be the play.

For what had been a hotly anticipated battle between Labor and the Coalition on two industrial relations issues, none of the excitement in the Parliament that day was related to the policy issues at hand.

The first was over whether Governor-General Peter Cosgrove had accidentally snubbed deputy Labor leader Tanya Plibersek when he spoke in the Senate on Monday morning. This was all resolved quick-smart after an apology, but the G-G remained the centre of controversy for most of the day after Labor’s Stephen Conroy, being his usual outspoken self, made the comparison between Cosgrove agreeing to prorogue Parliament and Sir John Kerr’s acts in 1975.

Ignoring that the long-standing tradition of the G-G acting on the advice of the Prime Minister, very few complaints were made when Quentin Bryce talked about her government planning to “repeal the carbon tax, abolish the mining tax, cut the waste and build the roads of the 21st century” when she opened Parliament at the beginning of the Abbott government’s term in 2013.

Turnbull admonished Conroy, as did Shorten. And things moved on.

By question time, there was an air of inevitability about this all finishing up by Tuesday. Labor attacked Turnbull on the banks and donations, the Coalition asked Dixers about the Road Safety Remuneration Tribunal and the economy.

Despite ditching Q&A because he needed to be in Parliament, Clive Palmer was a no-show in question time, with a bright orange pillow seated between the potentially soon-to-be-former member for Fairfax and MP for Indi Cathy McGowan.

Tony Abbott sat with his head down, flipping through a large pile of papers on his desk. As one Twitter wag had it: correspondence with his electorate, or letters to Mackellar preselectors?

All eyes were on Bronwyn Bishop, who turned up to question time halfway through, only to keep her head down the whole time, like her new frenemy Abbott. Bishop has just a few days left to give her valedictory speech, so this revenge won’t be a dish served cold.

The video of Johnny Depp’s groundbreaking performance as a sad hostage to Australia’s strict agricultural laws dropped halfway through question time, and by 3pm, it was all anyone was talking about.

Journalists gathered in the mural hall to hear the first review from Deputy Prime Minister Barnaby Joyce. Joyce said he was quick to share it on his Facebook page, and hoped it was viewed far and wide. He said he wouldn’t mind seeing it on incoming flights, but that would be up to Qantas to decide.

Tourism Australia must be keen for the best ad for our country since Scott Morrison’s “Where the bloody hell are you?”

Joyce’s performance on the day was much more subtle than last year when he told Depp’s dogs, Pistol and Boo, to bugger off.

A few days as acting prime minister changes a person.

Word spread that the ABCC legislation could be voted down in the Senate by 6.30, and as the night wore on, it was clear the bill was going down not so much in flames, but as though the government had managed to pull off the plan in The Producers and set up legislation it knew would fail.

In the end, Jacqui Lambie, Glenn Lazarus, John Madigan and Ricky Muir sided with Labor and the Greens, and the government got its double dissolution election trigger.

The Senate also dealt with the Road Safety Remuneration Tribunal abolition in a matter of hours after the government gagged debate, and it passed before 10pm.

On a crisp Tuesday morning in Canberra, the halls of Parliament are busy as any normal sitting day but no one is quite sure what exactly is supposed to happen today. Parties are holding their usual Tuesday sitting week meetings and briefing journalists. Protests go on outside (including Clive Palmer protesting against the repeal of the road safety legislation his one remaining senator voted for yesterday).

Given the only two pieces of legislation the government had on hand for recalling Parliament were dealt with yesterday, the government has no agenda for the day for the House of Representatives outside of question time and a few member statements.

Malcolm Turnbull was the subject of ridicule for lifting his “continuity with change” slogan from Veep but the last sitting day before budget week is fast becoming the sitting day about nothing. 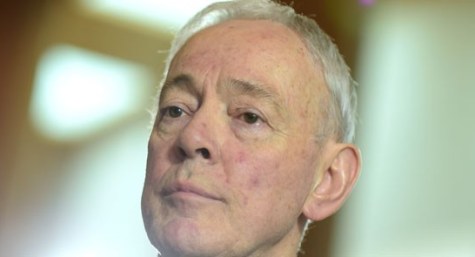 What if the crossbenchers call Turnbull’s ABCC bill bluff? 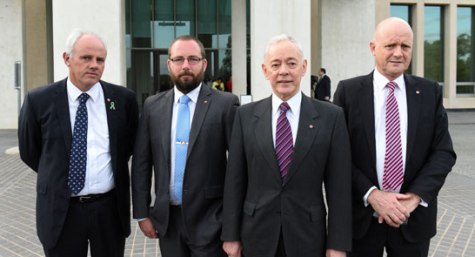 How do we get to a July 2 election? Five Senatorial plays

God help me, a website design change that is actually an improvement instead a make-work scheme for the design team.

I find the comments above hard to understand – this new site is a pain and still cannot be accessed directly – only via the comments in the daily email.
How does one find the daily edition without going back to the email?
Where is the list of the last week’s editions in the top right corner?
Why can’t tekky types leave good enough alone?
Do I have to click – Politics, then go back & click – Business, then…. etc?

Agree – “work for the droll” – idle hands are the tools of the idle.
(Why weren’t we warned, or informed yesterday about what was going on?)
“How to be different – join a pack.”
I had trouble every now and then with the “old” format – periods of having to sign in, every day (every comment sometimes) sometimes for a few days, then every couple – sometimes I had to sign in twenty times or so before I’d be recognised. I’m looking forward to how this is going to play up.
But no doubt we’ll get used to it.

klewi – I’d assumed that I was the only one (because of my ancient desktop & dodgy wifi) who sometimes had to try to log-in numerous times before being recognised, only to have to do so yet again to comment.
Three days into the new layout and the only good thing is that the lack of the “see following posts” option in the upper comments box means that we are spared our senile troll’s Inbox clogging drivel.
Which is most welcome.
Pity that we can no longer see the other, sane participants – without returning to the site, then the article, then the comment thread.

DuncanG – isn’t that the nature of tekky make-work?
Otherwise they’d have to go find something useful to do.

“it was clear the bill was going down not so much in flames, but as though the government had managed to pull off the plan in The Producers and set up legislation it knew would fail.”

Fair comment, and possibly going to lead to the same outcome as in The Producers, but come on, Mel Brooks and Gene Wilder were much smarter people than the numpties currently occupying parliament.

Honestly, the week that was. Was it Hunter S. Thompson who said “When the going gets weird, the weird turn pro.” Sums up this week nicely.