The hand that shakes the patriarchy? There was much to-do on social media this morning after Governor-General Peter Cosgrove’s departure from the Senate following his brief speech summoning MPs and senators to the special sitting to consider the ABCC bill. Cosgrove shook the Prime Minister’s hand, shook Deputy PM Barnaby Joyce’s hand, shook Speaker Tony Smith’s hand, then went around the centre table to shake Opposition Leader Bill Shorten’s hand … but walked away from Deputy Opposition Leader Tanya Plibersek’s outstretched hand.

Bad manners? Sexism? A lack of chivalry from a knight? Well, it’s complicated. Crikey understands that the protocol is for the GG to shake the hands of the PM, the leader of the opposition and the speaker only. But as he walked toward Barnaby Joyce, Joyce thrust out his hand, so Cosgrove shook it on his way past before proceeding to Smith. And if you look at the footage (say, here) it’s not clear Cosgrove sees Plibersek’s extended hand before turning and walking out. Inevitably, Cosgrove copped a caning for it on Twitter, but we’re loath to engage in a vice-regal slam. It’s been reported Cosgrove has called Plibersek to apologise, and that he did not see her outstretched hand. We’ll let readers make up their own minds if it was a GG gender gaffe or just poor timing.

Police wrongly announce man’s death. The Victorian Police media team has a lot of explaining to do this morning after announcing a teenager had died, when he was still alive. Nineteen-year-old Patrick Cronin is in a critical condition on life support, after a one-punch attack following a football match in Diamond Creek. This morning Police Media announced he had died, with multiple news agencies reporting he passed away on Sunday night. Less than two hours after the release, which is now deleted from Victoria Police’s website, Police released another statement, saying:

“Homicide Squad detectives have been advised the 19-year-old man who was assaulted in Diamond Creek on Saturday remains on life support at hospital.

“Investigators have spoken to the family this morning regarding the previous media release.”

The police have not explained how they came to incorrectly announce the death of the teenager. Cronin’s family have since released a statement saying that the teenager had passed away after his life support had been turned off.

Shopping, cricket and news for advisers. What is the most visited website in the office of Immigration Minister Peter Dutton? The Sydney Morning Herald, followed by Facebook and online shopping site The Iconic, according to Senate documents. Labor Senator Joe Ludwig has asked every department in the last round of Senate estimates to “provide a breakdown of the domain usage for the 50 most utilised (by data sent and received), unique (internet) domains accessed by the minister’s office”.

The SMH had the top number of page views in Dutton’s office, with other news websites, including the Brisbane Times, The Australian and News.com.au also appearing in the top 50. Carsales, Domain and Qantas also have more than 1000 page views each. The database that contains the private contact details of federal cabinet ministers and the party’s talking points, called Jeparit Town (after the birthplace of Sir Robert Menzies), is also included in the top 50 domains accessed by Dutton’s office.

The Environment Department has also revealed the websites most visited in Greg Hunt’s office, with the SMH again appearing at the top. Foxsports, Mamamia and Shopify.com are in the top 50 alongside the websites for the Department of the Prime Minister and Cabinet, Finance and Parliament House.

Puppies’ day in court. Actor Johnny Depp and his wife Amber Heard are back on the Gold Coast today, with Heard pleading guilty to illegally importing their dogs Pistol and Boo. The early plea means Depp, who was set to be a witness, will not be taking the stand. Heard is yet to be sentenced and Barnaby Joyce has not yet commented. Pistol and Boo didn’t make the trip to Australia this time, legally or otherwise, meaning they are safe from the Nationals leader for now.

Boaty McBoatface wins, but won’t sail. The competition to name Britain’s new polar research ship has ended, with Boaty McBoatface the clear winner above all other suggestions. But it’s unlikely the 200 million pound vessel will actually bear the glorious name Boaty McBoatface; due to the competition’s terms and conditions, the British government was never locked into whatever the public decided. According to The Telegraph:

“Jo Johnson, the science minister, signalled that ministers were unlikely to endorse the result. He told the Daily Telegraph: ‘You won’t be surprised to know that we want something that fits the mission and captures the spirit of scientific endeavour. I am grateful to everyone who has participated in the competition.’

“He added: ‘The public has come up with some fantastic and very imaginative suggestions [for the name]. We are reviewing all of them. We will come to a decision in due course.'”

iiNet mum on marriage equality after TPG buyout. Last week Telstra faced backlash after it was revealed the previously staunch advocate for marriage equality would not be campaigning on the issue in the lead-up to the plebiscite. Telstra now appears to have company in the form of iiNet.

iiNet was one of the signatories to the Australians For Marriage Equality ad that got the Archdiocese of Sydney so upset last year, but, since then, the company was bought out by TPG. TPG is not a company known for its advocacy of, well, anything in general, and, unsurprisingly, isn’t advocating on this issue.

When Crikey asked whether iiNet had received a letter complaining about the ad, or whether TPG had changed iiNet’s position since the takeover, a spokesperson said TPG hasn’t “taken any other step in relation to that letter”. When we asked whether this meant TPG did not have a stance on same-sex marriage, we didn’t get a response.

Trudeau talks tech. Canadian Prime Minister Justin Trudeau took the opportunity at a press conference this weekend to show off just how much he knows about quantum computing. It’s like Malsplaining, but better … 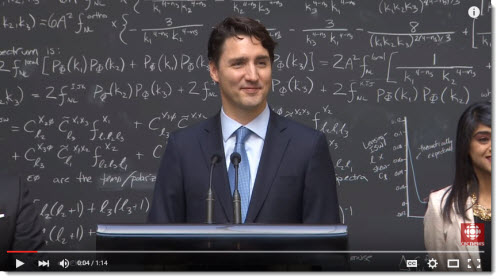 What’s in those secret government documents?