Media briefs: tears but no facts from Nine … exclusive watch … Bronny for PM …

Lots of emotion, not a lot of facts coming from Channel Nine. Plus other media tidbits of the day.

Nine facts thin on the ground. The Nine Network sent the glimmer twins, Karl Stefanovic and Tracy Grimshaw, out to defend 60 Minutes and its Beirut adventure. Stefanovic issued a statement yesterday through Nine. Grimshaw wrote an article for The Australia’s Media section this morning. Both were long on emotion and short on facts and explanations. Seeing as former News Corp spin doctor Greg Baxter is now advising Nine on crisis management, Grimshaw’s appearance in the Oz isn’t hard to understand. Stefanovic’s seems more heartfelt, but it is nothing more than a highly emotive defence of a difficult situation.

Neither included a full and frank laying out of the facts from Nine about how the 60 Minutes story evolved, who raised it, who drove it, how much money was involved, who paid whom, who hired and talked to the recovery group, and was there any assessment of the risks involved in the story made? What was the thinking behind the statement (behind the obvious answer: ratings)? Who gave the go-ahead for the attempted abduction of the children? Was Nine management involved in the story?

Nine had better start saying something official soon, or the Australian Communications and Media Authority might get interested. In fact, I hear that it has started assembling information on the story so that it has the background ahead of any official statement from Nine. Nothing official, but TV industry sources say the regulator’s interest remains low key while it waits to see the outcome of what happens in Beirut, and Nine’s reaction and explanation.

Despite the tears and hankies efforts of Stefanovic and Grimshaw this morning, Nine’s Hugh Marks will eventually have to make the most important statement of his corporate life, and in Nine’s most recent history, and it will have to be convincing and emotion free. — Glenn Dyer

Exclusive watch. Splashed with red ink on the front page of The Australian today is an “exclusive” story about a Christian who apparently had his Facebook post on the tone of the same-sex marriage debate (i.e. that marriage equality advocates aren’t nice enough to the homophobes, and gay people are never called bad words ever anymore) censored by Facebook, only to have it restored a few hours later, with an apology from Facebook. The problem is that the man involved, John Dickson, was not censored from letting people know his views on other social media platforms, and he kept updates on the apparent censorship via Twitter, well before The Australian‘s story. — Josh Taylor

Foxtel deal. Foxtel will remain a 50%-owned News Corp associate and Fox Sports will remain a 100%-owned subsidiary of the Murdoch clan’s second-string media company for at least another year because untangling the various links and financial relationships between News, Foxtel and its other 50% owner, Telstra, will take that long (and more) to sort out. News of the delay leaked via this morning’s edition of the Financial Review, a significant development given the fact that Monday is also Media section day in The Australian, when News Corp exclusives regularly appear.

The main links between News, Telstra and Foxtel are carriage agreements on Telstra’s HFC cable and its pricing, the supply of Foxtel programs to Telstra’s own in-house pay TV/streaming business, and the program supply agreement between Fox Sports and Foxtel (the core agreements for all of Foxtel) — which is, in effect, uncommercial because it has never been tested by an independent tender process. Telstra wants Fox Sports folded into Foxtel before the float, a move that could change the economics of the entire company but would deprive News of hundreds of millions of dollars of revenues and tens of millions of dollars of profits at a time when both are desperately needed to offset the slide in the print business (especially News Corp Australia and News UK).

There are a lot of entwined deals that will have to be unravelled and put at arm’s length. A multimillion-dollar loan will have to be either paid out or restructured, with a lower interest rate. Given these complexities, it’s no wonder the float is now set down for 2017. But who knows what markets will be like next year? It is doubtful, given the increased volatility so far in 2016 and the belief this will continue for much of the remainder of the year, the Foxtel float would have happened anyway. — Glenn Dyer

Front page of the day. No, as it turns out … 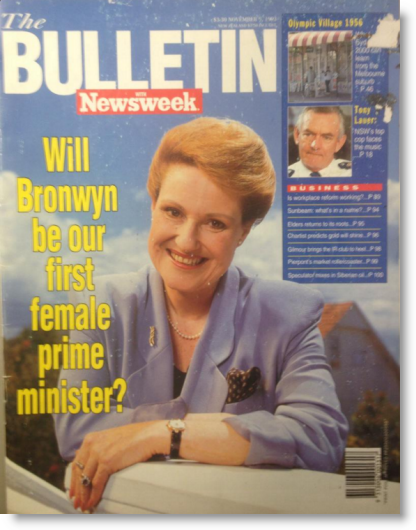