When the National Program for Excellence in the Arts -- now Catalyst -- was announced, many feared it would become nothing more than pork barrelling for favoured projects. They were right.

Buried down the bottom of that press release was a logo for the Australian government’s “Catalyst Australian Arts and Culture Fund”.

For close observers of the Australian cultural scene, this was a fascinating tidbit. The funding results of the highly controversial Catalyst fund have been keenly anticipated — and rather slow in coming. Despite huge interest from a cash-strapped cultural sector, only a handful of Catalyst grants have been announced so far.

So the Kaldor Public Art Projects media release signalled news of another Catalyst grant from the government. At least — it appeared to.

When Crikey inquired how much federal arts funding the project had received from Catalyst, Kaldor Public Art Projects wouldn’t say. A publicist for the project told Crikey: “I’ve checked with John Kaldor, and unfortunately he’s not able to comment on the funding at this point.”

Crikey asked Arts Minister Mitch Fifield’s office how much funding had been given to Kaldor Public Art Projects. At the time of writing, no response has been received. No government media release or ministerial announcement was forthcoming. No dollar figure of grant funding has been announced.

And yet, Catalyst announcements are being made. Last week, Fifield was in Western Australia. And, lo and behold, a number of funding announcements for successful Catalyst projects in the west suddenly rolled out.

On Wednesday, Fifield held a media conference in the blue-ribbon Perth suburb of Claremont, to announce a grant of $400,000 to arts organisation FORM to fund the transformation of an old goods shed into a new cultural space. Liberal Senator Dean Smith was there for the media appearance. 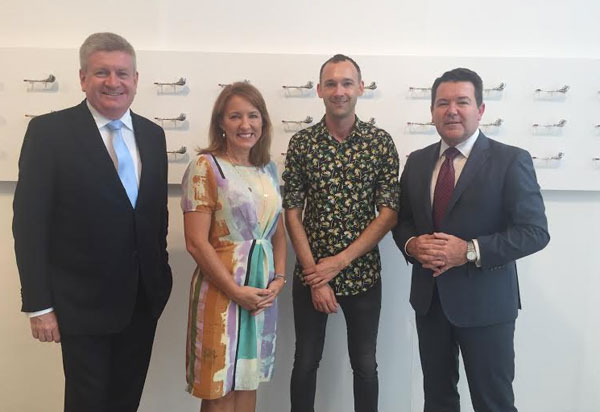 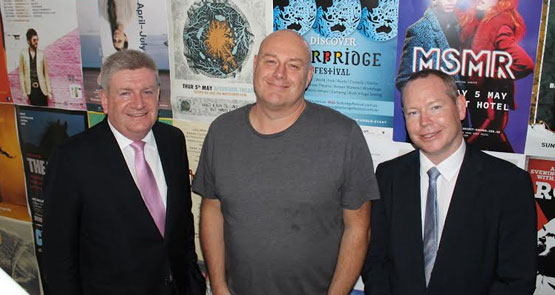 All in all, you could be forgiven for thinking that there was a federal election coming up.

Ministers getting their photos taken while handing out cheques are nearly as old as politics itself. But the devolution of Catalyst, into what appears to be little more than pork barreling in an election year, has deeply unsettled the Australian arts sector.

“We all want to be excited about the projects Catalyst is funding,” Anatolitis told us, “but it’s difficult knowing what’s at stake once the Australia Council announcements are made, and we find out which of our finest companies will be jeopardised as a result.”

Sarah Moynihan and Norm Horton of Brisbane-based arts organisation Feral Arts agree. “Given all the talk that Catalyst would operate as an LNP slush fund it seems extraordinary that the minister would add fuel to that fire by adopting such an overtly political way of announcing the successful grantees,” they wrote in an email. “It just looks like Catalyst results are being used as part the election campaign.”

In last year’s Senate inquiry into arts funding, many in the industry warned that, with few of the normal checks and balances of an arm’s-length funding body like the Australia Council, Catalyst risked becoming a ministerial slush fund to dispense funding to favoured projects and electorates. Another criticism was that Catalyst would end up duplicating existing funding programs, with less transparency and poorer outcomes.

So far, that’s exactly what seems to have happened.

The normal process of arts funding has grant programs judged by a panel of peers and then announced in one go, as a “round” or a “tranche”. Catalyst is supposedly run on different lines: applications are always open and are apparently judged on a just-in-time basis. A spokesperson for Fifield told Crikey that the bite-sized rollout of Catalyst announcements was due to the “rolling” nature of the program.

But this doesn’t explain why the minister had a group of specifically Western Australian grants to hand out, conveniently ready for his trip through Perth electorates.

Similarly, the grant to Kaldor Public Art Projects (and we still don’t know the actual dollar amount) appears to be an obvious example of double-dipping. The Royal Botanic Gardens project has already received federal funding through the Australia Council in January this year. The irony of one of the richest philanthropic foundations in the land receiving two grants from the federal government for the same project will not be lost on struggling smaller arts companies, which are at grave risk of missing out altogether.

The problem for the vulnerable small-to-medium sector is that Catalyst funds have been taken directly from the Australia Council — throwing the arm’s-length funding body into chaos, and resulting in the postponement of crucial multi-year funding rounds for small companies.

With the Australia Council’s four-year organisational funding round set to be announced in coming weeks, the entire industry is on tenterhooks, with many organisations set to lose their ongoing funding. That could cause many to fold.

Given this, the outcomes of the Catalyst applications are crucial. But we know precious little about where the money is going. Fifield appears to be announcing successful Catalyst applications one by one in marginal electorates, in an effort to gain as much publicity as he can in an election year.

Anatolitis argues that “many small-to-medium organisations have had to submit applications to Catalyst, because the cuts that led to its creation have put huge pressure on every other source of funding”. And yet, so far, most of the funding announced by Catalyst has been to large foundations and commercial galleries. “Nobody wants to keep hearing about ill-considered cuts, unexplained decisions and late announcements,” Anatolitis told us. “Why disrupt a multi-billion-dollar sector like that?”

Both Labor and the Greens are highly critical of the program. Opposition arts spokesman Mark Dreyfus told Crikey: “Catalyst has always been nothing more than a ministerial slush fund, created from money that was ripped away from the Australia Council.”

“From the beginning, Labor has had concerns about the lack of transparency in how Catalyst operates,” Dreyfus said. “As yet there appears to be little consistency across the grants that have been given, and little effort made to explain the rationale or criteria that connects them.”

The Greens’ Adam Bandt echoed these comments. “This close to an election, the government shouldn’t be drip-feeding funding announcements with the media cycle in mind,” Bandt wrote in an email.

“The Minister should immediately announce all successful grant recipients so that people know how this contentious fund is being spent, especially given we’re already in unofficial campaign mode.”

Crikey approached Fifield’s office for comment about the timing of Catalyst funding announcements, but no response was received.

This is my memory of listening whilst driving to a part of the Book and Arts show on ABC RN a couple of days ago:
Apparently Catalyst has given an unusually large grant to a body to refurbish Hans Heysen’s house in the Adelaide hills. Its unusual because of the large sum involved, that money for such is available from more relevant sources [heritage for example] and, most significantly, it was as a result of lobbying by Cory Bernardi [Lib Senator SA] and Jamie Briggs [Lib MP SA].