Prime ministerial guns ... Labor practising their electioneering ... stop with the continuity and change ...

Colsi surprise. The member for Warringah is known for his interesting style choices (Speedos, up-turned collars), but he shocked punters this week with his daring move into the world of fashion with the “Colsi” making an appearance as he sung karaoke during the pollie pedal last week. A Colsi is a blue singlet with a white shirt collar. No one had seen much of the Colsi around before Tony Abbott was seen wearing one, and no one was more shocked at the former PM’s attire than the creator of the apparel.

Stephen Tully, the man behind the Colsi, told Crikey this week that the first time he knew Abbott had donned his “genius invention” was when he saw the story in the media earlier this week. He said it was a nice surprise, considering he didn’t think that many customers had worn it, yet:

“A happy customer had ordered a couple of Colsis like many are currently doing. Colsi had received an email back from this customer (which turned out to be [radio announcer] Wesley Heather) asking if one us could call him.

“I personally called Wes and during this call her he mentioned that he was entertaining Tony Abbott that night and was going to present him with the colsi.  At this point, I’m laughing! I’m saying things like ‘Mate … if you can do that, I need to see photos … I need proof!’  ‘I’ll certainly replace the colsi and get you more!’

“Because, I’m thinking to myself … ‘surely this isn’t going to happen’

“Come later that night, the colsi Facebook page gets a little red notification pop up.  It’s photos of Tony Abbott donning the colsi! And donning it well! ‘He’s done it!  Wes has bloody done it!!’ were my first words.  This has blown my mind … and I’m thinking ‘This is gonna be huge …'”

While it has led to a spike in traffic, Tully says he can’t throw in the day job just yet.

Practise that winning feeling. A tipster tells us that the head honchos of the federal Labor Party are in Melbourne this weekend for “election training”. Maybe they are being taught the correct way to kiss babies, to avoid misdirected lips landing on adult women?

An expensive journey. The $6.1 million government-funded film Journey, which is designed to deter asylum seekers from coming to Australia by boat, has begun being broadcast in Iran, Iraq, Pakistan and Afghanistan this year. In response to a question on notice from Senate estimates, the Department of Immigration and Border Protection said that the film would be repeated a number of times in the countries until July. This is how the department describes the film:

“The telemovie Journey is a ninety-minute film that is inspired by true events. It portrays the journeys of people looking to travel illegally by boat to Australia. It highlights their personal situations and challenges they face along their journey. It includes the messages delivered as part of the Australian Government’s No Way anti-people smuggling communication campaign. This includes the risks and dangers of travelling illegally by boat, the lies of people smugglers, and Australia’s protection measures to preserve the integrity of its borders, including boat turnbacks.”

After a bit of searching online, we’ve found the full version of the film (but not in English). Watch at your own peril. It’s not the feel-good family fun film of the year. 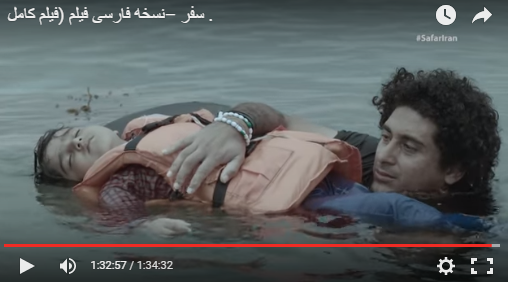 Don’t mention … my actual business. Twitter founder Jack Dorsey is in Australia to launch his new project — micro-payment technology system Square. Just don’t mention the T-word. Ms Tips hears that Dorsey has a very long list of no-go zones for members of the media that are covering his visit. We hear that his requirements are stringent, with no mention of Twitter, his role as joint CEO of both Twitter and Square, Square’s employment numbers or its profitability. While Dorsey is reportedly worth more than $1 billion, he’s not necessarily a darling of Silicon Valley, with reports of him being difficult to work with and unable to credit others for their work being prominent criticisms. Dorsey has said Twitter needs to be more transparent and open with its users, but this list of no-go zones doesn’t seem very transparent — or innovative — to us.

Calling the Vatican. Yesterday we reported on the Archdiocese of Sydney pushing Telstra not to campaign for same-sex marriage in the lead-up to the election/plebiscite. Crikey asked the Archdiocese of Sydney if the Church had investigated telcos that would back its archaic view of marriage. We were told it hadn’t “looked into it”. Based on our reading, the Church will have very few options, with Telstra, Optus, Vodafone, M2, and iiNet all signing onto the Australians For Marriage Equality open letter.

Look of love. Senator Sam Dastyari is feeling on the outer in this bromance between Senator Kim Carr and Labor leader Bill Shorten: 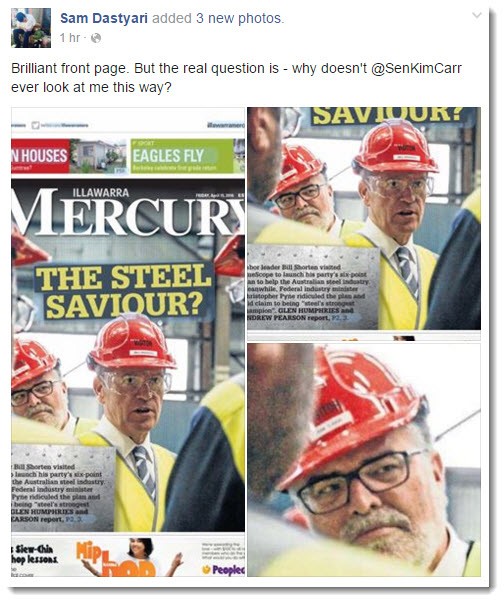 Continuity and Change. Veep actress Julia Louis-Dreyfus was asked by the New York Times what she thought of real-life politicians using her slogans, including our own Prime Minister Malcolm Turnbull’s “continuity and change”. She had this to say:

“Unwittingly. We were ‘Continuity With Change,’ he was ‘Continuity and Change.’ We tried to come up with the most banal, vacuous, meaningless piece of [garbage] slogan. He used ‘and,’ so maybe that somehow makes it more palatable.”

On the run. While many Australian marathon runners travel around the world to push their bodies to the limit pounding the pavement of unusual cities, Pyongyang isn’t up there with New York or Boston in the marathoning stakes. According to Chinese tour company Koryo tours, almost 600 foreign runners took part, and the winner of the marathon was 40-year-old Australian Tom Dover, in his 15th marathon. Koryo Tours quotes Dover saying:

“‘It was amazing. DPRK was unexpectedly beautiful,’ he told us, after the race, ‘and I rank the Pyongyang Marathon up there with New York, Boston and Tokyo — with the edge being able to start and finish in the May Day Stadium, in front of tens of thousands of people, which was mind-blowing.'”

Texting detector. Cellebrite, the Israeli tech company that has been linked to the FBI’s bid to crack an encrypted iPhone, now claims to be able to test if a mobile phone was being used by a driver at the time of a road accident:

“Under the first-of-its-kind legislation proposed in New York, drivers involved in accidents would have to submit their phone to roadside testing from a textalyzer to determine whether the driver was using a mobile phone ahead of a crash. In a bid to get around the Fourth Amendment right to privacy, the textalyzer allegedly would keep conversations, contacts, numbers, photos, and application data private. It will solely say whether the phone was in use prior to a motor-vehicle mishap. Further analysis, which might require a warrant, could be necessary to determine whether such usage was via hands-free dashboard technology and to confirm the original finding.”

Trapped in Xinjiang: inside the fight to reunite a family