The day the music aged

The line-up for the UK’s Glastonbury music festival came out just the other day. I’m not going to attend (it’s a teensy bit far away), but I checked it out regardless.

What I saw was pretty amazing: a giant line-up of great bands who could easily have played at Glastonbury 1980.

The age profile of the acts on the poster was similar to the age profile at my local Scrabble club. Art Garfunkel, for example? He began his career in the ’50s. ZZ Top is among the headline acts too. The band began in the 1960s. The 1970s are well-represented with Madness and Earth, Wind and Fire.

It’s not all peppermint tea and hypertension medication backstage, though. Some up and comers are on the roster: Chvrches, Ezra Furman, James Blake, Jake Bugg for example. They’ve been going just a handful of years.

Still, the average age of bands on the poster was 17 years. The average date they were formed was 1999.

I then did something that made me worried. I found the poster for the Woodstock festival and repeated the process and found a massive contrast: the average founding date for acts playing at the 1969 festival was 1964. The bands were, on average, just five years old.

Woodstock is kind of the platonic form for music festivals: wild and loose, famous and influential. It is a big reason multi-day camping festivals continue to have cultural credibility despite their challenges. So why the huge difference in types of act?

Obviously, Woodstock and Glastonbury are different types of festival. So I compared Glastonbury 2016 to some earlier incarnations. They slotted in neatly in such a way that I’m pretty sure this is a trend. 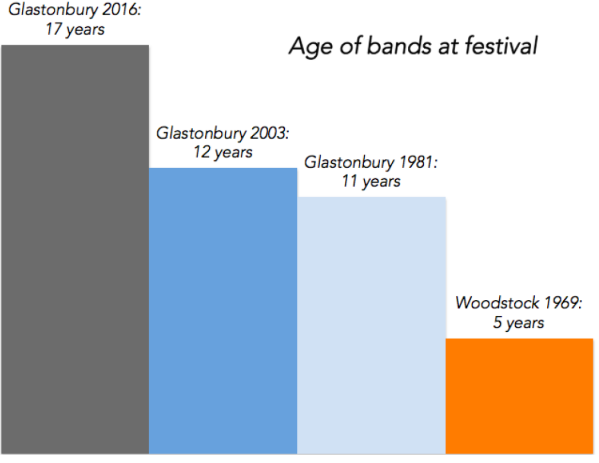 The line-up for Australia’s Splendour in the Grass Festival came out this week too. While it features up and comers like Courtney Barnett and Sampa the Great, the top two acts on the poster are The Cure, formed 1978 and the Strokes, formed 1998.

What does this mean? What does it say about the vitality of music and the future of the music industry?

Young bands are, more and more, small. I see a lot of two-pieces — in the Macklemore and Ryan Lewis style. One MacBook and one microphone. Many of them are pop and rap acts, rather than traditional “rock”.

It makes sense that when times are tough, the bands that survive and endure are ones with low set-up costs and low risks that everyone will skip band practice. Of course, that can make it hard to put on a killer live act. It really depends on having a vocalist who is a showman as well as a singer.

All this is cramping the supply of young bands that could fit onto a festival line-up.

The fragmentation of the music industry means very few bands win mass appeal. The bands that do have mass appeal are older.

Leaked data from the cancelled Soundwave festival showed the Smashing Pumpkins were being paid $1.27 million to play just four dates.

The fate of that festival shows the problem. Festivals are hugely risky; they need to guarantee ticket sales or go broke. So they want to book an act that is a sure-fire hit. But those acts cost a fortune. So the opportunity to take risks shrinks even further.

A ticket to the original Woodstock cost US$18, or about two days on the US minimum wage. Glastonbury costs 228 pounds, or $427. That’s eight days at the UK adult minimum wage.

While the 20-year-olds of 1969 were likely to have jobs, the same people today are still at university. Unemployment is higher among those under 25. There is just not the capacity to pay for a big music festival among the youth.

Big music festivals are doing everything they can to get oldies in.

I went to a festival earlier this year (Sugar Mountain) that offered an “immersive dining experiment” for those disinclined to buy hot chips and eat them on the lawn.

Most festivals also have special VIP areas with seats and shade, a concierge, a bar and great views of the stage. Obviously, this sort of development has caused a lot of consternation and spilled ink in the pages of Rolling Stone.

So does the big three-day festival of music and camping have a future? It is far from certain. As more mega stars of music follow Bowie into the great beyond, the music industry will continue to be more and more splintered and the future will likely be in smaller gigs.

If you want to experience the madness of a big festival, the time to do so is soon.

It’s not surprising that Woodstock would have a lot of “younger” bands in it because music festivals and globally popular acts were still in their infancy. So many acts in modern times are disposable and it’s hard to see where the next “super group” will come from. Just look at the average ages of all the stadium fillers now.

” One MacBook and one microphone. Many of them are pop and rap acts, rather than traditional “rock”.”

Yep, and that’s how the industry prefers to keep it. With this format it’s easier for the music “change agents” aka recording industry to manipulate, coerce and corrupt music direction. The more complex and bigger format rock bands are less likely to fall for the industry marketing dribble. It’s hard to get a recording contract these days unless the lyrics of your songs worship the devil or some other secular icon.

Woodstock was half a million dumb kids sitting in the mud, waiting to be fed, watered & entertained by grown-ups despite being envisaged as a participatory event, an Arts, Craft & Skills Happening at which people were supposed to … err participate.
It was the death of the hippie ideal, not the epitome as often claimed by the breadheads who grew like cancers from the remnants.
Similarly Glastonbury, compare what was the original ideal and aim and look at the megabiz now.
The only similarity is the eternal mud.

Burt Bacharach was one of the headliners for 2015 so that sort of act always skews the figures somewhat. However, in amongst the usual suspects such as Florence and the Machine were Aussie acts like Chet faker and Courtney Barnett, who arn’t really that old.

I think your demand side argument is the really scary one. I had my first part time job at 14. I got paid adult wage and was expected to perform as an “adult” in the real world. Now we keep everyone at schools and Unis with ever declining standards and expect them to study bogus VET courses such as “Certificate II in Till Management”. If they can get a job to help buy a festival ticket, we pay them slave (junior) wages and complain about lack of motivation.
Not sure what will happen now we are going down the American path of “intern”, or as I like to think, unpaid slave.