Sales of the Post crashed sharply under Allan, but Rupert Murdoch was all praise for the iconic Aussie editor.

Legendary Rupert Murdoch editor Col Allan is stepping down from the New York Post, News Corp announced in New York this morning. Allan used to edit The Daily Telegraph — he left Sydney to run the Post in 2001.

Crikey’s very first edition featured a staggering profile by our founder Stephen Mayne on his experiences with Allan, called “Pissing in the sink”. The cryptic reference was to Allan’s tendency to get up and piss in the sink at editorial meetings — once he nearly splashed Lachlan Murdoch. The anecdote got a round of coverage recently after the Post spent three days covering the personal hygiene habits of a homeless man on the front page.

There’s been speculation about Allan’s imminent departure from the Post for several years. The Financial Review recently reported on rumours that Allan had been approached to work for Donald Trump. Allan was dismissive: “It’s simply not true.” Sunday New York Post editor Stephen Lynch is replacing Allan. No word yet on where the long-serving editor will go next.

Murdoch was effusive this morning over his “longest-serving editor”, calling Allan “one of the most outstanding editors of his generation”:

“He has been a great friend and colleague since he joined in 1974 and I want to thank him on behalf of my family and the company for his service.”

Sales of the Post fell sharply under Allan. He took charge in 2001; September 11 happened and boosted sales by 75,000 in the six months to March 2002 (as it did for other US newspapers, including hated rivals The Daily News and The New York Times). The Post’s circulation peaked at 563,000. The latest reliable figures for newspaper sales was at March 2013 when they were reported by the Alliance for Audited Media at just over 249,000. Digital subscriptions and digital subscriptions boosted that to just over 350,000,a fall of a nasty 18% on the figure at the end of March 2012 of just over 432,000. Once again Murdoch has shown immense loyalty to an editor who was a failure in the most basic of tasks: to sell more papers, or at best protect existing sales.

Here’s how one rival saw off Allan … 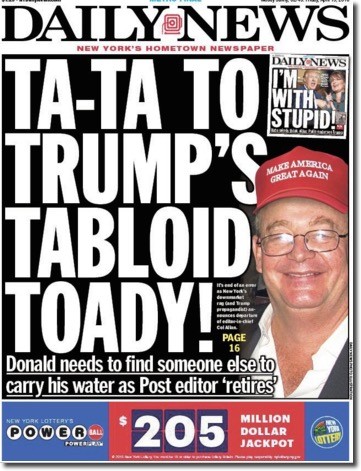 Mayne: what next for Col Allan — a job with Donald Trump?