In a sea of verbal phlegm, yesterday’s speech by Freelancer’s CEO at Sydney’s innovation summit was short and to the point. The Australian economy was in the Stone Age, he said. The three largest companies in the world, by market capitalisation, are Apple, Alphabet (Google) and Microsoft. These companies, together with Facebook (six) and Amazon (nine) generate more than half a trillion dollars in revenue every year, which is 70% of Australia’s gross national income, he said. By contrast, the top 10 Australian companies consist of two miners, four banks, Telstra, a supermarket company and a superannuation company.

While the world is in the grip of a technology gold rush, Australia is “completely missing out”, Barrie said. The number of students studying IT in Australia has dropped by at least 40% in the past decade, as have enrolments in the STEM subjects. Women, who used to make up 24% of technology students, now make up 10%.

Although mining this gold rush required more people, he said, his company could no longer hire people to come and work in Australia because it’s considered a backwater. Part of that is the implementation of the lockout laws by New South Wales Premier Mike Baird, an issue on which Barrie has been extremely vocal. This is being driven by the pursuit of gambling revenue, which totalled $2.1 billion last year in the NSW state budget, he said:

“The NSW government is so addicted to gambling revenue that it has shut down most of Sydney’s nightlife in order to boost this line item by funneling people into the casino or pokies rooms … It’s a bit hard to build a technology industry when every second 20-year-old wants to leave because you’ve turned the place into a bumpkin country town.”

San Francisco had supplanted Silicon Valley as a technology hub because young people wanted to live in the city, not out in the suburbs, he said.

Barrie was the best speaker at the summit, which was convened to discuss Malcolm Turnbull’s “agile and innovative” announcement last December, back when the voters were still full of hope. The full name of the talkfest was the Knowledge Nation 2016 Summit (sub-titled “Let’s Be Nimble, Let’s be Quick”). It was designed to “drive the implementation of the National Innovation and Science Agenda”. 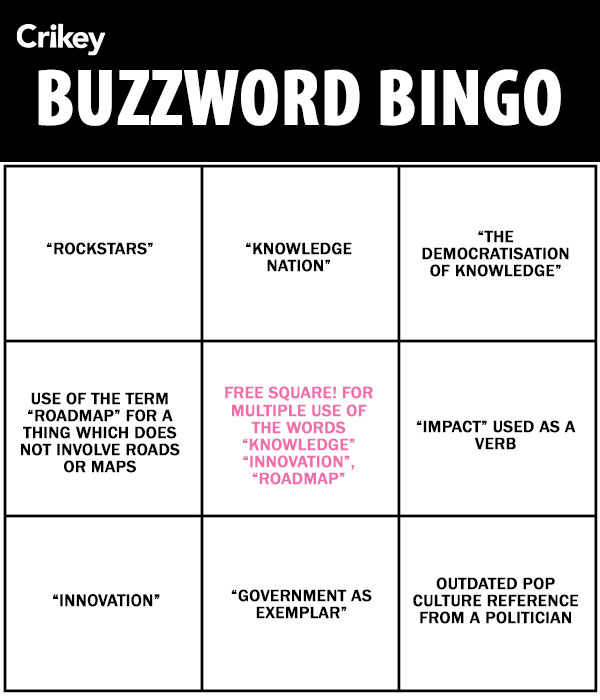 The problem, of course, is that “innovation” is like sex: no one wants to hear a middle-aged person enthuse about it, especially a politician. And once you put it in someone’s job title — Christopher Pyne is the Minister for Industry, Innovation and Science — then it’s lost all meaning.

I sat through Pyne’s speech, which strayed dangerously into David Brent territory: “Knowledge creators … impact and end-user engagement of university research … 10-year road map (i.e. two elections away) … the democratisation of knowledge, research infrastructure road map … knowledge nation … government as an exemplar …” It went on and on. At least we didn’t have last month’s “continuity and change” after it was revealed to be a joke. And “Ideas Boom” didn’t rate a mention, probably because it has been mauled on Twitter.

Education Minister Simon Birmingham’s speech wasn’t as bad, but his presence was particularly galling — how on Earth are we going to “drive innovation” when his department continues to gut universities and the TAFE sector? And if they want to create “knowledge rockstars”, why don’t they just fully fund the Gonski reforms? I don’t really believe Pyne, who looks like he spends his evenings reading P.G. Wodehouse, will innovate anything other than a submarine factory.

The other sponsors were Telstra (lucky there wasn’t another outage) and a large number of consultants. I can’t even say “PwC Innovation and Disruption section” with a straight face; does anyone really think Uber was created by an accountant? And what was Rio Tinto doing there?

For those of us who lived through the tech boom (and subsequent tech wreck) of the late 1990s, and the Hillsong-like Ruddbot-led Australia 2020 Summit, it all had a terrible Groundhog Day feel about it.

And anyway, innovation is already passe. In 2006, The Economist published an article describing the way that Chinese officials had made innovation into a “national buzzword”, despite the fact that these types of phrases, uttered by the government, “mostly end up fizzling out in puddles of rhetoric”. By 2012, The Wall Street Journal had noted that “more than 250 books with ‘innovation’ in the title [had been] published in the last three months”. In the article, a professional innovation consultant was quoted, advising his clients that it was just a “word to hide the lack of substance”.

In a recent article in Aeon magazine, academics Lee Vinsel and Andrew Russell pointed out that innovation-speak “worships at the altar of change, but it rarely asks who benefits, to what end?”. We, as a society, need to ask questions about what we really want out of technologies, they write:

“What kind of society do we want to live in? Will this help get us there? We must shift from means, including the technologies that underpin our everyday actions, to ends, including the many kinds of social beneficence and improvement that technology can offer.”

There wasn’t much of this happening at Knowledge Nation. Instead, we had Pyne telling us about one of his favourite bands, ABBA. Due to its unique sound, the band had been seen to be very innovative in the ‘70s, he said. “And we are counting on Australia to give the world the next ABBA.”

Big Bash cricket is the most innovative, agile and Turnbullian start-up in Australia

Lulz. Such a top shelf rant Margot. Bravo!
We all owe you a huge debt of gratitude for enduring that nonsense. Such a relief we Crikey subscribers weren’t forced to play the dreaded buzzword bingo.

Maybe Pyne mistook it for a comedy festival? He seems like he’s always having such fun being on TV and radio.

ABBA? Seriously? ABBA? That’s the best he can do? I’m mortified.

It’s also worth noting that tech doesn’t always produce that many jobs. A small town in the US was very excited to have Google open a vast data centre nearby. Then they found out it employed only 65 people in a building the size of a football field.

All these buzzwords stink because Pointy Haired Bosses have been using them for decades now, people know what they mean.

Here’s an example: ‘rockstar’. No one should ever aspire to be a ‘rockstar’ in a workplace. ‘Rockstar’ is code for overworked salaried worker. If you get asked by a prospective employer to be their ‘rockstar’, run like hell.

I’ve been saying this in the comments here since last September but Agile means no plan.

At least no one is talking about “Empowerment”. We should be thankful for small mercies.