Work for Fairfax — for free!

When should an internship become a paid position?

Despite a social media backlash and the apparent deletion of a post advertising a new round of seven-week internships at The Sydney Morning Herald and the Financial Review, Fairfax’s unpaid internships are going ahead, SMH editor Judith Whelan told Crikey this morning.

When the highly sought-after internships were announced yesterday morning on Facebook, young journalists and freelancers on social media opined that seven weeks was too long to expect young journalists to work for free. Some felt that Fairfax was exploiting entry-level journos by making them do nearly two months’ work for no pay. 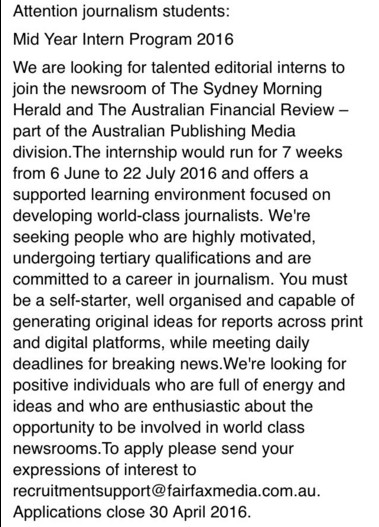 We had wondered if the deletion of the post (above) had meant Fairfax had reconsidered the scheme, but Whelan says that’s not the case. The internships, she says, “are in line with the programs we have run in the past few years, with selected universities who offer journalism degrees which require units of practical newsroom experience”. “The internships count as academic units towards the awarding of the degree.”

It’s worth noting almost no one in the Australian media pays interns. Crikey‘s internships generally last a week or two and are similarly unpaid.

Journalism academic Alex Wake, who runs RMIT’s journalism internship program, told Crikey few news organisation paid for interns, but the ones that have were Reuters and Melbourne broadcaster RSN 927AM, who each year fund a paid internship in memory of broadcaster Steve Cairns. A few months ago, BuzzFeed also offered a 12-week paid internship at its Sydney office, and Mashable is currently recruiting for a paid intern. Three of these companies are international news operations — the issue of unpaid internships is more controversial in the United States, where internships are traditionally far longer. Some young journalists have in recent years sued American publications, which had them doing entry-level work for extended periods for no pay.

“We’ve taken the attitude at RMIT that 15 days of unpaid work is enough to satisfy the requirement of our courses,” Wake said. “And we think our students are skilled enough that after that amount of time they should be paid for what they do. And we say that to employers, because we believe that’s in the spirit and intent of the Fair Work Commission.” Most students, she adds, take a financial hit to do an internship, having to time off from their paid work.

“I’ve said to many employers over the past few years that if they don’t pay for students, or ask them to volunteer beyond that time, they’re perpetuating a media that is basically rich white kids. It wipes out a lot of really talented young people from newsrooms and that’s my concern about it.”

Many organisations take the attitude that given their current paid journalists only got their positions through a long period of unpaid work themselves, young journos today should earn their stripes by doing the same, Wake says. But that attitude means “they get stuck with a particular type of young person, and not those with wider life experience”.

A lot of professions require aspiring workers to do unpaid internships, and many of those demand a much bigger time commitment than you would typically find for a journalism internship. Nurses and doctors, for example, do whole semesters of on-site, free work as part of their training. On the other hand, most other industries have a better capacity to offer interns a job at the end of the road than the media.

The Media, Entertainment and Arts Alliance has today launched new guidelines about internships in the media industry. On the issue of the length of internships, it states: “a vocational placement should last no longer than one semester”, though it says the hours of internships should not interfere with the ability to undertake paid work.

Correction: Crikey misquoted Wake to say only Reuters had recently paid its interns — Melbourne station RSN also does. The piece above has been corrected.

Perhaps it’s time you started crowd funding your internships Crikey.
I’d sort of assumed they were unpaid, but to hear it confirmed is depressing.

Cheaper than slavery – slaves had to be housed and fed.

Well Fairfax has done pretty well out of the whole Clive Palmer story – why not offer some places to sacked workers or their kids.