Abbott boosts party membership. Fred Nile’s Christian Democratic Party is bringing its candidates to Canberra next Monday, and they are talking up their chances at the next election. The press release also promises new blood in the party since Tony Abbott got shafted from the top job. Greg Bondar, CDP federal director, said:

“Since the ousting of Prime Minister Tony Abbott in September 2015 the CDP has had a steady influx of new membership applications from former Liberal party members — voters who are disillusioned with the disgraceful way that the former Prime Minister was treated, and now disenchanted by a party that is clearly moving away from its conservative roots. As a result of this obvious shift the party is venting many loyal supporters.

“On average, we’ve received 10-20 new memberships a month from disenchanted Liberal party members who have been very vocal in their mistrust of the current government and Prime Minister Malcolm Turnbull, and who have declared that they will not be voting Liberal again.”

Investing in the arts — international arts. New Arts Minister Mitch Fifield’s Catalyst program — basically a rebranded National Program for Excellence in the Arts, which stripped funding from the Australia Council — has announced its second grant. It has been met with a lukewarm reception:

“Federal Arts Minister Mitch Fifield has announced the second major grant under his Catalyst fund will go to Western Australia to support the establishment of a new international artist residency program.

“Local arts organisation FORM, which has been around since 1968, will use the $400,000 grant to establish The Goods Shed in the Perth suburb Claremont, which will provide facilities for international artists.”

While a $400,000 grant has gone to overseas artists, Daily Review reports local arts companies are preparing to shut up shop if they miss out on the next round of Australia Council grants.

Who said executives came cheap? Late last month, the ABC announced a big restructure of its TV division, intended, it said  to ensure a “platform-agnostic approach to reaching audiences”. Getting a big promotion is former head of strategy and digital products Rebecca Heap, who now has the catch-all title of “head of audience and digital”. It seems a somewhat similar role to that formerly held by head of content Adrian Swift, who returned to the Nine Network after 18 months at Aunty in January.

It’s hard to reconcile exactly what these restructures are aimed at, but we hear from our sparrows at the ABC that TV staffers are just as perplexed as those in radio (currently undergoing its own restructure). One point of contention is the cost: rumour is the ABC spent $750,000 on it and brought in LEK Consulting to advise. LEK are regulars at the ABC — they’ve looked at a possible merger of ABC and SBS, TV viewing levels, and plans for the ABC to try to boost viewing by 10% in recent years. But $750,000 for a change of titles and structure …? Seems a bit steep.

Dedicated follower of fashion. We never thought we’d write that Tony Abbott is a fashion icon — Lycra and blue ties just aren’t that original. But the video footage of the former PM singing karaoke in this creation really is something special … 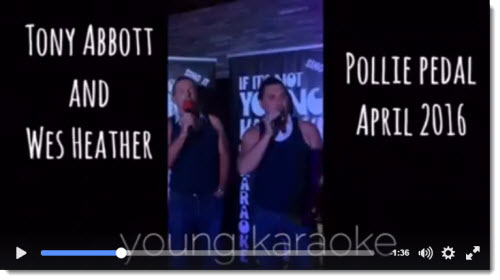 Abbott is wearing a “Colsi” — a singlet with a collar. It’s like the mullet of clothing; business and casual all at once. They’re available here.

Perks of the job. There’s many perks that come with being the leader of the free world, and United States President Barack Obama knows how to make the most of them. It was revealed at the series premiere this week that Obama has requested advance screenings of the new season of Game of Thrones, and of course that request has been approved. Presidents have a lot of secrets to keep, so we’re sure he won’t let it slip whether Jon Snow is alive or not.

Barnaby in Betoota Advocate. Today is a special day. Barnaby Joyce, the man who threatened to kill dogs belonging to the sexiest man alive (twice), is Acting Prime Minister. At least until Malcolm Turnbull gets back from China. Joyce has a lot on his plate, including trying to keep his seat under a strong challenge from former independent MP Tony Windsor. Both Joyce and Windsor gave wide-ranging interviews to Queensland satirical news outlet the Betoota Advocate, and this report was released this week … 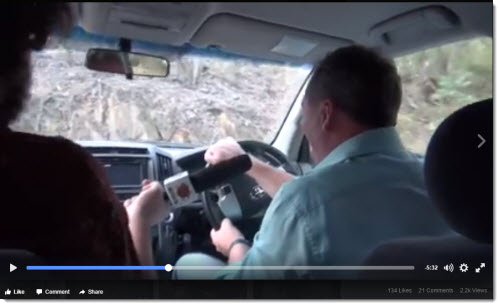 Joyce sat down for a few beers with editor Clancy Overell, and told him he stood by the Pistol and Boo fiasco:

“Johnny Depp’s been in contact with us. He’s coming back. Mr Depp and Ms Heard broke the law. People who break the law get into trouble and when they get in trouble you’ve got to have some serious words with them. Now I make no excuses for me biosecurity is a big issue and they stuffed up big time.”

He also vowed to stay humble as Deputy PM and hadn’t given up rum … but he’s drinking less of it.

Depp’s Dogs Fiasco my arse. Johnny Depp was melting down and Barnaby Joyce was as calm as a still lake.

Those Colsi’s are really something else.
Perhaps they’re specifically designed to get a bloke past the doorman of the Qantas Club lounge.
Personally, I think they rank slightly below a snuggie in the fashion stakes. But then what would I know, jeans, T-shirt & thongs constitutes “formal” in my book.

“Abbott supporters” must be an oxymoron?

How much is the reimbursement – of Toady’s out-of-pocket expenses for this pollie-pedal – costing us?

You would be forgiven for thinking that Abbott is the only person in Pollie Pedal, he’s probably the only one claiming expenses however.