Gina Rushton will be going to BuzzFeed. Plus other media tidbits of the day.

Rushton to BuzzFeed. Unlike the offspring of many dynasties at Holt Street, Chris Mitchell’s stepdaughter Gina Rushton appears to be no News Corp loyalist. She’s been lured away from The Australian by BuzzFeed to be its new breaking news reporter from May 10.

It’s a pretty important role at BuzzFeed, says Australian boss Simon Crerar. It was previously held by Mark Di Stefano, but it has been empty since he was promoted up to political editor. Rushton will follow everything that doesn’t fit into one of BuzzFeed’s defined rounds, but also, Crerar says, do her own investigations and break news.

“I feel we’ve done a pretty good job so far in the things we’ve focused on,” Crerar said. “But we want to go broader.” It’s hoped Rushton’s experience covering immigration, Islamic radicalism and refugees for The Australian will help BuzzFeed tap into these areas.

The hire is the first for former Crikey editor Marni Cordell, who said goodbye to the bunker last Friday and evidently hasn’t had much down time between roles.

“I’m excited to have Gina on the team,” Cordell, now BuzzFeed’s head of news, said. “She’s a focused, driven and ambitious journo, who wants to get the story first. I look forward to working with her and the rest of the team to break more big stories and get in front of the news cycle.”  — Myriam Robin

Fran Kelly the new Sarah Koenig. The ABC has a big fat hit on its hands, for a show that nobody has even heard. The Party Room — a new politiwonk podcast with Radio National hosts Fran Kelly and Patricia Karvelas — has already hit number nine on the iTunes charts in Australia, such is the thirst for a local answer to popular American political podcasts like Slate‘s Political Gabfest …

All listeners have to go on is a one-minute preview, complete with a strategic spruik from one Malcolm Turnbull (“There’s only one ABC election podcast I’ll be listening to this year …”). The first episode of the show proper will be released at 2pm today (Insiders host Barrie Cassidy is the guest), when downloads are sure to push it well ahead of Public Radio staple This American Life and ex-mega-hit Serial‘s dud second series. Only Kelly herself stands in the way of the No. 1 spot, with a podcast of stories from her RN Breakfast program.

Aunty is getting serious about on-demand audio, launching a dedicated production unit to make bingeable new work like kid-friendly ethics program Short and Curly and upcoming comedy shows. The unit’s first experiment, Science Vs, grabbed 1.3 million downloads across 11 episodes before it was poached by American producer Gimlet. Linda Bracken, head of content and digital at ABC Radio, told Mumbrella last month the broadcaster was happy to hear pitches from wannabe podcasters.

The most relevant 60 Minutes has been in yonks. Heard enough of 60 minutes and Tara Brown? The veteran TV journalist is on the front pages again today (and, admittedly, in Crikey — see Helen Razer), and has been since news of the incarceration of four 60 Minutes staffers, along with their source Sally Faulkner, broke a week ago.

As of 9.20 am this morning, ISentia figures show 60 Minutes was mentioned 17,597 times in the Australian media across print, radio, TV and online. Tara Brown alone had nearly 10,000 mentions. — Myriam Robin

Bigger than Jesus. Another round of EMMA figures, another round of congratulatory puff from the papers about how well they’re doing. Today’s Australian had an interesting comparison though — it reckons it’s a more influential publisher than Facebook.

“News Corp reaches just under 16 million Australians above the age of 14 each month, compared to Facebook, which reaches 14.9 million.

No one is safe. One of the myths of print media is that newspapers in countries such as India, China and Japan are somehow insulated from the slide in ad revenues and circulation that papers in English-speaking countries such as Australia, the UK, Canada and the US. But at a media seminar in London, the chairman of Nikkei Group Tsuneo Kita revealed that Japan’s premier business paper had felt those chill winds.

“Print media is shrinking dramatically in Japan,” he said. And that that Nikkei’s revenues from print advertising had halved in the past eight years and the paper had lost 300,000 print sales during the same period. Nikkei has a print circulation of 2.8 million a day and 480,000 digital subscribers.

The same conference heard from the CEO of the FT Group, John Ridding, who said the paper had a total aid for readership of 780,000 (that’s print and paywall). Seeing the Financial Times had print sales of 195,000 in February, total digital subscriber numbers are close to 500,000 a day. Ridding said the FT had recently hit the highest paid readership in its history and that the paper had increased revenues from subscription and newsstand sales by 12%. (He did not give a time frame.)

Kita said Nikkei was not looking for an immediate return from the company’s 844 million-pound purchase of the FT last year and would judge the success of the deal over the next 10 to 20 years. He said it was “taking a long-term view, adding that Nikkei’s philosophy was ‘not maximisation of profit’ but the ‘maximisation of content’,” according to a report in the FT. — Glenn Dyer

Blair’s supporters. Andrew Bolt reckons his colleagues have disgraced themselves by trying to get News Corp to distance itself from the comments of Tim Blair on domestic violence:

“This is pathetic — journalists asking their boss to disown a colleague for his satire. We have a problem when free speech is not understood even by journalists.”

He was responding to the scathing letter signed by News Corp’s national house committee calling on  News Corp to reaffirm its commitment to campaigning journalism to combat “the scourge of family violence”, as Crikey revealed on Tuesday.

The issue didn’t come up when Bolt sat down for a relatively chummy chat on The Weekly with Charlie Pickering last night. Though he did say he’s unlikely to get a round of applause at any union meeting.

Bolt’s not on the ABC very often these days. But he will be in a few months — he’s doing a series for the public broadcaster on reconciliation that’s airing next year. 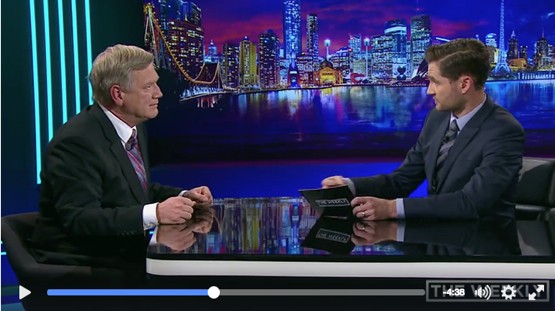 I wondered why Fran Kelly had moved very obviously to the right side of the political spectrum, over recent months.
Spending too much time with Patricia Karvelas…a RWNJ from the Mudrake stable.
The ABC (especially RN) knows how to pick them alright!
Oh! to have Waleed Aly back on RN Drive and some ‘balanced and factual’ material presented!!

Whatever possessed Conroy to savage the GG? Sir Peter is highly regarded around most BBQs, so why would Conroy think that giving him a kicking was a good idea, even a vote winner?
Just when Labor is gaining some traction with the popular vote a cretin like Conroy does his best to sabotage the party. But, no doubt, he can’t abide the thought that Bill Shorten could become Bill Shorten PM?

Coincidentally I’m having a barbeque this evening – I’ll see if everyone regards Cosgrove well!

Pedantic – your BBQ friends must differ from mine. Most seem to think that Cosgrove was one of Abbott’s many Captain’s Picks and, regardless of his personal merits, tainted simply by being chosen by Abbott. And Quentin Bryce as G-G was a class act and therefore a hard act to follow.

The G-G did not help by ignoring Plibersek’s proffered hand. And Conroy made some fair points – where were the High Court judges, the embassy and diplomatic representatives who normally attend the opening ceremony presided over by the G-G?