Dick Smith loads his guns. Businessman Dick Smith has attempted to influence the preselection race for the seat of Mackellar with an advertisement in today’s Australian. Smith has threatened to run against his former schoolmate Bronwyn Bishop if the Liberals preselect the ex-speaker to the seat. While the advertisement doesn’t name Bishop, or the other candidates, it says:

“Please reject the clearly non-democratic party machine. Don’t be manipulated by the factions.”

“Please consider the future of our children and grandchildren when casting your vote to select the Liberal candidate for the seat of Mackellar.”

“I understand that many of you have been told by the Party Machine and the Faction Leaders who to vote for. I point out that you will be involved in a secret vote and that our forefathers fought for the fundamental freedoms in Australia.”

The advertisement focuses on issues of population growth and the Australian way of life. 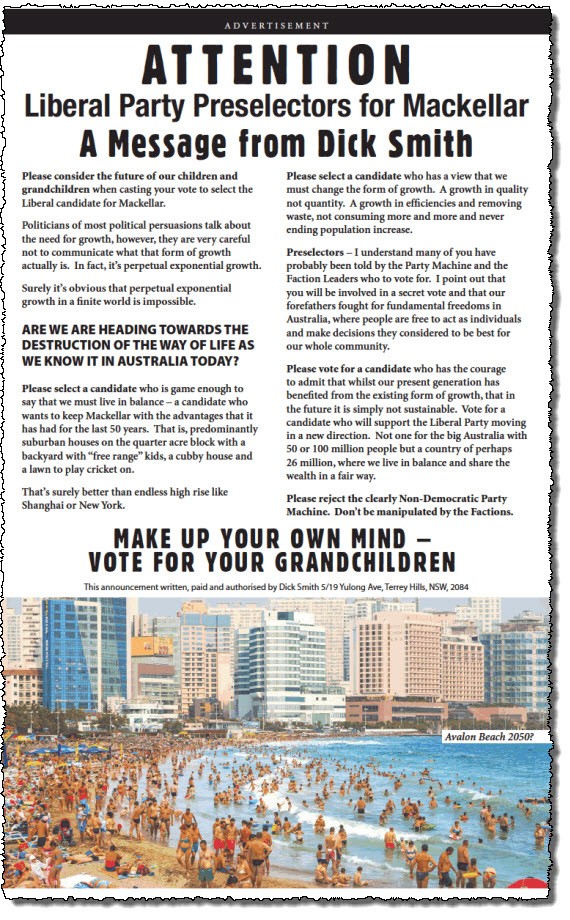 The advertisement is an expensive way to reach the 96 preselectors who will decide Bishop’s future on Saturday. Speaking to SmartCompany, Smith said he was still prepared to run against Bishop as an independent should she be preselected by the Libs, and previous polls show he would be a strong chance to take the seat if that came to pass. He also said that he supported Walter Villatora in the Liberal race against Bishop. The Australian reports today that fellow challenger Jason Falinski has the support of Prime Minister Malcolm Turnbull, with factional heavyweight Michael Photios telling local party members that Falinski is the preferred candidate of the PM, despite public assurances that he supports Bishop.

Nats love helicopters. The New South Wales Nationals have blasted the “metropolitan media” over a report that Deputy Prime Minister Barnaby Joyce chartered a helicopter to visit a town in his electorate last month. The release defends Joyce:

“There’s no airstrip in town, and it’s a nine hour return trip by car from Barnaby’s home base in Tamworth.”

“As they drive back across Lake Burley Griffin tonight these same journalists might want to reflect on how they might deal with a nine hour commute to work tomorrow.”

The release also promoted MPs who have pilot’s licences in order to traverse their electorates, but it seems that Joyce is too important now to start learning:

“Flying has become so much a way of life for country politicians that a number of them have actually obtained pilot’s licenses to help them get around their electorates.”

“Somewhat ironically, Andrew [Broad] was featured less than three years ago in the Sydney Morning Herald for his aeronautical prowess, put to good use traversing his electorate of Mallee in western Victoria. On Friday the same newspaper gave column inches to criticism of Barnaby over what is essentially the same issue. Although, to be fair, to the best of our knowledge Barnaby isn’t licensed to actually pilot the helicopter.

“We’re sure he has other things on his mind.”

Green Army more equal than real army. The Environment Department has revealed for the first time the gender breakdown of participants in the so-called Green Army fighting climate change by planting trees. In response to a question on notice from Senate estimates, the department revealed that in the six months to the end of December last year, 33% of all members of the Green Army were female (or 581 out of 1770 in total).

While that might sound like Tony Abbott’s Green Army is about as diverse as his frontbench was, it’s actually better than the real army. According to Defence, as of April last year, just 15.4% of the ADF’s permanent workforce are female.

The stats from Environment also reveal that there have been 4725 people in the Green Army in total over the life of the project, with the highest number of people being aged between 18 and 19. There has been 1145 projects undertaken by the army, with the highest number in New South Wales (405) followed by Queensland (258), Victoria (157) and WA (145).

Defence to Lambie: thanks for your interest. You have to admire the patience of the public servants tasked with responding to every question on notice from estimates. Jacqui Lambie, a strong critic of Islam, had asked the Department of Defence whether it identified ADF members “who support the imposition/establishment of sharia law in Australia”. The answer was no.

“Does the ADF consider that an indication for support of Sharia law in its members is a sign of Islamic radicalisation?”

To both, the department said it was “not the place of the department to comment on such matters”, and a question about how many of the 100 members of the military who happen to be Muslim support sharia law was deemed not applicable. No doubt Lambie will keep up the fight at the next hearing …

Dick Smith’s ad looks like a campaign teaser rather than an intervention. Expensive, sure, but it’ll get attention because of its form.

Also the whole forefathers stuff comes off as a bit demented.