Subs domains: Libs buy up websites before the election

"Liberal.wtf" is just one of the many domains the Liberal Party has bought ahead of the election.

Peta Credlin websites, submarines for South Australia, and one strange email address. What is the Liberal Party doing with its domain registration?

The biggest issue of the federal election in South Australia will be who will build Australia’s fleet of submarines. Obviously, the government is very sensitive about it and has bought up the “subsforsa.com” domain. Is this a defensive purchase, or is this where the government will announce its policy? Innovation Minister and South Australian Liberal MP Christopher Pyne indicated there would be an announcement about it before the election.

Twitter user Ellipsii, who pointed out the domain purchase last night, also noted that saveoursubs.com is also owned by the Liberal Party, while former Liberal Party director Brian Loughnane owns the domain associated with his wife, credlin.com, and only registered the domain a month after former prime minister Tony Abbott was replaced by Malcolm Turnbull.

The email address used for the domains is also used for domains about Kevin Andrews Joe Hockey, and various spellings on Tony Abbott. For a classic, Kevinolemon is still there, too. Perhaps to thwart his UN campaign? 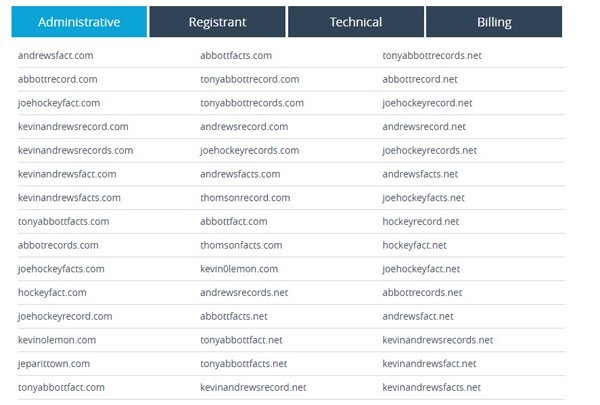 A quick reverse-search of other domains owned by the Liberal Party of Australia reveal more than 500 domains held. We can’t see all of them, but some include “Shortenrecords.net”, which doesn’t appear to go anywhere (yet), “Nothappymalcolm.com”, “laborlies.com”, “lib.fail”, “libs.fail”, and “liberal.wtf”.

Ellipsii points out that the Gmail address used for the websites is [email protected] — a reference to a character in the ’90s kids show Ship to Shore.

A website Crikey had assumed to be about formal voting called “ididntvoteformal.com” appears to be registered to the Greens, and redirects to the Greens website. But then we realised it was more likely an anti-Turnbull website: “IdidntvoteforMal.com”.