Isentia Index: Back on the table, the slowest fast train in the world

Trucks, choppers and steel all got people talking this week.

China builds new ones in about six months, Europe has had them for 50 years, meanwhile Australian governments have been talking about fast trains between Melbourne, Sydney and Brisbane for the last 30 years or so, to zero effect. If the PM is indeed now supporting the idea seriously, this could be the first time it has ever had solid bipartisan support, but of course that didn’t stop Opposition Leader Bill Shorten and Infrastructure spokesperson Anthony Albanese ridiculing the announcement. Never let policy get in the way of politics!

A big week for Bill Shorten, coming out in favour of a banking Royal Commission, reversing Labor’s position of a year ago, and receiving some support from the government backbenches for the idea, while the Road Safety Remuneration Tribunal (which was aimed at setting minimum pay based on the length of routes) might be another battleground as the government looks to abolish it after owner-operators claimed the latest rates would put them out of business.

The bleak-looking future of the South Australian steel industry pushed Innovation Minister Christopher Pyne up the list as he called for more support. And speaking of metals, then there was Clive. The PUP leader and member for Fairfax, Clive Palmer, was the subject of Four Corners on Monday, and controversy around his and his party’s involvement with Queensland Nickel and a number of other companies continues to receive extensive media coverage. 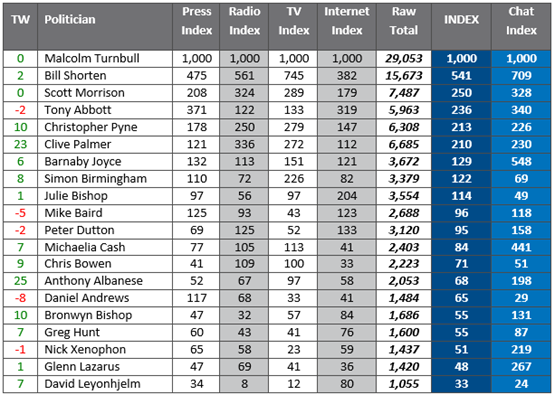 A relatively big week for Bill Shorten on social media, which is usually bad news for a politician, but it’s been a reasonably decent reception, although certainly not all bouquets.

So who was it that really bought that stairway to heaven?

Isentia Index: This election is finally done, and so are the dishlickers

Isentia Index: Who won the first week? Was it Masterchef or the Voice?

I have finally figured out where a fast train could be justified: Sydney to Canberra.

Thus the pollies and their staff could live in Sydney and commute daily to Canberra.