Slipped your mind? A small example of how easy it is to game our ridiculous political donations disclosure system, if you were so minded. The Australian Electoral Commission has just posted on its website a late disclosure by KPMG, sent to the AEC on March 3, which describes donations worth over $117,000 to the Victorian Liberal and Labor parties. We’re not suggesting KPMG is avoiding transparency — it submitted a return describing nearly 20 donations worth more than $200,000 last year, as it is required to do, and included donations well below the reporting threshold, right down to a $65 payment to the Liberal Party. KPMG in fact is one of the better companies when it comes to disclosure; we’d urge other companies to follow their example.

But submitting a late disclosure like this guarantees you’ll get virtually no publicity, because the media really only pay attention to donations in early February when the AEC releases its annual data dump of who gave what to whom. If you were a donor anxious to avoid the spotlight, you’d file a late return, after the February 1 release. After all, there are no penalties for late disclosures to the AEC. It’s only because the excellent automated Twitter account @AusDisclosure now picks them up as they’re filed that we know about them.

One of KPMG’s additional donations is $25,000 given in July 2013, ahead of the previous federal election. Here we are about to go into another federal election in 2016, and we’re only finding out now about donations before the last one. It’s a rotten disclosure system, even when donors do the right thing.

Clinton car for sale. Local media in Gettysburg, America, are reporting that an ex-White House gardener could be selling the last car ever driven by Hillary Clinton. Mike Lawn (yes, nominative determinism, perhaps) is selling a 1986 Oldsmobile Cutlass Ciera, which he says Hillary Clinton drove to the White House in 1992 and he bought from the Clintons at auction in 2000.

“When he purchased the car from the Clintons, he intended to give it to his daughter when she turned 16 and needed to drive to school. He took her to see it after cementing the deal with Clinton, only to find she was not impressed.

“‘She said it looked like an old lady’s car,’ Lawn said. ‘She didn’t know why it had cranks in the windows.'”

Lawn told the York Daily News the first family didn’t know what to do with the car when they brought it to the White House:

“According to Lawn, the Clintons brought the car to the White House because they were moving directly from the Arkansas governor’s mansion to their new digs when Bill was elected.

“‘They didn’t know where else to put it,’ Lawn said. ‘They didn’t have a home at the time. They had been living in a governor’s mansion, and it’s not like they had a private home. It was her personal car, so when they came to the White House, they brought it with them.'”

Hillary told reporters in 2014 that she hadn’t driven a car since 1996 (though she hasn’t been so good at taking the subway, either) — could this be the last car she drove?

No affirmative action for Lambie. Independent Senator Jacqui Lambie has revealed the names of the candidates for her new party, the Jacqui Lambie Network, at the upcoming election. The list of eight candidates doesn’t feature any women, a fact Lambie’s Facebook followers noticed. Lambie says she approached women to run, but they weren’t interested. No one has commented that she is only running candidates in Tasmania, Victoria, New South Wales and Queensland though — maybe the other states don’t actually feel left out … 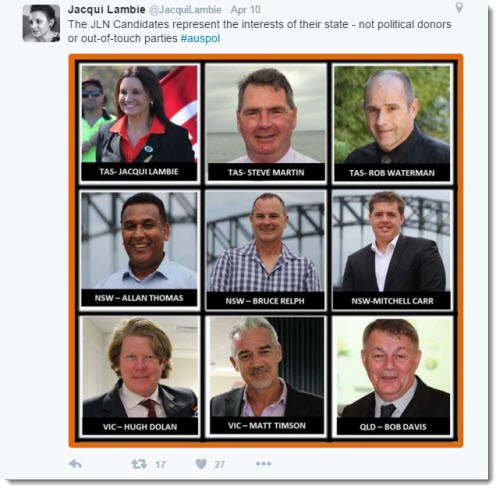 Murdoch on the move. Married life has meant lots of changes for Rupert Murdoch. The media mogul hasn’t tweeted in over a month, and he is now selling his New York townhouse. The West Village residence is on the market for US$28.9 million (A$38 million) and sits across the road from actress Sarah Jessica Parker’s house. The four-bedroom townhouse also features this wine cellar, which is disappointingly bare: 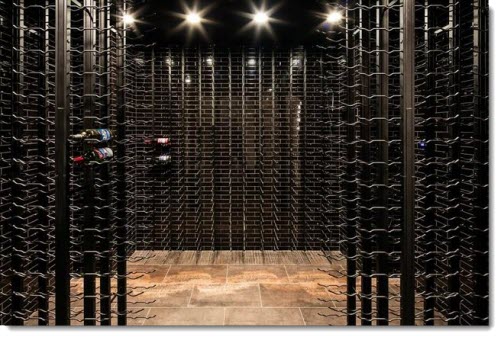 According to News Corp, Murdoch only bought the property recently, which means he wouldn’t have had much of a chance to use the kitchen, described here:

If you have some spare millions lying around, the full listing is just as glorious/ridiculous.

Climate change, what even is it. The Australian Institute of International Affairs will host a luncheon this Thursday that appears to question whether climate change is real. A tipster tells us the event, titled “Dangerous Global Warming — Fact or Fiction? The Limits of the Paris Accord” is an unusual choice for the organisation, and that the choice of speaker is intriguing. The event will be hosted by Des Moore, economist and former deputy secretary of Treasury, but not a climate scientist. The description makes it sound as if attendees will get a side of climate denialism with lunch:

“Almost all governments and international agencies accept the dangerous global warming thesis but have made little progress in reaching an agreement on government action to prevent temperatures increasing by over 2ºC since the 19th Century.

“The Paris Accord, the climate deal struck by 195 countries in December at the Paris climate conference, will be open for signature at the United Nations in New York in April 2016.

“The only substantive agreement made in Paris was on ‘holding the increase in the global average temperature to well below 2ºC above pre-industrial levels and pursuing efforts to limit the temperature increase to 1.5ºC’. With no agreement on the specifics of how to achieve that – where does that leave expensive government policies to reduce dependence on fossil fuels?

“Upholding Tony Abbott’s announced target of reducing CO2 emissions by 26-28 per cent by 2030, Prime Minister Turnbull’s contribution to the Paris negotiations came after CSIRO’s 2015 report indicated that while 78 per cent of Australians believe climate change is happening, only 45.9 per cent believe it is human-induced.

“Where does the science currently stand, and what does the Paris Accord mean for Australians and the future of our economy?”

“Where does the science currently stand, and what does the Paris Accord mean for Australians and the future of our economy?”

Well that could cover the first two minutes. 95% of scientists with real credentials in the business believe that climate change is real, and human induced. Next!!!!!!!!

Dog’s Breakfast, as an Infants School youngster in the 1940s I knew from reading the Sunday Newspaper comics that Climate Change was real and SOME of it resulted from human actions, so it’s hardly surprising that the Leasers of ALL major Australian Political Parties also know it.
It’s the “next” part where you’ve become lost, which is understanding that the simplistic ;solutions’ pushed by Crikey Denizens and many others are unscientific, non=rational nonsense.

Well that could cover the first two minutes. 95% of scientists with real credentials in the business believe that climate change is real, and human induced. Next!!!!!!!!

It used to be 97% of scientists.
This was based on a survey of ” 10,257 people, of which 3,146 respondents were further whittled down to 77 self-selected climatologists of whom 75 were judged to agree that human-induced warming was taking place.”
At the time the survey was done 30,000 other scientists disagreed with the concept of human-induced climate change.
I hope the Australian Institute of International Affairs has a lively discussion, on where the science currently stands.

John, there has never been any intellectually sound doubt that human activities contributed to Climate change. What IS nonsense is how so many people (including the numerous usual suspects inhabiting Crikey Land) misinterpret what the evidence sets out.
Crikey subscribers are disadvantaged of course by the manner in which the Crikey Commissariat censor Posts.

I hope the Australian Institute of International Affairs has a lively discussion, on where the science currently stands.

It would be similar to the Catholic Church having a lively discussion about homosexuals. Much fanciful speculation, few facts, no relevant conclusions.

To the best of my knowledge not a single credible scientific body in the world disagrees with climate change science. I’m afraid the Oregon Petition, even with its inclusion of well-known climate experts like Geri Halliwell and “I.C. Ewe”, just doesn’t carry the same sort of weight.