Sorry, Mal, here’s proof the ABCC was not good for productivity

Malcolm Turnbull has got it all wrong on the construction industry, writes David Peetz, professor of employment relations at Griffith University.

On 7.30 recently the Prime Minister dismissed the Productivity Commission’s findings on productivity growth in the construction industry in favour of those from a small consultancy firm. He used the small firm’s findings to support a claim that the Howard government’s legislative reforms in that industry had led to a 20% increase in construction productivity, which had “flat-lined” under Labor.

Actually, though, things were a bit different. To see how we know the industry didn’t flat-line, and why Turnbull said it had, we look at:

1. What reforms are we measuring?

The debate is all about special laws on industrial relations in the construction sector. In 2005 the Howard government passed laws creating the Australian Building and Construction Commission (ABCC). The legislation provided for six months’ jail for anyone refusing to co-operate with ABCC inquiries, or speaking about such inquiries to anyone, and increased penalties for other breaches of industrial law. This didn’t just apply to construction workers; a passer-by (an academic, in fact) on a street near a building site was interrogated for hours and threatened with jail if he spoke about his interrogation.

But even more important than the legislation itself was how it was administered.

In September 2010 the term of the Howard government’s appointee to the top job, John Lloyd, expired, and he was replaced by a Gillard appointee, Leigh Johns. Gillard had already imposed some restrictions on Lloyd’s activities in 2009. During most of Lloyd’s term, the coercive powers mentioned above were extensively used. But Johns adopted a very different approach; he was much less antagonistic to unions. The use of compulsory interrogations dropped by 90% in 2010. Lloyd criticised Johns for pursuing sham contracting by companies — he labelled it a “trendy” issue — at the expense of prosecuting unprotected strikers.

In June 2012 the legislation establishing the ABCC was repealed and new legislation, retaining some coercive powers but with more safeguards, took its place.  The ABCC was replaced by the Fair Work Building Industry Inspectorate (which goes by the acronym FWBC). Johns moved across to head that body. As the ABCC under Johns had not been using its full powers, not so much changed with the new legislation in place.

In October 2013, after the election of the Abbott government, then-minister for employment Eric Abetz put Nigel Hadgkiss into the top position, replacing Leigh Johns, who had resigned. Hadgkiss was Lloyd’s deputy in the Howard years. Hadgkiss accused Johns of having struck “deals” with the construction union. Hadgkiss was described as “tough” and the “right man to restore rule of law in construction” by mining employers and as a “well-known union basher” by former union official Brian Boyd.

2. What do the official data show about productivity in that industry?

The chart below shows labour productivity from 2005 onwards, in the construction industry and nationally, according to the ABS National Accounts.

What is immediately apparent is how labour productivity in construction moved in tandem with national level productivity until 2011. There is no discernible effect from the ABCC legislation and the Lloyd years. 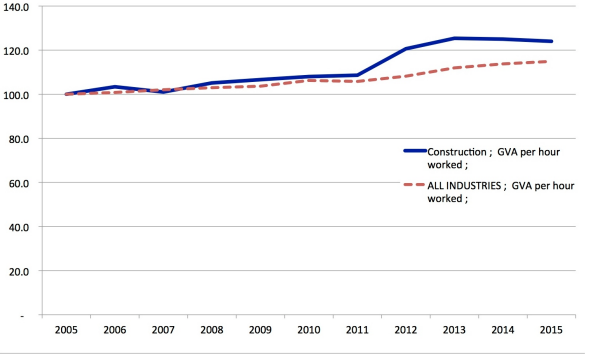 Then, in 2012 and 2013, there were large improvements in construction productivity that were not matched by the rest of the economy. Yet these were years when Labor’s appointee, Johns, was in charge of the ABCC and the FWBC, and coercive powers were rarely used.

The second chart makes this pattern slightly clearer. It shows the average annual growth rates over the three periods. 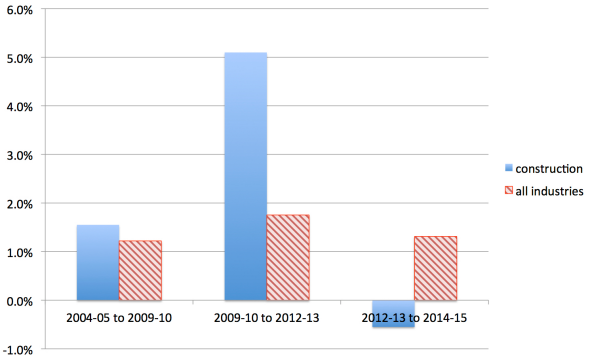 Across the economy as a whole, the average annual growth rate did not vary much between these periods. But productivity in construction did: in the Lloyd/ABCC period, at 1.6% per annum, fairly similar to growth in the economy as a whole; in the Johns period, at 5.1% per annum, or well above national growth; and in the Hadgkiss period, at -0.5% per year, it was well below it. (If you want to split the Johns period into the ABCC and FWBC sub-periods, the numbers were 5.7% and 3.9% respectively, both well above the rates achieved under the more aggressive regimes.)

In short, the evidence suggested that productivity in construction was best when coercive approaches were not followed.

3. Why did the Productivity Commission and a consultancy firm differ on the issue?

The consultancy firm the Prime Minister referred to — originally called Econtech, then KPMG Econtech, then Independent Economics — had been commissioned by the ABCC, and later by a construction employer body, to try to prove a point (that the ABCC had done a great job). It published and republished largely similar reports, mostly updates using the same assumptions as the previous version.

At the core of the original Econtech analysis was a spreadsheet error, which some colleagues and I identified. Econtech eventually admitted this, but never changed the estimated productivity gains it claimed arose from the ABCC. Instead it made selective (and contradictory) use of start and end dates and questionable techniques to try to maintain the original finding.

The Productivity Commission obtained the original data we and Econtech had used, and found no error in our analysis. It concluded that “it cannot be maintained that the data show — even in an indicative sense — that aggregate productivity improved because of the BIT/ABCC” (see page 786).

*Read the rest at John Menadue’s blog, Pearls and Irritations

This article shows how journalism should be done.
Factual, relevant, evidence based, use of primary sources, balanced, credible, authoritative, provides context and background, logical, well presented.

Ironic that the author is not a journalist.

Our PM, with verbal diarrhoea, was in Perth this morning, holding a press conference and repeating the untruths of the Econtech version of these data…amongst other fibs.
The journalists? Why they lapped up every word…absolutely NO contest to the PM!
This was broadcast live on ABC News Radio…I despair!!

Rebecca Weiss repeated the line that the cost of building rose by twenty per cent when the ABCC was scrapped on The Drum last night, unchallenged.