Channel Nine speaks out on 60 Minutes scandal. And other media tidbits of the day.

Q&A: column inches edition. What did we ever talk about on Tuesdays before Q&A began? 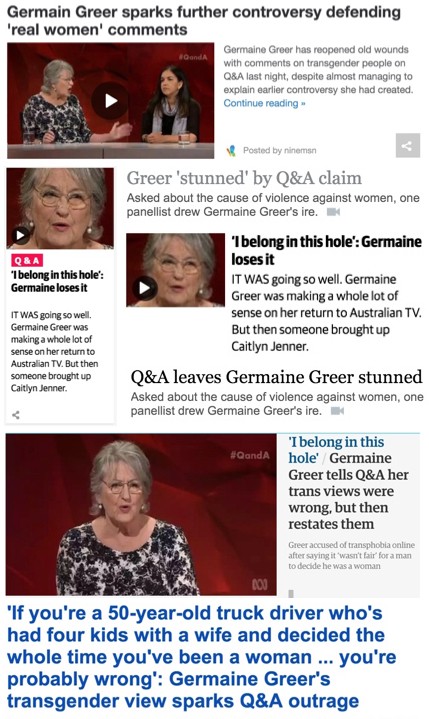 There’s a special irony in News Corp mastheads — today it was News.com.au and the Herald Sun; recaps are also posted at The Australian — so reliably filing on the utterances of the ABC’s Monday night guests, given their carping over Aunty’s apparent failures to break news and cutting the company’s digital grass. Where would all those clicks come from if it weren’t for Tony Jones’ probing? — Jason Whittaker

Can’t stop the media. Channel Nine would, of course, prefer everyone stop reporting on what its employees did or didn’t do in Lebanon. But there’s little chance of that happening.

Fairfax has published an extraordinary story reliant on text messages sent by Australian Sally Faulkner to a child recovery expert in Australia that appear to show she could have gotten out of Lebanon with her children, but 60 Minutes, whose journalists were already in custody, wouldn’t pay for the extraction operation. Meanwhile, other child recovery experts have slammed the operation on ABC radio; Media Watch last night was scathing over the whole affair; and this morning’s News Corp tabloids are also critical … 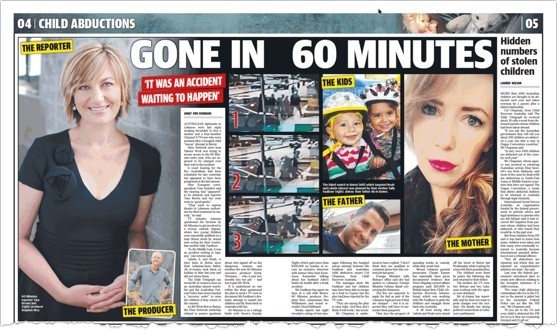 The coverage appears to have flushed out Channel Nine, which made a statement this morning:

“Regrettably a number of inaccurate media reports are exacerbating the concern and confusion of the families of those being detained.

“Media reports, including those based on inaccurate or unreliable sources, could be used in evidence and coverage of information that could not be made public if these proceedings were in front of an Australian court, could be highly prejudicial to the proceedings in Lebanon.”

We doubt it’ll do much to halt the coverage — there doesn’t appear to be much sympathy for Nine or its crew. But it does put on the record why Nine has been so reluctant to answer questions on its actions so far. — Myriam Robin

Go back to singing in the shower. TV viewers around the world are finally weaning themselves off singing/talent shows after American Idol faded to black on Fox in the US last week, and the latest series of The Voice on the BBC had its worst ever final ratings.

The great age of talent shows erupted 14 years ago with American Idol after Fox used it as a summer program. Not all the programs are going to follow Idol out the door right away, but their time is up, and TV networks are going to struggle to fill the spaces — especially ITV in the UK (which is already facing weakening viewing levels). And the other great reality program genre — Big Brother and all its grubby clones — has come and gone here (and is dying off elsewhere).

Closer to home, Australia’s Got Talent has flopped for Seven. Australian Idol vanished long ago from Ten. Seven is keeping The X Factor going here — but it is fading.

Only dancing programs are still doing well (Dancing With The Stars in Australia). All are aimed at the despised (in TV marketing terms) over 55s. Unwanted by advertisers, they are proving to be more loyal to some programs than are the supposedly more lucrative younger viewers. — Glenn Dyer

Desperate times breed desperate solutions. The Daily Mail and General Trust, owners of the Daily Mail tabloid in the UK and the massive Mail Online news website, is following Time Inc down the road to the last-chance saloon in joining the rush for the web assets of Yahoo Inc, the faltering digital success story.

News emerged last night that DMGT is in talks with several private equity firms about a possible bid for Yahoo. Time Inc is also considering partnering with a private equity firm on a bid for Yahoo’s core internet assets. A string of private equity groups are said to be interested, and US telco Verizon, which last year paid US$4.4 billion for AOL (including The Huffington Post), is also said to be interested and the only company with the resources to buy. Yahoo has already postponed a first-round bid closing date from yesterday to next Monday, US time, ostensibly to allow for more bidders to emerge.

Time Inc is too small — market value of US$1.3 billion — to bid for all of Yahoo, or the internet assets. It needs private equity finance. Likewise, the Daily Mail Trust is too small; its value is just over A$4 billion, which is roughly the value of the assets on offer, according to news reports. But it has ambitions. Reuters says DMGT has two approaches: the first is a private equity group acquires Yahoo’s core web businesses and the trust takes over the news and media properties; the other is the private equity group would acquire Yahoo’s core businesses and merge its media and news properties with the online ones of the trust (Mail Online). The merged units would form a new company that would be run by the Mail and give a larger equity stake to the Mail’s parent company than under the first idea. — Glenn Dyer

Council marks shift with conference. Is the Australian Press Council a complaints body, or an industry group with as much responsibility to advocate for the media as to keep it honest? Under chair David Weisbrot, the council has taken a distinctly more collaborative approach to relations with its members. As part of its 40th anniversary, celebrated with a conference in Sydney on May 4 and 5, the body will be awarding two Press Freedom medals to journalists who fight for press freedom.

“The inaugural award winners are absolutely outstanding journalists who overcame threats and major obstacles to ensure that critical stories saw the light of day,” said Weisbrot. “In future years, the Press Freedom Medal could just as easily be awarded to a judge who makes a crucial ruling that bolsters press freedom, or a community group, or individual activists who in their own way have contributed substantially to press freedom.”

Front page of the day. Farewelling the country’s most interesting mayor … 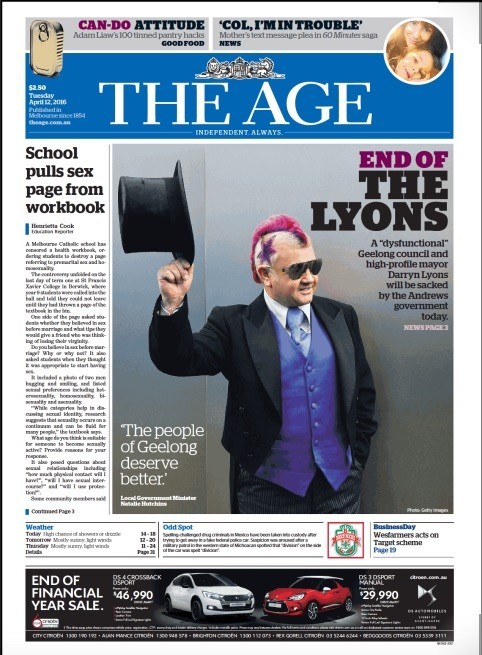 As a general guide, anyone in the media commenting on the Sixty Minutes matter should strive for the same level of discretion, eschewal of tacky sensationalism and emotional voyeurism, common-sense, fairness, fidelity to the facts and concern for the dignity of the subjects at the core of the story as the Sixty Minutes program has, over the last several decades.