Malcolm Turnbull's standing with voters has fallen and tax fairness is an increasing concern to the electorate, this week's Essential Report shows.

Voters are now evenly divided as to whether they approve or disapprove of Prime Minister Malcolm Turnbull, while Bill Shorten continues his slow recovery, today’s Essential Report shows.

After soaring effortlessly in the esteem of voters after he removed Tony Abbott last year, Turnbull is now poised on the verge of a negative net approval rating, with 39% of voters approving and 39% disapproving of his performance. Turnbull had a 30-point net approval rating in the aftermath of his defeat of Abbott and a 36-point net rating in November, which has now vanished. In March, 45% of voters approved of Turnbull’s performance compared to 35% who disapproved. Since then, Turnbull has stumbled with his short-lived state income tax proposal and a threat to abandon public school funding while retaining private school support.

Opposition Leader Bill Shorten, however, has recovered to his best (or perhaps more accurately least-worst) figures since before his appearance at the trade union royal commission last year, with 30% of voters approving of his performance — up three points, and his best since June last year — and 44% disapproving, down three. Turnbull, however, still leads handily as preferred prime minister 44%-22%, although that’s down from 48%-19% in March.

The government also faces a growing problem around the issue of tax fairness: 55% of voters believe the current tax system is not fair, including 25% who think it’s not fair “at all”, while 36% believe it’s unfair. Liberal voters are more likely to believe it’s fair (48%) than unfair (44%), but every other group believes it is unfair. That compares to 52% who agreed it was unfair and 40% unfair in December.

Voters’ perception of fairness changes as their incomes increase, with higher-income earners less likely to see the tax system as unfair, but even high-income earners (over $2000 per week) split evenly 45%-45% on fairness.

And the most strongly supported tax reforms are those that are most contrary to the government’s kite-flying on tax reform: 86% of voters support stopping companies and wealthy people using legal loopholes to minimise tax payments by sending funds offshore — including 65% who strongly support it. Eighty per cent of voters support forcing multinational companies to pay a minimum tax rate on Australian earnings — up from 78% in December; 65% support increasing income tax rate for high earners. Support for the removal of negative gearing has also hardened slightly since December, with 39% wanting negative gearing scrapped, compared to 37% back then. 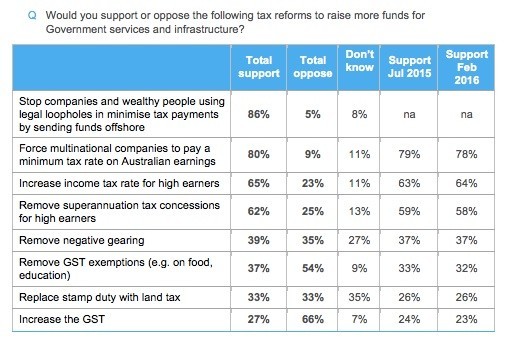 There’s better news for the government on the Australian Building and Construction Commission, however — voters back the re-establishment of the ABCC 35%-16%, compared to 35%-17% in March, but 27% say they don’t know.

On voting intention, Labor is down two points to 35% but the Greens are up a point to 11% and the Coalition remains on 42% for an unchanged two-party preferred outcome of 50%-50%.

With the numbers reported in this poll on tax arrangements, I simply do not believe the 50% 2PP.
It doesn’t make sense, when Labor have already announced it will introduce various measures to correct the imbalance on those who do not pay their fair share of tax.
Let’s wait for the next Newspoll!

Never should have bought the Utegate.

CML and klewso, what you don’t allow for is that despite the unjustifiably generous treatment of Shorten et al by the capitalist media (including Crikey) Australian Citizens have become wary of the snake oil salesman types pushing the Union / Greens / Shorten / “Independents” quartet.

Norman … what YOU don;t allow for is the increasing disillusionment with ALL of the major parties … with a 2PP value that is reflecting past performances rather than current proclivities. Fer instance – I would have bee a swing voter, between Lib/Nat and Lab – but no more!
I intend voting Independent, preferencing pother indies, and putting the incumbent (the Deputy PM, as it happens) stone motherless last! This is not unusual in the land beyond the cities, where actual “representation” is not as triffic as it might be especially when the local member is compelled to vote as the party machine (which is city-centric) dictate, regardless of what his electorate actually think he should vote for.
You also do not allow for the fact that the electorate has become seriously disenchanted with the bullshit (oops, sorry, rhetoric) used by the major parties.
To quote the Bard … “A pox on both their houses!”

Norman get used to a Menzies like ALP/green reign..18 years wasn’t it…? The trickledowners are finished..