Another reason why ASIC funding has been cut

John Richardson writes: Re. “How can ASIC police the banks when it has been gutted?“, yesterday. Scott Morrison, Josh Frydenberg and Peter Dutton weren’t the only members of Tony Turnbull’s disaster-management team on hand this past week trying to explain-away the racketeering that has become a feature of Australia’s banking sector in recent years. Up front and ugly was another of the coalition’s usual suspects, leading baby-faced Liberal head-kicker & knuckle-dragger Steve Ciobo.

According to Steve’s well-rehearsed spiel:

“We have had so many inquiries into the banking sector over the last 20 years … there are volumes and volumes and volumes of reports, inquiries, recommendations … ah, that sit on shelves gathering dust … the point is though, that we are talking about a sector that has a tough cop on the beat in terms of ASIC; it’s already got regulation in terms of APRA, it’s already got close scrutiny by the Australian Competition & Consumer Commission. We’ve got an Ombudsman that also has oversight over the industry …”

Steve once promised that the government would strip Australians of their citizenship if they said stupid things, but for some reason he’s still here. On a more serious note, Steve’s insightful tribute to the consistent failure of our politicians and the institutions allegedly established to protect society from the predations of this cabal of rotten swindlers, highlights exactly why a royal commission is required to put an end to their rotten racket.

Ian Hunt writes: Bernard is right: ASIC has powers to prosecute — which royal commissions do not have — but it does not have powers of investigation that a royal commission can have, partly because it is underfunded. It also should not investigate the question of whether it can do do the job it should, which a royal commission can do. So the government’s protests are just a smokescreen for their unwillingness to investigate the relation between the big banks and their customers, and whether customers have sufficient protection from the power that banks have over customers through the greater access to information they have. 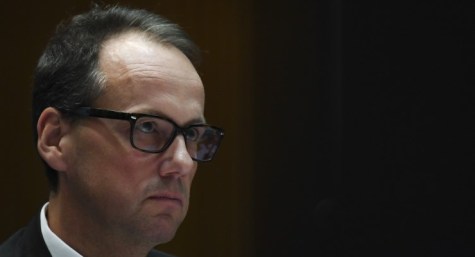 Nice description of Ciobo by John R. Steve Yobbo. He’s what you get when you put a suit on a SE QLD bogan.

Turnbull did some great work earlier getting rid of Young Otto and Andrews, continued it with McFarlane, and then goes and screws it all up by appointing Ciobo to a ministry! Go figure!

Absolutely correct, Lee…I’m still getting over the Ciobo-Zachy affair on Q&A!!!

Ciobo was that fellow who recommend that Julia Gillard should have her throat cut wasn’t he? A person like that shouldn’t be entrusted with anything more important than dusting the table legs? There may have been millions of enquiries into the behavoiour of banks but to what end? They still behave unethically and will keep on doing so. There is no purpose in finding out what the latest bank caper is if all that happens is a “Tut tut keep the noise down a bit or people will notice”.

Agree with LeeT on John’s perfect description of the Ciobot – I cannot recall the last time I saw such an unsuccessful impersonation of a sentient creature.