Pay attention to meeeeee. Embattled MP Clive Palmer has done a great job of promoting tonight’s episode of Four Corners about him and his business dealings, spending the weekend claiming the program hasn’t given him a fair go because it declined his demand to be interviewed live. 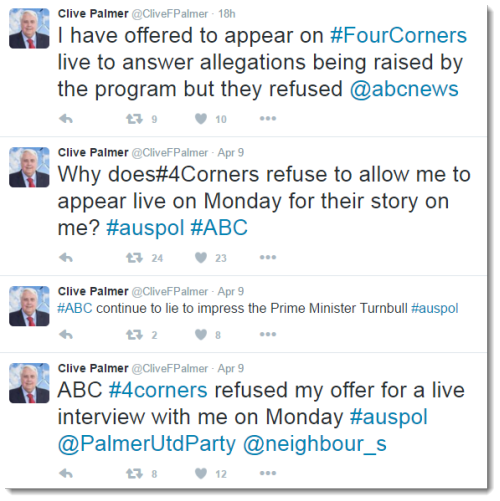 The program’s executive producer, Sally Neighbour, and reporter Hayden Cooper have both replied to Palmer’s tweets saying he has had multiple chances to be interviewed and respond to questions but he has chosen not to.

Palmer has also posted to Facebook accusing the program of inaccuracies. Perhaps he could have fixed those inaccuracies if he had agreed to a taped interview …

When is a noose not a noose? Anti-same-sex marriage group Marriage Alliance has been slapped down by the Advertising Standards Bureau, which banned the use of the group’s social media post depicting a woman with a rainbow noose around her neck. The image was posted on Twitter in February with the message “same sex marriage increases PC bullying in the workplace”. Complaints made to the advertising watchdog include that its reference to suicide is inappropriate. 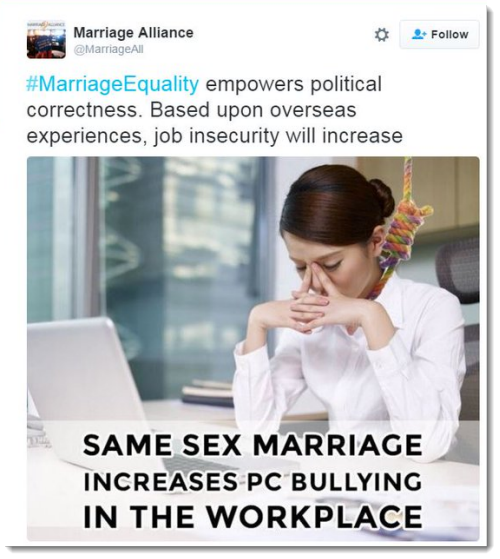 “The depiction of a person seemingly about to commit suicide by a specific method, as is done in this advertisement, is highly distressing for friends and relatives of people who have died by suicide and people with a past history of suicidal ideation,” said one complainant. The Marriage Alliance responded to this is by saying that it is not possible to commit suicide while seated. We’ve included the full text, including the logic that a noose is related to choking, but not to death: 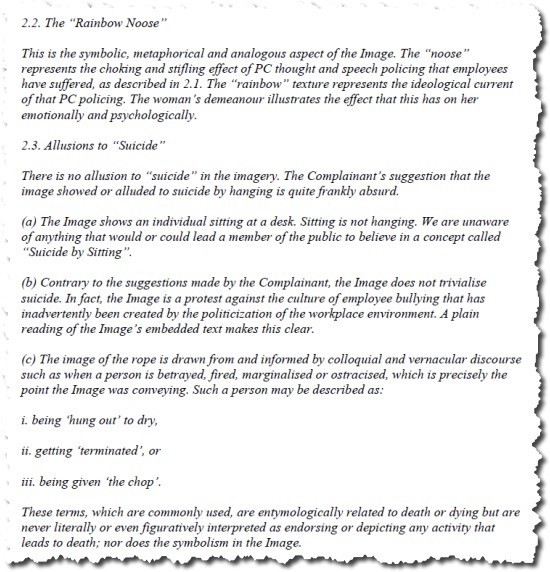 Lyle Shelton goes Godwinning. Director of the Australian Christian Lobby Lyle Shelton has compared “some of today’s cultural and political trends” to Nazism in a blog post for the Pentecostal Hillsong church. He quotes a book by Eric Metaxas, a speaker at the upcoming ACL conference, about Dietrich Bonhoeffer, a Lutheran who challenged Hitler’s regime:

“Isn’t it dangerous to draw comparisons with the Nazis? It is often said that whoever invokes Hitler first in an argument loses.

“That may be so but as I read about Bonhoeffer, I can’t help but be struck by the similarities between then and now.

“I’m certainly not suggesting we are about to be overrun by men in jackboots marching the innocent off to death camps.

“Nonetheless, many of us are sensing there is a political and cultural pushback to being a serious Christian in the public square.

“A Catholic Archbishop, Julian Porteous, is currently before the Tasmanian Anti-Discrimination Commission for distributing a very respectful booklet about marriage.

“This has come as a shock.

“But I am concerned about some of today’s cultural and political trends and the silence from us as Christians.”

The case before the Tasmanian Anti-Discrimination Commission is yet to be heard, but apparently even being challenged means we are on the same road as the Nazis.

*Heard anything that might interest Crikey? Send your tips to[email protected] or use ourguaranteed anonymous form

Serious christians? Good luck finding one in the hillsong “church”. Pentecostal hysterics is what they are. I heard Scott Morrison is one of them,

Clive wanted a live interview so he could storm out in a huff, I presume.

You know who else wrote an essay about Bonhoeffer.

Wait. That came out wrong.

No-one in their right mind would allow the Clivosaurus live air time.
He would fill it with equivocation, obfuscation, bluster and abuse of the interviewer – not to mention outright lies.
Then storm out.