How can ASIC police the banks when it has been gutted?

The government says ASIC is all that is needed to police the banks -- but it has savagely cut the regulator's funding.

The agency the government is invoking as its justification for not holding a royal commission into the banking sector has had its budget slashed, lost 14% of its staff and faces more funding cuts in real terms in coming years. And the Australian Securities and Investments Commission admits the cuts have already significantly diminished its capacity to pursue corporate crooks.

“ASIC has the powers of a royal commission. In fact it has greater powers,” Treasurer Scott Morrison said on Friday, dismissing the case for Labor’s proposed royal commission into banks. This “tough cop on the beat” line was repeated by Resources Minister Josh Frydenberg and Immigration Minister Peter Dutton on the weekend.

Despite whatever powers ASIC might have — and the separate issue that ASIC has, for many years, been reluctant to use those powers against the big end of town, in favour of going after targets less likely to fight back, and has been extraordinarily incompetent on the few occasions it has gone after the big banks — the regulator has suffered massive cuts in recent years that have materially degraded its activities.

Labor started the cuts: in 2012-13 it reorganised ASIC’s Outcome-Output structure, the framing for its appropriation, and the organisation had to budget for 31 fewer staff out of 1851 people. Its main suite of regulatory activities were now clustered under what was called Program 1.1 , and while its budget for that year rose from $427 million to $433 million, it was planned to be reduced via efficiency dividends across forward estimates to $415 million by 2015-16. However, the following year, in the last Labor budget, ASIC was actually given a small increase again: its funding for Program 1.1 would instead only fall to $426 million in 2015-16 and $417 million in 2016-17; four of those 31 lost staff would be restored.

But when the Coalition was elected, it not merely kept Labor’s scheduled reductions, it doubled down and dramatically cut ASIC. The 2014-15 budget cut ASIC staff to 1573 staff and its Program 1.1 appropriation for 2014-15 was cut by $20 million to $415 million and the 2015-16 budget was cut to $395 million. Last year, the bloodletting was temporarily slowed. ASIC’s Program 1.1 budget went back up $401 million, but it actually lost four staff and its funding is still scheduled to fall, every year, across forward estimates. Nor had the cuts stopped. In this year’s Portfolio Additional Estimates Statement, ASIC’s 2015-16 budget has been cut again to $391 million, with around $5 million moved into next year’s appropriation. 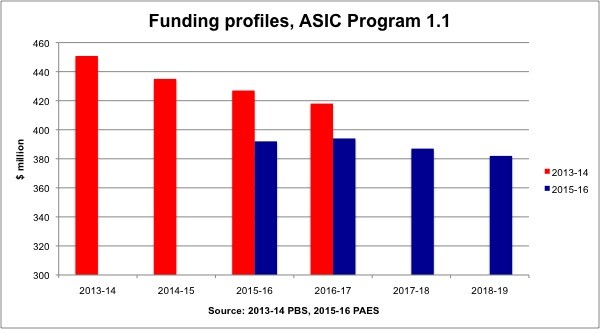 It means that between now and 2018-19, ASIC faces a further 9% funding cut compared to if its funding had been held steady in real terms.

The cuts have had a very real impact on ASIC. Chair Greg Medcraft outlined the impact to Senate estimates in 2014, explaining “our proactive surveillance will substantially reduce across the sectors we regulate and, in some cases, it will stop”. Later, he told Labor Senator Sam Dastyari:

“We are basically adjusting our discretionary activities, and proactive surveillance is a discretionary activity. We are doing it on a risk based approach; we have had to adjust our risk appetite. So those areas we regard as medium risk we will no longer pursue, and those that are medium-high and high are the ones we are focused on… the answer is that we will not undertake the same level of proactive surveillance that we did previously, and we will have to be more careful in selecting those matters which we do pursue … rather than us going out and finding the committing of white-collar crime, we have to rely more on Australians letting us know where they see it.”

This was at the same estimates session when another ASIC executive described the current corporate environment as “a target-rich environment” for the regulator. But despite the large number of targets, the government has not merely savaged ASIC’s resources, the cuts are going to continue for years to come. ASIC may indeed have royal commission-like powers, but is unable to use them to proactively pursue corporate crooks — and that’s a deliberate choice by the Coalition.

Another reason why ASIC funding has been cut

ASIC should be funded outside of the general revenue. In Hong Kong, its equivalent, the SFC is funded by a tiny (almost unnoticeable) levy on every transaction; this enables it to plan and expand. In good years (for the market), it makes a surplus, in bad years (i.e. poor turnover years) it breaks even or draws down on its accumulated funds. It works extremely well, gives it autonomy and is also good in principle as why should the general taxpayer pay for the market regulator – it should be (and in HK, is) paid for by the market participants

Surely the terms of reference for the Royal Commission into banking can ensure fhe current and previous leaders of the Liberal Party are called to testify even if it is about events 20 years ago.

Such cant and hypocrisy from the LNP on this one. A royal commission was required into the construction industry that was built on thuggery, which largely affects nobody outside that industry, but the finance industry that sucks on the teat of every last dollar in the economy and does it with ample examples of incompetence, lack of ethics and possible criminality, and they want to ignore it.

Political donations should be banned from the finance sector for the feds, as are developers et al at the state level.

It seems to me that there are two main issues. First, as you note, the Coalition has repeated ad nauseum that ASIC has the same powers (or more) as a Royal Commission. Is this in fact true? If it is not true, then the Coalition should be called on it. As it is, the interviewers just seem to accept those assertions at face value.
Secondly, regardless of their powers, any organisation is powerless to perform its statutory function if deprived of the resources (money and manpower) to carry out those functions. Again, the interviewers seem bereft of basic knowledge on this point. It would be a strong counterpoint to make to the assertions of Morrison et al.
What is wrong with our so-called journalists that they seem incapable of actually being journalists and are really no more than stenographers for the powerful.

If these regulations are working as well as these politicians are saying – to protect benefactors and deflect the call for a royal commission – then why do we get such a stream of such amoral money-grubbing activity? It seems that every other week one bank is caught out, the next it’s another – taking it in turns? Which, when one of them is caught out break out in that tired, well-rehearsed chorus of “We can’t stress how sorry we are” : before turning around to see what they can do next to milk more from we rubes?
[Where, in Bankish, “Customers” (as in “come first”) roughly translated = “shareholders/profits”?]