Peter Dutton says don't believe anything you read in The Guardian, it is "frankly discredited". Plus other media tidbits of the day.

Who says print is dead? Fairfax, believe it or not, has started two new papers.

Today it soft-launched a 16-page free paper edition of the Brisbane Times, its free website that’s been providing the Courier-Mail with some measure of competition in Brisbane since 2007. It did the same thing in Perth with WAToday — the papers are being hand-distributed in the city and inner suburbs. 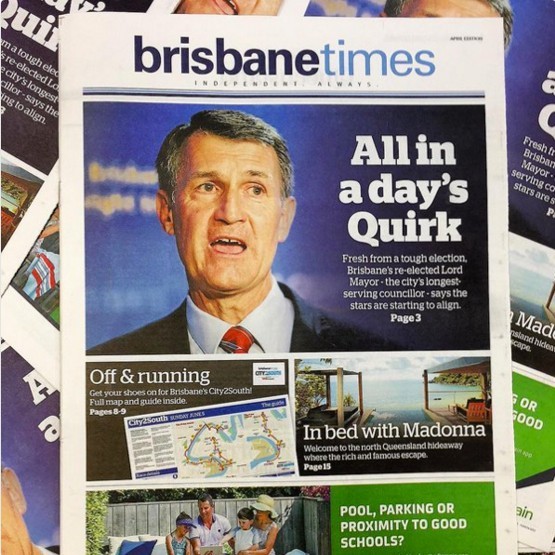 The front cover of both papers just says “April edition”. Crikey understands Fairfax, which printed fewer than 10,000 copies, is not locked in to printing any more but will decide based on take-up.

A frankly discredited online newspaper. Immigration Minister Peter Dutton has hit upon a way to avoid answering questions about anything The Guardian breaks, apparently.

In an interview with Radio National’s Fran Kelly on Tuesday, he was asked about claims that were children still being held in reclassified parts of detention centres, as reported by Guardian Australia‘s Ben Doherty.

“There’s one particular, frankly discredited online newspaper that runs this allegation …” he told Kelly. Not that she let him get away with saying just that …

Copper article a surprise to management. Why did the ABC wait six months to publish a piece critical of the Coalition’s NBN policy until after the election? According to the ABC, the journalist who wrote it, Nick Ross, published it off his own bat “without consultation from management”.

The article, about the state of Australia’s copper network, wasn’t published until six months after it was written, Ross has said — only appearing a fortnight after the federal election.

Greens Senator Scott Ludlam asked the ABC why it had refused to publish the article for so long. In its answer, the ABC said:

“The copper wire article was submitted to ABC News management by Mr Ross as a further instalment to an 11,000 word piece that analysed the Coalition NBN plan. That previous piece had already addressed the issue of the state of the copper network and had followed a series of other articles by Mr Ross that had focused on the Coalition’s NBN plan.

“ABC’s Head of Current Affairs was concerned that Mr Ross had not published any equivalent analysis of the then Government’s NBN policy, which was also subject to public criticism over its design, roll-out, cost and delays. In this context, the Head of Current Affairs advised Mr Ross that imminent publication of the piece, without first exploring issues on the other side of the debate, could lead to the impression that he was involved in partisan advocacy. The Head of Current Affairs was also concerned with Mr Ross’ compliance with ABC Editorial Policies, which direct content makers to “present a diversity of perspectives so that over time no significant strand of thought or belief within the community is knowingly excluded or disproportionally represented (Editorial Standard 4.2)”.

The ABC’s answer claims Ross agreed to write a piece with another perspective on Labor’s NBN plan, but never did. — Myriam Robin

A question of style. From June 1, the stylebook of the Associated Press, which is the standard reference for American journalists and so tends to bleed into Australian style, will advise journos and editors to avoid the term “mistress”, as it has no male equivalent. In its place, it suggests “companion”, “friend”, or “lover”, as appropriate. It also advises caution in the use of the term “accident” for car wrecks and other collisions where negligence is possible. “Accident” implies happenstance and lack of responsibility” — terms like “crash” or “collision” do not have the connotation. More at the Columbia Journalism Review

The most interesting man in space. So it’s farewell to the most interesting ad campaign in the world. For several years, Dos Equis beers have been advertised with a spot called “The Most Interesting Man In The World”, which featured mock-up clips of a mid-century playboy type — leonine beard (starting black, going grey), black-tie getup in a snowstorm — in the most improbable half-remembered gossipy moments of the century, from pranking the Aga Khan with a french horn on an ocean liner, to winning a jai alai competition, to rescuing a lamb from a snowstorm, while an entire dinner party of guests trail behind him. Best of all, they’re all done in the media textures of the time: newsreel black and white, bright technicolour, ultrabright ’70s TV NTSC vision. Over these clips, a dry commentary intones his virtues: “He once had an uncomfortable moment to see what it felt like … he speaks French, in Russian … He is the life of parties he hasn’t been to … he is the most interesting man in the world …”, ending with the invocation: “I don’t always drink beer, but when I do, I prefer Dos Equis … stay thirsty, my friends.”

The ads varied in quality, but they were never less than amusing. As they accumulated over the years, they became a sort of shorthand memorandum of 20th-century obsessions, of a certain idea of glamour associated with the great age of travel, before the planet was shrunk by the digital revolution. The character is a fusion of Hemingway: the beard, the scenes with great leaders, the adventures and feats of daring (running the bulls, towards the bulls) with someone like Porfirio Rubirosa, the so-called “last playboy”, a Zeligesque figure in the frame of every celebrity photo from Acapulco to Ulaanbaatar in the ’50s and ’60s — and a little bit of Peter Ustinov perhaps, and one or two other forgotten figures of the time, who all had fabulous lives you could never aspire to. Now everyone can get on an Air Asia flight with their tablet, and the world is a giant McDonalds. Which is probably the point of the campaign. The visual style is overwhelmingly from the post-war technicolour Euro-caper films, like To Catch a Thief and Topkapi. All in all, it’s a masterpiece, and a reminder that American advertising is one of the great arts of modernity. Now, in the final ad, the MIMITW is seen getting into the spaceship as part of the voluntary contingent to Mars. But of course! What else could he do? The whole series is on YouTube. If I were you, I wouldn’t watch it all at once. Stay thirsty, my friends. — Guy Rundle 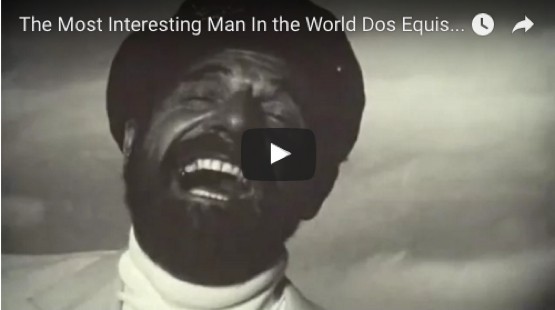 The most interesting man in the world ads are just cracking me up. Thanks. 🙂

Re the Brizzy Times / WAToday print issues, News have also been sporadically giving out free copies of a midweek edition of perthnow.com.au. Perthnow is theoretically tied to the WA Sunday Times paper, but this paper was a completely different thing. Could be a bit of brand positioning by News in view of the rumoured acquisition of the Sunday Times by WA Newspapers. Presumably News will hold onto the Perthnow website and the free midweek paper might have been trying to establish PN’s distinct brand as a metro focused publication. Anyways to the extent this is supposed to continue it’s not quite right to say News is no longer in the free paper business post-Mx.

Fairfax also did a one off print WA Today a couple of years ago as well so it’s not unprecedented.

Thanks Prefix, I didn’t know that.

Mistress not having a male counterpart? – how about Toyboy?