And don't get us started on that whore Nicki Minaj.

The New South Wales Parliament is holding a committee on the sexualisation of young people, and it’s brought Helen Lovejoys out of the woodwork. Won’t somebody please think of the minions?

Far be it from Crikey to stand in the way of anyone taking on the scourge of Minions (for those who have not been following along at home, the Minions are a tube-shaped servant race that first appeared in Despicable Me and now have their own feature film), but FamilyVoice Australia seems to think the yellow creatures are sexualising children:

“The 2015 film Minions features a minion in a G-string. Another scene features a minion getting smitten in a pool with two fire hydrants which look like minions and have pointy breast-like valves. A promotional poster even features a view of three minions naked from behind, looking at their overalls hanging on a clothes line.”

“In a scene in the film, one character says to another in relation to food: ‘If I don’t love it, I don’t swallow’ clearly a reference to oral sex.”

Even just the sight of a woman getting checked for cancer is too much for FamilyVoice:

“Channel Ten’s show Studio 10 recently featured naked breasts at 10am. That it took place in the context of a segment on breast self-examination is no defence. At this time of day many children are likely to be viewing and parents should not have to guard against them being exposed to nudity.”

Nicki Minaj is a problem:

“Nicky [sic] Minaj’s clip for the song Anaconda, a penis metaphor, features women twerking and gyrating and has close-up backside shots. The clip also features a coconut oozing milk, a metaphor for semen.” 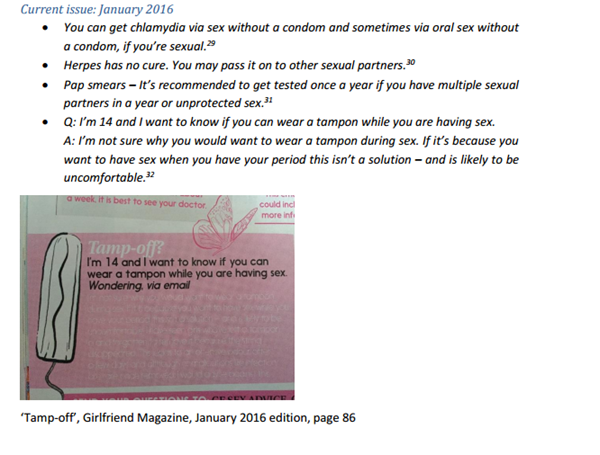 FamilyVoice complained that Dolly magazine had a sex guide on its website.

“In what other circumstances would children ever be advised that the ‘most important thing is that whatever you’re doing makes you feel good’? Such advice is irresponsible and encourages children to engage in risky sexual practices — at ages when this might be illegal.”

Nearly all of the submissions from religious groups called for mandatory internet filtering similar to that used in the United Kingdom.

Six federal Labor senators, including the soon-to-be retired Joe Bullock, as well as Jacinta Collins, Alex Gallacher, Chris Ketter, Deborah O’Neill, and Helen Polley, all called for a “default safe feed” on the internet. The former Labor government attempted for years to implement a mandatory internet filter, but it ultimately dumped the filter in exchange for the major ISPs blocking Interpol’s black list of child abuse websites.

The Coalition briefly toyed with the idea of an opt-out internet filter just days out from the 2013 election, with then-shadow parliamentary secretary for communications Paul Fletcher confirming the policy to technology website ZDNet, before then-shadow communications minister Malcolm Turnbull spectacularly backflipped on the policy hours later when he found out about it.

Crikey has confirmed that while the six senators might want a filter, it is not currently the policy of the Labor Party to bring back mandatory internet filtering.

Of course these groups wouldn’t let up on their pet topic. Despite already succeeding in getting the Safe Schools program reviewed and gutted, FamilyVoice, Australian Family Association and the Australian Christian Lobby also devoted several pages (or 76 in the case of AFA) to criticising the Safe Schools Coalition program, calling for it to be banned from New South Wales schools and defunded. The Australian Christian Lobby — using the most obscure language possible to make it clear that there should be protection for homophobes:

“There is nothing within the ‘All of Us’ program that seeks to teach respect, tolerance and inclusivity for those who may, for cultural or religious reasons, consider non-heterosexual expressions of sexuality unacceptable, or even for those who, for scientific reasons, consider transsexuality as a manifestation of the medical condition, gender dysphoria.”

FamilyVoice complained that teenagers confused about their sexuality should not be given advice:

“In Victoria, where the program was first developed, some high school students were told that they can find out if they are ‘gay’ by ‘trying it’. Government-funded programs should not encourage children to sexual activity, especially risky and harmful sexual practices.”

The Australian Family Association’s lengthy submission cited often debunked claims about Safe Schools and the links associated with the program. The submission had to be censored from the parliamentary website, and when Crikey obtained a copy of the submission, it was full of images of pornography taken from the Tool Shed website, which AFA had claimed was linked to Safe Schools. At one Wollongong school — a performing arts school no less — AFA claims that the “sexual agenda” was “forced on students” because year 10 and 12 students studied Billy Elliot and Bowling for Columbine. And because there are LGBTI posters in the school, and the school celebrates the anti-homophobia day Wear It Purple.

Thankfully, those of us who grew up with Bugs Bunny dressing up as a woman grew up perfectly well-adjusted.

I think all of the ‘dirt’ is in the minds of the grown-ups??!!
By comparison the kids seem to be relatively well adjusted.

Why do young things like Josh Taylor think it is clever to defend the sexualisation of children? I know its awfully clever to poke fun at the usual suspects like the Australian Christian lobby but it does your cause and your aspirations to one day be a grown-up journalist to side with child pornographers. And all jokes about bugs bunny aside (ref Comment 1 from Charles Miller – who looks a bit younger than the Bugs Bunny generation) that is precisely what we get from today’s Hollywood cartoons.

I’m sure young Josh Taylor and young Charles Miller are probably indignant about the kind of sexualisation of young girls we see in such things as Barbie dolls or the spectacle of girl beauty pageants of the kind most notorious in the US south but not unkown here. And rightly so! But somehow because the usual suspects attack Hollywood sexualisation of children through cartoons, it is something to minimise and to laugh at.

Taylor is right to expose and condemn language which tries to license homophobia. However, he shouldn’t then fall into the trap of defending child pornography – soft though it may be.

Similarly he does the rightful cause for greater social justice for gays no good by pretending that the Safe Schools Program did not promote some inappropriate content which the review into the program has had removed. Gay people more than anyone should be at the forefront condemning such aspects of these programs because they more than anyone else suffer when bigots can point to inappropriate material buried in the larger program.

Don’t get sucked into defending the indefensible just because you don’t like who is giving the message.

Clutch those pearls Edward! Please another couple of paragraphs on it all. Such innovation!

You may or may not be a troll, so just in case, I’ll say this.
It’s happening out there on the internet. Instead of getting blisters putting your hand and ears over every slight/pearl clutching moment kids can come up against, why not get them prepared, so they become mature enough to understand what is useful for them and what isnt. Or is that too empowering?

Love to hear how you deal with things with your own kids, and most importantly, once you no longer have them in your house under your guidance, how they navigate the 2010s/2020s world, not yours.

Oh, you know, you were probably a troll. Or Australian. They dont do parenting innovative-ly in Australia…

Tsk, more sexual inuendo, “The Coalition briefly toyed with…“, is there no escape…?
[email protected] – did you not realise that Bugs’ carrot munching was a deliberate metaphor advocating fellation and penophagy?
singed pp Oxenford who has retired prost(r)ate the the fainting couch.