The Oz brings you last week's news ... what's a Director of Transformation? ... Bob Katter gets the pins out ...

Front page story, last week’s news. It’s always interesting to see a front-page story in The Australian that isn’t splashed with a red-ink EXCLUSIVE. Today the paper covered the story of the now-deleted Twitter account of Muslim Navy officer Captain Mona Shindy. But why no red ink? Well, it’s because the story was first reported by Guardian Australia almost a week ago based on documents obtained under freedom of information. Old news is front-page news, it seems.

It’s even more striking given the headline on today’s edition of tedious column Cut&Paste: “If you don’t mind news nearly two weeks old, pick up The Australian Financial Review.” We’ll add a corollary: if you want news that’s only six days old, shell out $2.70 for The Australian.

Logos in the long grass. The stream of newly registered logos for political parties continues to be published in the daily newspapers, and Ms Tips may have found a new favourite after the Drug Law Reform party attempted to register this party logo:

It’s unclear whether they support the legalisation of marijuana, or if they want it to be available to the public at no cost, but we will now watch their vote closely. Other micro-parties have not been as creative — Ms Tips found the Jacqui Lambie Network logo uninspiring and Family First’s very unoriginal.

ANZ jobs to go? A tipster tells us that ANZ will be cutting 25% of its workforce in the coming weeks, just weeks after the bank announced that its bad debt costs for this year would be $100 million more than it expected in February. Fairfax reported at the time that it was understood that ANZ had loaned money to steelmaker Arrium, which went into administration today. We asked ANZ’s media team if they would comment on the rumour, and were told by a spokesperson that it was “completely unfounded”.

ABC transformation. Is ABC Radio getting a makeover? A tipster says:

“Curious timing with a new MD about to start, but ABC Radio boss Michael Mason has just announced an expensive new layer of senior jobs, with occult titles like ‘Director of Transformation’. The only thing that’s clear to radio staff is the sight of dwindling program-making $$$ going up in smoke.”

A Director of Transformation is an ominous title — we asked the ABC what it meant and a spokesman told us:

“ABC Radio has made some changes to its Radio Executive team, as part of a phased development to put in place an agile leadership team which can respond quickly to the changes in the media landscape.

“The division’s 2020 strategy has identified more than 30 major projects over the next 2-3 years which will position ABC Radio as a leader in the digital audio space, while deepening its connections with linear audiences on all its networks.

“The structure includes the role of Head of Strategy & Transformation, which recognises what has been an acting role until now.  The role will direct major cross-divisional projects for ABC Radio and will be responsible for its overall strategic direction.”

To vote for Danby, press 1. Voters in Michael Danby’s Melbourne Ports electorate received robopolls delivered by ReachTel last night, surveying their views on Danby’s decision to preference the Liberals. A local who received the call was asked how she would vote, who she would preference and if Danby’s decision to preference the Liberal Party over the Greens would affect her vote. The poll also asked if knowing about Danby’s stance on preferencing the Libs would be a vote-changer. The poll also asked whether Australia’s foreign policy in the Middle East would influence the way she voted. The issue of preferencing has become a rallying point for the Greens’ candidate Stephanie Hodgins-May, who is challenging Danby in the seat. She told Crikey‘s Josh Taylor this week the move by Danby was “a bit of a slap in the face to progressive voters”. So are the Greens behind the poll? Or is Labor working out how damaging the move would be?

Donate imperdiet doming id quod. Labor candidate for the seat of Higgins Carl Katter has launched his new website, but it seems to have been made public a bit prematurely. Featuring the standard photo of Katter with smiling constituents, the site looks half finished, with lorem ipsum — automatically generated text used in — still visible throughout. 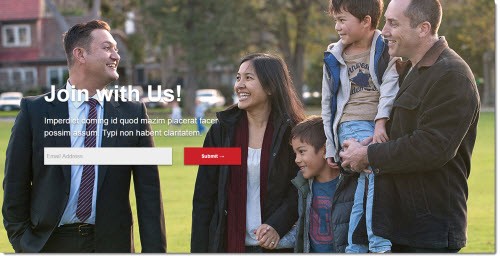 One element of Katter’s profile we found interesting is that it emphasises that he is the son of Bob Katter Sr, and lists his father’s years of birth and death, but there is no mention of other well-known relatives. Is that a move to distance himself from his half-brother, current MP Bob Katter Jr?

Trying times. Speaking of running away from Katters, Bob Jr seems he’s doing a good job of it himself, tweeting this photo today: 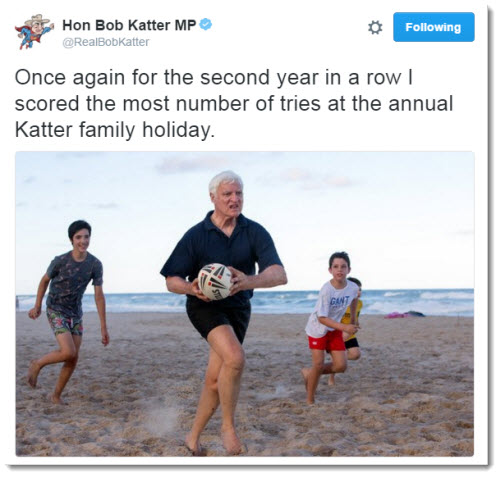 Before it’s too late shouldn’t Crikey register a dead St George with Rampant Dinosaur as their Logo?

Re: Director of Transformation. I truly hope ABC response was tongue in cheek – – – for if they were fair dinkum, we are really, really stuffed!

Whilst awaiting ‘moderation’ on ABC comment – – – it occurred to me that Lambie logo might be Tasmanian Tiger?