Buying the lede: when news and ad deals clash

The Prime Minister had some strong words for the banking sector yesterday. Not that you'd read about in the News Corp papers. Glenn Dyer and Myriam Robin report.

Well, this is awkward. Yesterday the Prime Minister had a go at the nation’s big banks, at the opportune venue of Westpac’s 199th birthday celebration lunch in Sydney. The former merchant banker said:

“The truth is that despite the public’s support offered at their time of need, our bankers have not always treated their customers as they should. Some, regrettably, as we know, have taken advantage of fellow Australians and the savings they have spent a lifetime accumulating.”

It’s big news for some papers. The Sydney Morning Herald and The Australian Financial Review gave it front-page prominence this morning, The Australian put it below the fold, but still on the front page. The Age has it on page 2.

The Daily Telegraph figured the story was sexy enough to feature in a poster in newsagents and newsstands. But what’ll you see on the front page? Well, this … 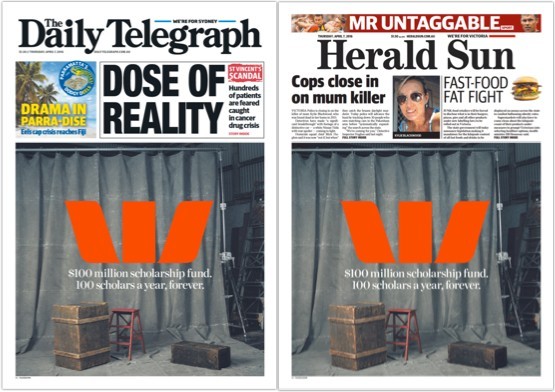 Today the Tele carries a four-page wrap-around ad for the big bank, as does the Herald Sun. And what did the Tele find most newsworthy about the lunch? Well, there’s also a page 4 story on it that trumpets Westpac’s investment in “the nation’s best and brightest”, complete with a complimentary quote down the bottom from the Prime Minister: “All business is about more than just a profit or a new product. It is about building opportunities for Australian customers and staff, making a greater contribution to our nation.”

As for the PM’s attack at the same lunch, that’s on page 48 in the Daily Tele and page 45 in the Herald Sun (both papers had the story leading their business sections). The Courier-Mail, which doesn’t appear to have carried the wrap-around ad, didn’t prominently report Turnbull’s comments either — an item in its business section quotes Westpac rejecting calls for a royal commission.

Only last week, we told you scribes at Fairfax regional were unhappy about foisting online betting advertising on communities they knew were harmed by it. In today’s revenue-challenged times, the queasiness caused by this kind of advertising is unlikely to abate.

This is rarely a problem for Crikey where cash ads rate far more highly than do accurate, important news items.

“Déjà view – cash for comment”?
Nice to see Westpac has so much to invest elsewhere (what’s the going rate for good PR?) and where do those readies come from?

The PM did not have a go at Big Banks. Banks are his backyard!

Focus upon real message which is: “Print Media” Their message is: Don’t look there; look over here!! Old Print Media is in lock step with Corporates. And you only have to read Bernard’s article today to see what that means.

It’s financially very important graybul for Bernard et al to pretend the “old print media” is less in the thrall of financial interest than Crikey is. In the same way it’s financially useful for Crikey to discourage subscribers attempting to improve their abilities to analyse arguments as opposed to being carried along by the effective emotive approaches used by Crikey.

Talk is cheap, Talcum. When are you actually going to do something?!!