Marriage Alliance and the Spam Act ... ACTU courts the young'uns ... what are they hiding in there? ...

Marriage Alliance co-opts Shorten. One of the many shadowy groups set up to campaign against marriage equality has used a statement by Bill Shorten to call for donations to their campaign. The Marriage Alliance, headed by former Liberal campaigner Sophie York, told its followers:

“This week, the debate on religious freedom in this country has taken a stunning turn for the worse.

“The Leader of the Labor Party, Bill Shorten, has just said unequivocally that, should a Liberal government introduce exemptions for businesses to refuse services for gay weddings, Labor would repeal them. Shorten said that under no circumstances would he allow for religious freedoms to be considered if the Marriage Act were to be redefined in Australia to include same-sex marriage.

But the email didn’t just go to their followers, with many people who had not signed up to receive emails from the Marriage Alliance finding it in their inboxes. Some on Twitter alleged that the email had been sent to people on the New South Wales branch of the Liberal Party’s database. Crikey emailed York to ask how the Marriage Alliance found email addresses for its database but didn’t hear back by deadline.

Kids these days, part one. Political campaigning has found a new frontier, with YouTube comedy channel Friendlyjordies releasing a video sponsored by the Australian Council of Trade Unions. The five-minute video encourages young people to enrol to vote in order to keep the Liberal Party out of power. Friendlyjordies is a popular YouTube channel created by Sydney comedian Jordan Shanks (ably assisted by a ragtag bunch of mates). While many of Shanks’ videos are Jackass-crossed-with-Monty-Python silly, many of his most popular have had a clear political lean to the left. Made in the Friendlyjordies’ trademark style, at the very end of the video it includes a disclaimer that the video was approved by Dave Oliver, secretary of the ACTU. It has already had more than 139,000 views on Facebook:

y U need 2 bug ur friends 2 enrol Be a champ and enrol online here! http://aec.gov.au/enrol/

Posted by Friendlyjordies on Monday, April 4, 2016

New policy from Turnbull? It’s only a little thing, but recent comments by pollster Gary Morgan got us thinking about different meanings of prorogation. On Monday evening, Roy Morgan issued a poll result accompanied by Gary Morgan’s usual analysis, which explained that an improved result for the LNP reflected well on the Prime Minister’s double dissolution ploy — “Turnbull ‘pro-rogued’ the Australian Parliament, including a reluctant Senate, to come back and sit for three weeks from mid-April,” said Morgan.

“Pro-rogue”? We wondered if this was a novel interpretation of the word to suggest that it showed Turnbull as favourable to mavericks, perhaps a rebel himself, a bloke in the great Aussie tradition of larrikins. Sadly, the intriguing hyphen has since vanished from the online copy, although the word remains, inexplicably, in quotes, as though it’s not quite a real word, despite being in the constitution.

It’s my party, and I’ll cry if I want to. Westpac has a grand soiree on in Sydney this afternoon to celebrate its bicentenary. It will be a rather difficult celebration after the bank was alleged by ASIC to have participated in rigging a key money market indicator rate (and there are a couple of choice transcripts of phone conversations that have raised eyebrows). But Westpac is not the Bank of NSW as it was established 199 years ago — it is a sort of very distant relative. Officially, the Bank of NSW started in 1817 and found it had a problem in 1821 with a serious loss that crippled the bank when it was discovered that the bank’s chief cashier had stolen half its subscribed capital, none of which was ever recovered. In 1974, in the credit crunch in the Whitlam years, the bank had problems with finding money as a credit squeeze gripped the markets — a point later acknowledged by former CEO Bob White. And in the early 1990s Westpac was rescued by what was then called the AMP Society, which took a 15% stake and provided much-needed cash after Westpac went on an unchecked property lending spree from it and its partly owned finance arm, AGC, with the two companies rarely telling each other who they were lending to. Without the AMP’s support, Westpac would have collapsed under the weight of these huge debts. That point of Westpac history is not acknowledged in its history, only that it had a record $1.6 billion loss in 1993. Prime Minister Malcolm Turnbull is speaking at the event, but we’re sure he will find a way to spin all that into the most exciting time to be a bank.

More ministerial diaries go walk-about. Crikey‘s latest attempt to get hold of a minister’s diary to see who our ministers have been meeting with has been thwarted yet again. We filed a freedom of information request for then-trade minister Andrew Robb’s diary late last year. Between then and now, Robb announced his retirement and acted as an envoy to get new Trade Minister Steve Ciobo ready for the role.

Naturally the office of the new minister — despite working with Robb during a transition period — is now claiming it doesn’t know anything about Robb’s diary and doesn’t have access to it. This is despite it being potentially in breach of the Archives Act for not retaining Commonwealth records. This, after Communications Minister Mitch Fifield’s office declared releasing his diary was not in the public interest. What are in all of these diaries that is so secret?

Dispatch from Mackellar. A tipster tells us:

“Marcus Blackmore hosted a drinks function for Bronwyn Bishop last Monday night so Bronny could unveil her campaign strategy. You’ve gotta admit it’s a novel sales pitch: It seems her losing the preselection would be a disaster for the oldies because it would leave only four parliamentarians over 65 in the house, so said the 73-year old. Reading that with her previously stated need to stay in parliament ‘to keep us all safe’ we now know Bronny will be campaigning to keep the oldies safe from terrorists … and 40-year olds to busy to look after the older generation. Nice one, Bronny.”

Kids these days, part two. A budding young reporter in the US has hit back at her critics, recording a video of herself reading the abusive and explicit comments she’s been sent online. Nine-year-old Hilde Kate Lysiak is the editor and publisher of Orange Street News, and last week beat the local paper to report on an alleged murder in her hometown of Selinsgrove in Pensylvania. When some thought she should get back to playing with dolls, she recorded this video: 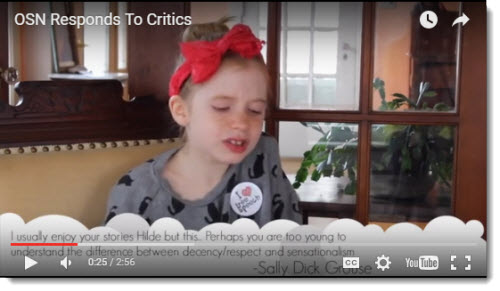 There was some interesting material here, so it’s a shame it was sandwiched between such thick slices of trivial nonsense.

The deal between AMP and Westpac in the early 1990s may not have helped Westpac. AMP had been involved in a banking venture which was not going according to plan. Westpac had got into life insurance- probably with middling success.
The deal was for Westpac to take over the AMP banking venture, and AMP to yake the Westpac life insurance operation.
The fullness of time suggests that AMP was by far the greatest beneficiary of the deal.
Westpac may have been technically insolvent in 1992, but was too big to be allowed to fail. It was allowed to trade its way out of the trouble.
Westpac was not the only bank to get into serious trouble through a finance subsidiary. Think of Bank of Adelaide, State Banks of Victoria and South Australia come to mind.

Oh, Sophie York of the Marriage Alliance… I feel your pain… I’m sure there are plenty of racist business owners who’d love to have the “freedom” to ban services to indigenous people, asians or muslims…. or whoever. They should have the “religious” freedom to put up “no blacks” signs in their shop windows.

You may attempt to dress up bigotry by calling it “religious freedom” but it is still bigotry, and harmful bigotry as well.

If, by some sick joke, businesses get the right to deny service to gay people, or people of various racial or religious groupings then they should be required by law to display a “no gays” sign in their window or website so that the community can avoid these places if they so desire. Perhaps Sophie York is unaware that most people have at least one gay family member and may boycott such bigotted businesses even if they’re planning a “straight” wedding.