The many faces (and email addresses) of Clive Palmer.

The email address Clive Palmer was allegedly using to sign off on expenses for Queensland Nickel under the nom de plume Terry Smith was also used in negotiations with Environment Minister Greg Hunt.

Palmer said after he was elected that he had retired from running Queensland Nickel, but admitted in January that he continued to sign off on company purchases using an email “pilbera@yahoo.com” under the alias Terry Smith. He denied claims he was using the email address and alias to covertly run the company, which is now in administration.

However, it appears Palmer was also using the email for his parliamentary business, despite having access to the email addresses on offer to him as a member of Parliament. An email obtained by Crikey under freedom of information law from the Treasury Department reveals that Hunt’s office had emailed Palmer using the Terry Smith email address in July 2014, just days before Palmer agreed to pass the repeal of the carbon tax legislation. 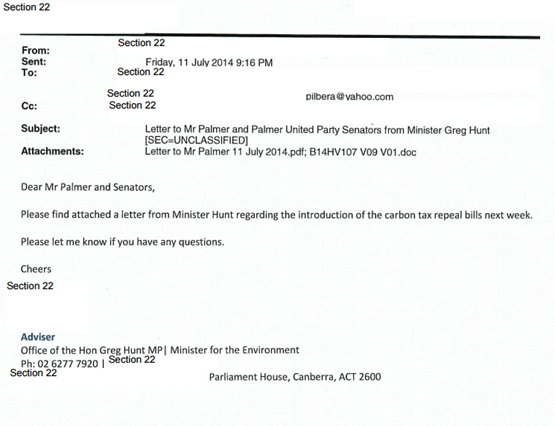 The email includes Hunt’s letter to Palmer and the Palmer United Party senators (when there was more than one) on the amendments to the legislation the government had agreed to, and outlined how the legislation would be passed. Hunt ends telling Palmer:

“I’m sure we both agree that the sooner the carbon tax is removed, the better for all Australians.”

The legislation passed the House of Representatives on July 14, 2014, and passed the Senate on July 17. A spokesperson for the Environment Minister told Crikey that it was the email address his office had been asked to use.

“It was the address provided to us and we were requested to use it for correspondence. The correspondence is still open to the normal FOI application process. The entire negotiation was public — with draft and final legislation being made public.”

Despite Palmer’s claim he uses multiple email addresses, he seems to use this one frequently — Crikey revealed last week that Palmer also used it to register an online educational website domain.

Surprise, surprise, the Clivosaurus is a lying, bloviating blimp. He didn’t even supply the correct, or real, telephone number of the registration form shown last week in Crikey.
Is anyone dumb enough to run a book on him winning Fairfax, or even standing?

One of the significant benefits of the next election, irrespective of who wins government, will be the demise of Clive and all this foolishness.

And guess who was a beneficiary of voting out the carbon tax? Not the Aust people or the budget that’s for sure.

An even more interesting question is who would have been the beneficiary of voting IN the carbon tax? Not anyone who was hoping it might make a jot of difference to the weather, that’s for sure.

And any person with some smarts would know that yahoo, hotmail and gmail addresses are only credible as for individuals/joe public/anonymous correspondence.