Best of frenemies. Former New Zealand prime minister Helen Clark has shown her hand, announcing that she will apply for the role of secretary general of the United Nations. Clark’s credentials mean she is a serious contender for the top job after being head of the United Nations Development Program for seven years. It is well known that the UN is looking favourably on female candidates for the eighth person to fill the chair, as the last seven secretaries general have all been men. By United Nations custom though, it is expected that the candidate will come from an Eastern European state, based on regional cycles. Although former Australian prime minister Kevin Rudd hasn’t officially announced that he wants the job, everything that he has said behind closed doors reveals his intentions. Foreign Minister Julie Bishop has told reporters that she knows that Rudd has been expressing his interest to world leaders, but she didn’t talk up his chances. We’ve previously reported that Rudd is positioning himself as a “compromise candidate” if the security council can’t agree on a candidate from an Eastern European nation. This morning he tweeted that Clark would make a good candidate, and that he wished her well — carefully chosen words: 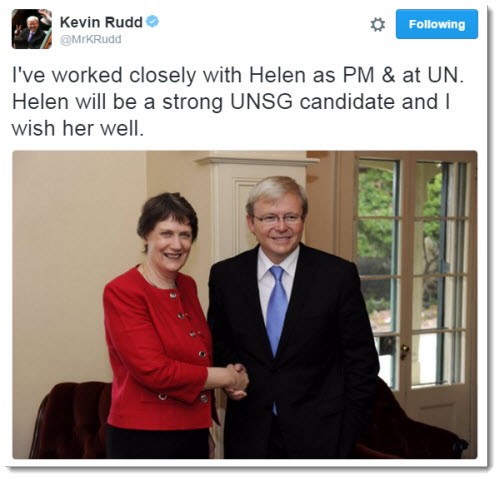 A high-level source inside the UN building in New York tells us that Rudd’s chances aren’t good:

“There is the understanding that ultimately it must be the right person for the job (again you’d have to question Rudd’s qualifications??) And finally his name does not come up in the many discussions on the subject in the corridors of the UN except perhaps occasionally in embarrassed whispers between two Aussies.”

Dear Diary … Newbie Senator James Paterson has written a diary of his first week in Parliament for the Australian edition of The Spectator. And, as you’d expect, the 28-year-old Victorian represented his constituency of the Institute of Public Affairs very well. He found a friend across the aisle in Joe Bullock, and by the end of the week was celebrating that his bestie Tim Wilson would soon be joining him in Canberra:

“One of the warmest congratulations for my maiden speech comes from retiring West Australian Labor Senator Joe Bullock. Crossing the chamber to shake my hand after the speech, he says ‘I liked what you had to say about free speech, education and Israel — but I think I would argue with you on some of the other things.’ Sadly, I fear it will be some time before Labor chooses someone of his values and conviction again.”

“The week ends with very welcome news: my friend, former colleague at the IPA, and Speccie Diarist Tim Wilson, has been preselected by the Liberal Party to replace Andrew Robb in the safe seat of Goldstein, in Melbourne’s bayside. I’m looking forward to welcoming him to Canberra after the election. Tim is our generation’s most articulate advocate for liberalism, and has a very bright future ahead. I suspect we’ll have no shortage of issues to work on together.”

He didn’t mention if there were any bullies, except those at the ABC, and the whole thing made us miss @Rudd2000. The full piece is here.

Looks familiar. While Kevin Andrews says he’s ready to challenge Malcolm Turnbull for leadership of the Liberal Party if the situation requires it, he might want to hold his horses — Turnbull’s mug is everywhere across Victorian Liberals’ election paraphernalia, and it would cost a fortune to stick Andrews’ face there instead. Many Victorian candidates have been seen at events with sandwich boards featuring Turnbull’s smiling face, with the candidate photoshopped in on his left. The candidate for Melbourne Ports, Owen Guest, has even put the image on a billboard. 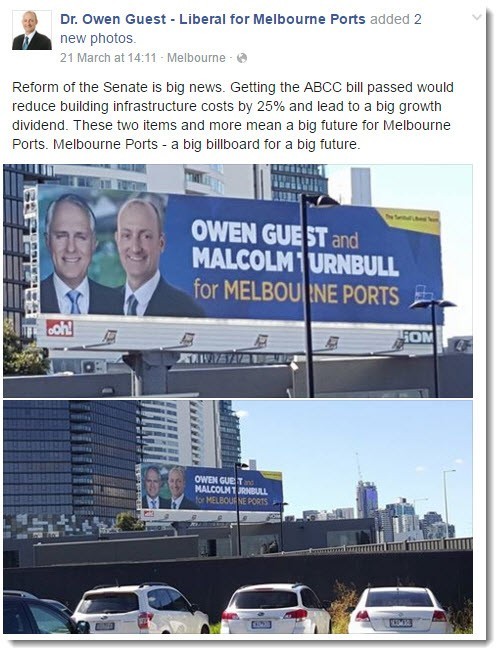 Just six months ago, Tony Abbott’s name and face were nowhere to be seen on the material handed out before the Canning byelection. It was a good move on candidate and now MP Andrew Hastie’s part, as Abbott was rolled by Turnbull just five days before the poll.

Julie Bishop inspo. How do young women see Foreign Affairs Minister Julie Bishop? Intimidating but friendly, according to a profile published by puff-inspiration website The Footnotes today. The site is aimed at young women starting their careers, and the interview focused on Bishop’s work:

“Bishop was awarded the power to head the Foreign Affairs portfolio just over two years ago, and the enormity of that power and duty make it hard not to be intimidated and equally fascinated by her portfolio, but more – with the woman behind the role.

“She’s passionate about travel, a runner, a fashion icon and the first female to land the role in Australia’s history, but never mind that. Julie Bishop is focused on her job. And she’s been dubbed the most eloquent yet fiercely intelligent member of the Liberal cabinet.”

The Footnotes, which tells Crikey it’s an independent website that has been around for about two years, tried to drum up some exposure for the interview, which was due to go live yesterday. It was delayed until today because Bishop’s office had to approve the video that went along with the profile.

Donald Trump? Yeah Yeah! Australian cricketer Shane Warne has a bit of time on his hands since his charity was closed down amid controversy, but that doesn’t mean he has stopped wanting to help those less fortunate. In the early hours of this morning Warney posted this photo to Instagram, supposedly displaying what Donald Trump would look like if he popped into Advanced Hair Studio for some work. We think it basically just looks like Warney’s hair on Trump’s head, but it’s still disturbing:

Rundle: Freedom Boy tries, fails to save the day on 18C

Good news on this site for once with the Report isn’t likely to be given the opportunity to do as much damage at the U.N. as he’s managed to achieve here in Australia.

Helen Clark would be an excellent choice, as would the former President of Ireland, Mary Robinson.
But Krudd? I doubt that the world is a big enough canvass for his ego.