There is one budget measure that doesn't cost the government much, doesn't give much to small business or the taxpayer, and guarantees a media love-in.

The budget is coming. Most people don’t try to predict what will be in it. It’s hard to know what trade-offs the government will make — and the leaks will start soon anyway.

This year, budget predictions are especially hard to make. The last two budgets don’t provide much in the way of salutary lessons for freshman Treasurer Scott Morrison. The legacy of Joe Hockey is mostly in pointing out where the landmines are.

In this pockmarked fiscal landscape there is one gleaming treasure, however — one thing Hockey did that worked for him, one thing that seems extremely likely to be repeated: the curious case of the $20,000 small business instant tax write-off.

I’d nearly forgotten about it, until just last week someone seriously suggested I use the “free money” from the government to buy something for my small freelance writing business.

Here’s the thing about the “free money”: it isn’t free, and it isn’t really money. It’s just a change in the timing about when you can make a tax deduction.

At the time, I calculated the actual value of the $20,000 accelerated write-off as about $1000 to the average business.

Another calculation said for some businesses the $20,000 write-off might actually be worth less than zero; it might actually cost them to take the tax deduction all at once.

But although it was a lot of hot air, this announcement dominated the early coverage of the last budget.

The reason it got so much positive press is because the tax system is complex. Few people understand it. This is sometimes true of political journalists and often true of the TV presenters on the morning shows, etc, who lavished the write-off with so much attention.

Last year’s budget included a big package of items for small business. There was $1.8 billion for unincorporated businesses and $1.45 billion for companies that was largely ignored forgotten. The tax write-off cost $1.75 billion and got 99% of the attention. It was, in a PR sense, the best-value part of the budget.

Treasurers may come and go, but lessons like that last a lifetime. No minister would pass up an opportunity for more great press. “Same again, please” will be the instruction issued from the Treasurer’s office to the Treasury, “but bigger”.

It doesn’t matter too much. It is very unlikely to be the economic stimulus the Treasurer hopes.

Capital investment data from the last year shows that there was a small bump in capital expenditure in manufacturing just after the budget. But in the much larger category of “other industries” there was, at that exact time, a slump. 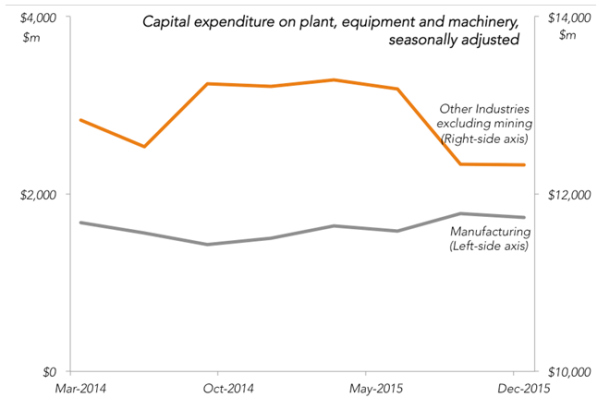 Of course, the slump may have been bigger still without the write-off, we will never know. But if the measure of success was to make these other industries invest more to compensate for the rapid descent of capital expenditure in mining (not on the graph but it’s a plunge), it hasn’t worked.

That’s unlikely to stop the write-off being wheeled out again though. At least this time, forewarned, we can avoid being sucked in. That might prevent it showing up yet again in next year’s budget.

It would be nice in light of Crikey’s abysmal record re economic analyses if the Commissariat for once could turn out to be right on something.

So what don’t you agree with in this article? Specifically.

Norman doesn’t actually disagree with anything in the article. He’s simply selected a couple of key terms e.g. ‘economic’ and ‘analyses’, then inserted them into a phrase designed to be vaguely insulting to Crikey’s writers and readers.

Presumably he obtains some validation from the exercise.

I suggest that if you re-read my comment I didn’t actually disagree with anything they wrote in THIS article, Wayne Cusick.
If you wish to tell me any of my analyses on previous occasions that you deem unfair, I’d be pleased to respond.
Crikey doesn’t like contrarian positions re any of the Commissariat’s causes, which is why they made a generous offer some time back in return for me not embarrassing them with Posts that pointed out where their political prejudices were leading them.
I look forward to receiving your response (as soon as the Crikey Commissariat Censor releases Post#3).

Norman doesn’t actually disagree with anything in the article. He’s simply selected a couple of key terms e.g. ‘economic’ and ‘analyses’, then inserted them into a phrase designed to be vaguely insulting to Crikey’s writers and readers.

I remain unconvinced Norman is not just a modified version of ELIZA.