How many journos could go from the ABC? Plus other media tidbits of the day.

What $20 million gets you. Last month Crikey asked the ABC how many journalists it would have to fire if its $20 million-a-year “enhanced news-gathering” grant, delivered for three years in 2013, was’t renewed in this year’s budget. The ABC wasn’t willing to put a number on it, saying contingency plans for the grant not being renewed were still being worked out. But in an answer to a Senate estimates question on notice, the body said 106 people were employed with the funding in the 2016 financial year.

Of the 106 people, 42 of these are in NSW, 35 in Queensland and 10 in Victoria, with smaller numbers in the other states and territories. More than half the people are employed are outside of Sydney or Melbourne.

“Of these, 11 are new positions for journalists and video crews in Bunbury, Renmark, Newcastle, Wollongong, Broome, Alice Springs, Geelong, Ipswich and Gosford.

“Eight positions support live video linking capacity around the country which is often used to bring regional stories to state capitals, and supports regional coverage of stories such as natural disasters.

“Another 41 positions, based in state capitals, produce regional and state-based reporting and state-based news specials. This includes 13 digital positions based in Brisbane dedicated to sub-editing and producing regional content for ABC News Digital.

“The monies also support seven members of the National Reporting Team based outside of Sydney.

“Of the remaining 46 positions, 36 are based in Sydney working primarily for the National Reporting Team and ABC Fact Check; as well as Four Corners, Foreign Correspondent, Australian Story and NewsRadio programming extensions; three are based in the Western Sydney bureau at Parramatta and seven are in the Interactive Digital Story Telling Team located in Brisbane.”

Correction of the day. Hello! takes it all back … 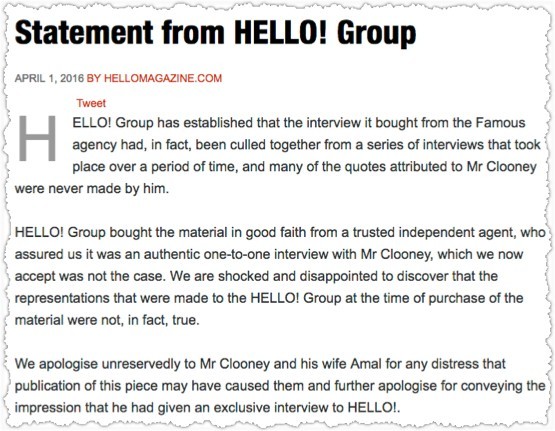 Meanwhile, this correction isn’t as fun, but we thought we should include it anyway.

The Sydney Morning Herald this morning carries a “clarification” saying an article on March 29 was “not intending to suggest [Liberal politician] Angus Taylor sought a donation from a banned developer”.

Taylor issued a statement saying he “welcomed the apology and retraction today from Fairfax papers”.

“I understand relevant articles have been or are being withdrawn from publication and I thank Fairfax for this.”

The article Taylor complained about is still up, though the clarification has been added to the bottom. — Myriam Robin

Bad news for Nine. Nine Entertainment shares were crunched 20% this morning after the country’s No. 2 TV network revealed a sharp fall in March quarter revenues and an implicit warning about the 2015-16 profit.

In a surprise announcement to the ASX, Nine blamed a “subdued” advertising market in March and finally owned up to its weak ratings effort. Shares plunged to a low of $1.15 before recovering to trade around $1.21 at 10.45am — down 20.4%. Shares in rival Seven West media, which has dominated the ratings so far this year, crushing Nine, dipped 2.2% to 97.7 cents. Shares in Ten fell 0.8% to 98.7 cents (which is equal to 9.87 cents before last year’s share consolidation).

The news is an admission that Nine has stuffed the 2016 ratings battle, which exposed it to the still slowing TV ad market. It means this year in ratings is a write-off, as is the financial result, which will fall for a second year in a row. The focus is on cost cutting, as Nine told the ASX this morning:

“The advertising market in the March quarter remained subdued. Nine’s ratings during the period were softer than anticipated, which has impacted FTA revenue share. In particular, Nine’s Summer of Cricket was adversely impacted both by the weather and the standard of the competition, with c30% of scheduled play days lost.

“For the quarter, Nine’s Television revenues were down c11%, against Q3 FY15. This was also impacted by the earlier timing of Easter this year and the absence of the Cricket World Cup event.

As Crikey noted yesterday, the ICIJ’s head is Gerard Ryle, a multiple Walkley winner who built his reputation at Fairfax. In fact, half the ICIJ’s six-person Washington DC newsroom has some connection to Australia. Hamish Boland-Rudder is formerly of the Canberra Times, and Will Fitzgibbon joined the ICIJ on a fellowship while he was at the (now defunct) Global Mail. The Global Mail, Australia’s so far only experiment in philanthropically funded journalism — unless you count the contributions of the long-suffering shareholders of media companies — was funded by Graeme Wood, who is also a major donor to the ICIJ. He had the idea the ICIJ could serve as a training ground for Global Mail journos, Ryle told Crikey yesterday. When The Global Mail folded, the ICIJ hired Fitzgibbon permanently. — Myriam Robin

How the mighty have fallen. Time Inc has discussed a joint bid with private equity for Yahoo’s original business — its core internet operations, at least according to reports on the weekend. Time Inc has a market value of just US$1.6 billion, which makes the bid very ambition. Yahoo is worth more than US$34 billion, but Yahoo’s internet operations could be worth US$4 billion, which would still be well beyond Time’s resources. First-round bids that are due next Monday, April 11. Private equity reportedly interested include Blackstone Group LP, KKR & Co, TPG Capital, Apax Partners, Warburg Pincus, Bain Capital and Hellman & Friedman.

A few years ago this story would have been unthinkable. Time Inc, the magazine publisher, would not have been thinking of bidding for Yahoo — with the support of unnamed private equity groups and their deep pockets. Firstly, Yahoo would have been too big, and second, Time Inc was still a part of Time Warner and the integrated media group. But as Facebook and Google steal more and more of Time and Yahoo’s revenues, times have changed.

Time has been looking to increase its digital presence, but the battle is hard. In 2015, Time Inc’s revenue fell 5% to US$3.1 billion last year, with print and advertising revenue falling 10% to US$1.32 billion. Digital advertising revenues were up 11% to US$221 million last year. The most favoured buyer of Yahoo’s assets is US telco Verizon, which last year bought AOL and just over US$4 billion and has been expanding into the online space as well. It has deeper pockets than Time Inc. — Glenn Dyer

Video of the day. Some 3AW, but no 2GB? Media Watch dissects Turnbull’s media choices, and asks, can he afford to ignore Alan Jones? 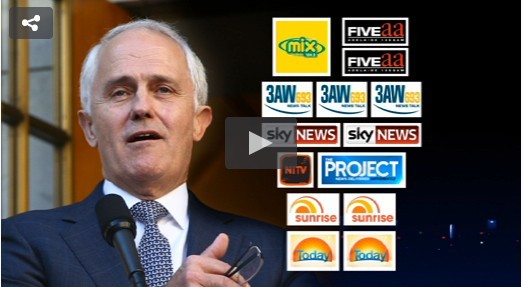 Among the ABC employees reported as being sacked, surely there are one or two competent journalists who would give Crikey the lift it obviously needs?

One doesn’t expectgood prose from the likes of Hello but one might think that they could afford a dictionary and someone who knew how to use one – “it… had been culled together..”. Perhaps they meant “cobbled together”.
It’s not like the coincidental homophone ‘cleave’ meaning both ‘to separate’ and ‘join together’ but having different etymologies.