Australians want an end to the taxation exemption enjoyed by church, this week's Essential Report shows.

Australians strongly support ending the tax-exempt status of religious organisations, according to today’s Essential Report, while the major parties remain locked at 50-50 on voting intention.

Nearly two-thirds of voters oppose the religious tax exemption, while just 24% support it. The strongest opposition, unexpectedly, comes from older voters: 73% of over-55s oppose the exemption. 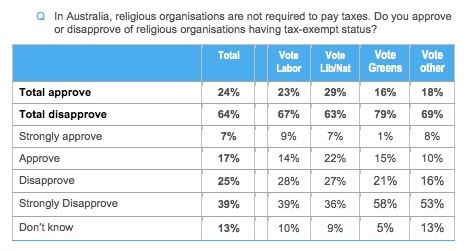 There’s a very high level of “strong disapproval” across all voting groups on the question, and a low “don’t know” response, indicating views are heartfelt, even among conservative voters.

However, voters are evenly split over Malcolm Turnbull’s failed proposal for a state income tax, which was launched last week ahead of Friday’s Council of Australian Governments and then sank without trace. Voters split 34% approving and disapproving of the proposal, with 31% saying they didn’t know. And while Labor voters are more hostile and Coalition voters more approving and less likely to say they don’t know, the gaps aren’t enormous. Greens voters appear confused by the idea, splitting 32% approval/38% disapproval/31% don’t know.

That’s a very different outcome from Newspoll’s question on the subject today, which elicited 58% opposition to 19% support, but the difference reflects the question asked and is a good example of how nuances around a question can dramatically alter results. Essential asked It has been proposed that the states and territories be allowed to charge some form of income tax to be used to fund services like health and education. It would mean Federal income tax rates would be reduced. Would you support or oppose this proposal?

Unlike Newspoll, Essential doesn’t identify the source of the proposal, which minimises the skewing effect of voting intention — when voters know which side of politics has put forward an idea, they tend to react more based on their voting intention than when they don’t. But that’s overwhelmed by the fact that Newspoll’s question also refers to state income tax in addition to existing taxes, whereas Essential notes that federal taxes would be reduced, and also notes the link with health and education, which voters tend to always want more spending on. In short, Newspoll portrays the proposal in a way less appealing to voters, even if it’s not less accurate.

And shadow treasurer Chris Bowen, who has performed strongly in recent months, is gaining on Treasurer Scott Morrison: 26% of voters trust Morrison to handle the economy compared to 23% who trust Bowen; that compares to 26%-19% in January and 27%-18% in November. But 51% say they don’t know, suggesting that neither politician is cutting through with most voters.

As I understand it, Essential asks their polling questions from a static ‘pool’ of voters, choosing a sample each week.
Newspoll takes their sample from the general public each fortnight. This seems more likely to demonstrate change over-all, IMHO.
In any case, recent polling does not look good for the government…thank goodness!!

The proportion (virtually identical across the parties) who want the religious to lose their tax exemption is similar to those in favour of equal marriage – when will the pollies shirk that issue as well?
Add the question to that damned plebiscite!

I am not sure why Bernard is surprised that older voters oppose the exemption. An assumption of sclerotic brains in those over 55? An assumption that they are more religious? Perhaps it is their accumulated knowledge and experience and wisdom that make them the strongest opponents

I would avoid any religious group like the plague who receives tax exemption status. This means they are doing something wrong in accordance with their state sponsorship.

The true believers are a “little flock” not a corrupt gigantic monolithic institution. Come out of her my people.

Their charitable work should be tax deductible, just like my donations to charities. But running a shop, nursing home, retirement village or child care is not charitable. Those activities are competing on the open market, and they have huge benefits that their competition do not. Coles & Woolies can’t use their market power in that way yet this mob can.

Not only that, if they continue to discriminate against portions of the population they should be charged, not rewarded by my taxes.