Trouble in paradise? Dumped Defence Minister Kevin Andrews is here to help — just ask him. In an interview with his local paper, the Manningham Leader, Andrews says that he is prepared to challenge Malcolm Turnbull for leadership of the Liberal Party under the right circumstances. In a long profile to mark Andrews’ 25th year in Parliament, he also said he was a leader of the conservative side of the Liberals:

“‘It has never been my burning ambition to be the leader of the party, but if circumstances arose which they did in both of those instances where I thought there should be a change or a contest, I am prepared to do it,’ he said.

Mr Andrews said it was ‘true’ he was a leader of the conservative side of the Liberal party.

‘But I see that leadership as a kind of intellectual leadership,’ he said.”

We think he might have a bit of competition there. Last year Eric Abetz told another local paper, The Advocate, that he was the standard-bearer for conservatives — “the informal leader of the conservative element of the Liberal Party”. Perhaps it’s time for a conservative spill?

Vote 1 beards. The marathon sitting of the Senate last month delivered us voting reforms that are designed to end preference whispering, but they also delivered the ability for political parties to register a logo to be featured on the ballot paper next to their party name. The first of these logos appeared in the daily papers today, and Ms Tips already has a favourite. The Australian Motoring Enthusiast Party has registered a logo featuring a cartoon of their one and only senator, Ricky Muir.

Ms Tips has previously heard that Muir was considering starting his own party, along the lines of his Senate colleagues Jacqui Lambie and Glenn Lazarus. Now it looks like the Australian Motoring Enthusiasts are just a vehicle for Muir’s mug. While the Liberals have gone for their standard logo, we think the Australian Renewable Party’s smiling sun could be a vote winner. The Sustainable Population Party has used the chance to put an actual policy on the ballot paper, with their logo just reading “lower immigration”. We’ll keep an eye on what other logos will be applied for — will we see a ballot paper with lots of tiny cartoon faces?

Who will replace Stone? Since Victorian Liberal MP Sharman Stone announced she wouldn’t be contesting the seat of Murray at the next election, locals have been wondering what kind of race they will face without her. A tipster tells us that “bizarre rumours are flying around Liberal circles” about who will replace Stone on the ballot paper. Says our tipster:

“Word is that local Libs are considering asking back 2013 Liberal candidate for neighbouring Mallee, Chris Crewther, for yet another Lib-Nat contest. Crewther comes from nearby Horsham, but faces the logistical problem of having just recently moved to Frankston to pursue Bruce Billson’s Dunkley.”

That seems very unlikely to us, with Crewther well and truly on the hustings down in Melbourne’s south-east — by the look  of his Facebook page, no local event is complete without him. There are already a few Liberals who have confirmed they will stand for preselection before the deadline to declare by the end of today. Andrew Bragg, who had already nominated for preselection for the Senate in NSW, confirmed that he had put his name forward, and former Ted Baillieu staffer Duncan McGauchie and Campaspe councillor Emma Bradbury have also confirmed.

While preselection for the Nats is yet to conclude, there is already a high-profile candidate who has put his name in the ring. Our tipster says local Libs are cautious about Damian Drum, who has quit the Victorian Legisative Council to run for the Nats in the seat. Drum grew up in Shepparton and played AFL for Geelong and coached Fremantle for two years. Our tipster says Shepparton-based lawyer Steve Merrylees is the favourite for the Liberals’ preselection, but Merrylees hasn’t confirmed he is running. In 2014 voters of the state electorate of Shepparton, which is included in the electorate of Murray, booted out Nationals MP Greg Barr with a 32.5% swing to independent candidate Suzanna Sheed.

Joe Hockey cricket. Former treasurer Joe Hockey is living it up in the US — managing to find a way to play a match of cricket: 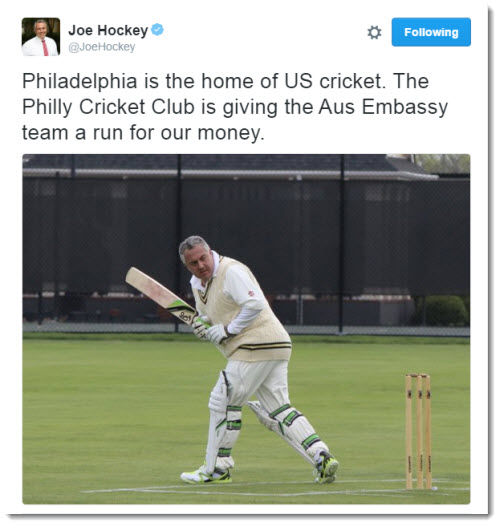 Alibaba on its way? The Chinese e-commerce giant (as opposed to the kebab shop) looks set to launch its operations in Australia this year. Although the service has been available in Australia since 2014 with its online payments firm opening an office in Australia at the time, Crikey understands the company has recently recruited staff in marketing to establish an Australian arm for the Alibaba group.

Betoota Advocate gets the scoop. The Betoota Advocate is an Australian satirical news site that has been known to catch out many news outlets with its catchy headlines that are just a bit too off to be true. Now the site has released a preview video of an interviews with Deputy Prime Minister Barnaby Joyce and his independent challenger Tony Windsor. It looks like the boys from Betoota had a few beers with Joyce — now we’re waiting in anticipation for the full interview: 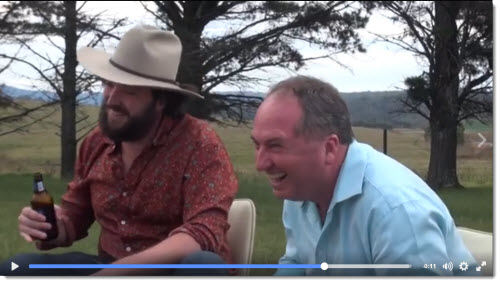 The Libs are far from finished with Turnbull

The problem of having a surplus of talent in Coalition ranks isn’t one The Greens, Labor, Independents or the Union Movement has to face.

Andrews or Abetz making leader would be akin to electing the Liberal version of Corbyn. No. They wouldn’t be that stupid.

Borey Carnadi won’t be pleased by the claims of that pair of putative “leaders” – perhaps he’ll flounce off to his recently registered Australian Conservatives?
I thought the mention on the radio this morning of Kevin “Andrews” Android challenging was a late April Fools Day joke.
Please let it it be true.

Yeh, imagine a party electing the likes of an Abetz, an Andrews, a Bernardi, a Christensen or an Abbott to lead it? That would be a mad monk’s Tea Party.