Essential: state governments all lead but Xenophon’s on the march

State governments continue to cruise in state-level polling released today by Essential Report, with incumbents retaining handy leads in the mainland states in polling across the three months to March.

In NSW, the Baird government retains a massive 56%-44% two-party preferred lead over the hapless Labor opposition, and that lead actually strengthened to 57%-43% in the month of March, off a Coalition primary vote of 49% to Labor’s 33%. The sample size was over 1000 for March and over 3000 for the three-month period. The NSW Greens have remained steady on 10%.

In Queensland, the government of Annastacia Palaszczuk is equal with the LNP on 40% but leads on two-party preferred, 52%-48%, off a three-month sample of just under 1900. The Queensland Greens are on 9%; Labor improved on its primary vote in March to move to a 53%-47% lead, but the one-month sample size is only 700. The Katter Party is on 2%, and Clive Palmer’s Palmer United Party isn’t troubling the scorers currently.

In South Australia, the arrival of Nick Xenophon’s party shook up polling, but has not so far undermined the position of the Weatherill government. 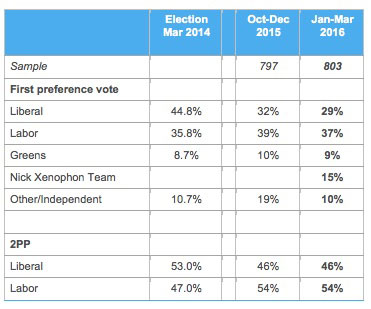 Xenophon’s strong support — 15% — is drawn from an already high “other” vote, but it also coincides with a drop in support for both major parties (and perhaps even the Greens). However, that still leaves Labor handily ahead 54%-46% on a sample of around 800, based on its strong primary vote lead over the Liberals, who are on just 29%. Nonetheless, those sort of numbers if translated to the federal context mean Xenophon is very well placed to pick up two Senate spots in South Australia in the event of a double dissolution and have a part of a quota left over.

In Western Australia, the Barnett government was ahead of Labor in the January-March period, extending its primary vote lead to 40%-34%, while the Greens are performing solidly on 12%, for a two-party preferred outcome of 52%-48% from a sample of 930; the outcome is up from 51%-49% at the end of last year.

Cool numbers, but gee if only Tasmania was part of Australia.

Xenophon is always “on the march” in pursuit of his personal ambitions.

Can’t help but think you have got WA wrong.Barnett is well and truly on the nose and would suggest 50/50 at best.

Why does all poll reporting aggregate the Libs and Nats under ‘Coalition’ when in reality the Coalition is reformed at various times and sometimes not at all as in Victoria a few years ago. Surely the correct reporting is to show the Lib vote and the Nat vote separately (as is done with the ALP and the Greens) and then to show the two party preferred as Coalition (or LNP) and ALP? The first preference votes would then correctly show the size of the respective parties, instead of the skew at present that really shows the Coalition first preference as pretty much a TPP.