Malcolm Turnbull's proposal for state income taxes has come to a screeching halt 48 hours after it emerged. And that's the best case scenario for the Prime Minister.

Whoever leaked Malcolm Turnbull’s “bold” (aka brave, in the timeless Yes, Minister sense) proposal for giving income tax powers back to the states has engineered a disastrous outcome for the Prime Minister after today’s Council of Australian Governments meeting told him, in short, to go shove his income tax.

The news emerged on Wednesday that the government was considering proposing to the states and territories that they would be able to levy their own income tax, with the Commonwealth initially offsetting its own revenue by a fixed amount in exchange for getting rid of Commonwealth education and health grants to the states.

Late on Wednesday morning, after Treasurer Scott Morrison had fended off questions about the idea with vague non-committals, Turnbull used an event in western Sydney to formally announce he would be putting it to premiers and chief ministers. The government then spent the time between that announcement and the beginning of this morning’s COAG meeting tripping over itself on the detail. That Morrison didn’t appear to know the extent of the proposal even after Turnbull had announced it, or that Turnbull didn’t spot the trap that rapidly opened up on school funding, suggests that Turnbull wasn’t lying when he said that he’d resorted to announcing it because it had already emerged in the media.

At today’s meeting, Turnbull only had the support of one first minister, Colin Barnett of Western Australia, who on his way in casually noted that yes, if he had an income tax that he could raise, he’d be raising it, and so would other states.

The rest were either unhappy or outright hostile to the idea, for varying reasons. But regardless of their individual rationales, that ensured Turnbull emerged from the meeting this afternoon with no consensus to even go on “considering” the idea. The states were only interested in considering splitting off a chunk of income tax revenue for themselves — something South Australia’s Jay Weatherill had proposed last year, to address the problem at the centre of all this — the fact that the Commonwealth and the states and territories are $80 billion apart on health and education funding.

Final result — yet another tax reform proposal is “off the table”. The GST rise took months to be killed off. Income tax cuts took weeks. Fixing negative gearing “excesses” took days. This one has been nixed in barely 48 hours. One can barely move in Canberra at the moment without getting hit by an ambitious tax idea crashing to earth.

At the ritual post-COAG press conference this afternoon, Turnbull declared that the proposal was “withdrawn”, indeed, it was no longer even a “proposal” — “there will be no state levying of income tax”.

Except that Turnbull just announced he wanted to do it two days before. Labor, which opposed the idea from the get-go in the harshest terms, is unlikely to let any voter go to the polls later this year under the impression that the idea of “double taxation” and “abandoning public schools” isn’t part of Turnbull’s long-term plan. Labor has already run one successful scare campaign against Turnbull, which helped force him to abandon a GST increase. Watch now as Labor endlessly recycles Tony Abbott’s line about “double taxation” and accuses Turnbull, the old Sydney Grammar alumnus, of wanting to abandon public schools.

Not that it’s entirely a policy problem for Turnbull, of course — he still has to pretend he has a strong working relationship with Scott Morrison, who might just be quietly chuffed at the outcome from COAG on tax. Remarkably — like the leaking of the story of how Morrison spent Easter Monday at Malcolm Turnbull’s place at Point Piper discussing tax — this afternoon Turnbull’s office called a “PICFAC” media alert, in which press photographers get a chance to take snaps of a politician. The “PICFAC” turned out to be of Turnbull and Morrison issuing from the Prime Minister’s Office into the Prime Minister’s Courtyard and climbing into an official vehicle.

The couple did their best to look happy but the mere fact of the, erm, FAC, seemed to confirm that Turnbull’s office knows that he has a serious problem with the role Morrison is playing in his government — as Treasurer, his fellow Sydneysider should be the most important minister. At the moment, he barely even seems to be on the PMO’s email list.

Morrison isn’t the main casualty of this debacle, though — his boss is. In a desperate search for a Big Idea to convey the impression the last nine months haven’t been a waste in economic reform terms, Turnbull has handed his opponents a gun with which they’ve happily taken aim and fired at him.

And if it really was a leak that started all this, it’s not entirely clear that the source lies in a state capital, rather than within Turnbull’s own government. 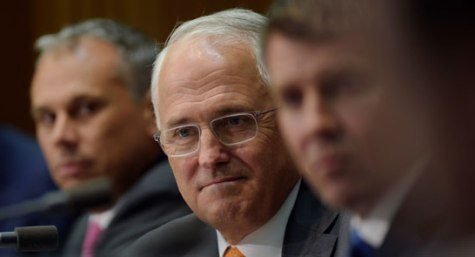 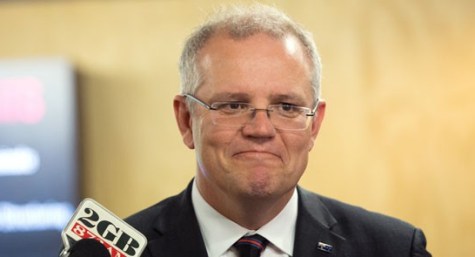 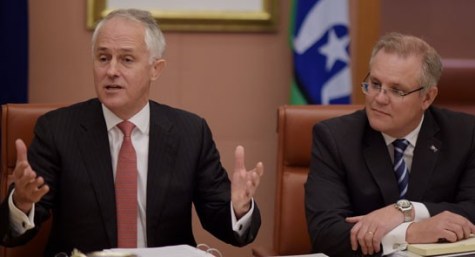 Bernard, I love you, you call it for what it truly is. I firmly believe that Mal and his LNP colleagues/frontbench should have taken all their dreams to the Big Sandpit in the Secret Gardens for an extended session of Sand Play Therapy.
They could have dumped, dreamt, eradicated delusional thoughts, unpolished their egos, got dirty and then retreat in the parents/voters lounge for a strip down, nappy change and a new set of clothes.

It took the focus off Arthur Sinodinos for a day, so there is that.

The flake-ism Malcolm so readily demonstrated in 2010 as pressure on him rose is beginning to look like it was not an isolated incident.

It was an ‘ambit’ proposal that Turnbull never had an iota of intention of arguing for seriously, much less trying to implement, solely designed to soften the States’/Labor’s capacity to kick up a stink about the cuts to education and health funding during the election campaign.

Sure, it’s a fig leaf of a spoiler, but face it: he had the premiers coming out of the meeting today with sound-bites and interviews half-graciously conceding what $$$ they did get, wthe wind taken out a bit out of their sails re: the cuts.

What you do when you’re f**king someone over is to offer them a ‘strawman solution’ to being f**ked over (especially an apparently ’empowering’ one) that is (of course) actually useless and irrelevant to them being f**ked over, and one they will (of course) have no choice but to refuse. There’ll be several more of these strawman ‘reform/solutions’ to the revenue-spending mismatch (which can ONLY be solved by reforms that increase the tax take) between now and the election, designed accumulatively to make it look like the States (= education and health, = the big Labor election issues) are just being unreasonable. Poor Malcolm, he’s trying sooo hard to find some middle ground…yep, you watch the PM pretend to grow increasingly ‘exasperated’ as the ‘recalcitrant’ States/ALP reject his (all irrevelant) ‘reforms’. In the end, he will make a big tough call to just run with the spending cuts as a virtue (of conviction politics, decisive leadership in the face of obstructionism, inagility, being stuck in the past etc etc), pitching it thus to the electorate.

It’s called corporate bullying, it’s how the power-money world screws us all (for example it’s exactly how Packer is getting outrageous extensions of his Barangaroo McSkyC*ck)). Make your opponent adopt negative positions agai9ns and again, flinging ridiculous ambit proposals at him, while completely ignoring their reasonable counter-suggestions and any genuine engagement…and then throw your hands in the air when you sniff the debate petering out of steam, and do exactly what you wanted all along.

Political journalists, for all their manufactured cynicism and world-weariness, are so naïve and hillbilly ignorant about how power works. Turnbull is playing the Canberra gallery like twelve year olds. Which is why he looked soooooooooo upset tonight that his laughably half-baked State income tax pitch got nixed, right? Oh dear me, all the headlines tomorrow about ANOTHER Turnbull Tax Reform Suggestion Getting Rolled…yes, he’ll really hate seeing them, won’t he.

Barnett could cost the LNP government by himself he’s that unpopular in the West..Col Pot is his nom de plume..He’s very Turnbullian..