No cake for you. Senator Eric Abetz has written an op-ed for The Spectator‘s Australian edition, taking PricewaterhouseCoopers to task for the auditor’s report on the cost of a plebiscite on same-sex marriage. With the cutting title “PwC or PC?”, Abetz had some real zingers like “It is so ‘diverse’ (it should be called perverse) that one of their high fliers was warned off being on the board of the Australian Christian Lobby because of its views.”

But what Abetz really offers is his own economic analysis of a plebiscite:

“And what about the beneficial stimulus of the sausage sizzles and cake stalls at polling booths? PwC presumably didn’t tell their clients the ‘opportunity cost’ foregone by engaging the proceeds of their fees on this tawdry exercise.”

Apparently the sausage sizzles and cake stalls will add enough to the economy to make up for MPs handing their jobs on to us.

Secret census business. This year’s census will mean that the Australian Bureau of Statistics keeps more of our data than in the past, and there are serious privacy concerns about the plans to retain personal data, as outlined by Bernard Keane yesterday. A tipster tells us that it’s not actually a requirement to tell the census your real name when filling out your demographic information:

“The ABS is completely unprepared for mass disobedience in the Census and has no strategy to deal with it. It also has not made it public that people are allowed to put a false name on their Census form. Any staff that question the direction of the Census are told to consider leaving the ABS as they cannot handle ’change’.”

Another tells us that the agency recently asked to keep a voice recording as security:

“I recently had to call the ABS to update my details and they pushed quite strongly to create a voice print of me ‘for my security’. So the government doesn’t just have access to facial recognition, our metadata and our phone and internet records, but are also compiling a database of our voices. Where will it stop?”

Not a joke. It’s been reported today that council elections in Queensland have been reduced to the luck of the draw, with one councillor in the shire of Croydon picked after a ping pong ball was drawn from a bucket. Two potential councillors, Anita Pickering and Jim Gilmartin, finished on the same number of votes, according to the Brisbane Times, and the winner — Gilmartin — was decided by the luck of the draw. The article quotes an anonymous source saying “That’s Queensland; that’s the way we decide.” And while we thought it must be an April Fools’ joke, the actual Queensland legislation is here:

The returning officer must, in the presence of 2 witnesses—

(b) assign a different number or colour to each candidate; and

(c) place only the marbles, balls or other similar things (marbles), complying with subsection (10), in an opaque container large enough to allow the marbles in it to move about freely when it is rotated; and

(d) rotate the container and permit another person present who wishes to do so to rotate it; and

(e) raise the container so that its contents can not be seen; and

(g) record the name of the candidate assigned the numbered or coloured marble that, under paragraph (f), is taken or allowed to come out of the container.

The day humour dies. Speaking of April Fools’ jokes, there’s been a few decent jokes today, and many many more terrible ones. But a tip for news organisations for next year — if “april fool’s day” is in your URL, the joke might be on you. 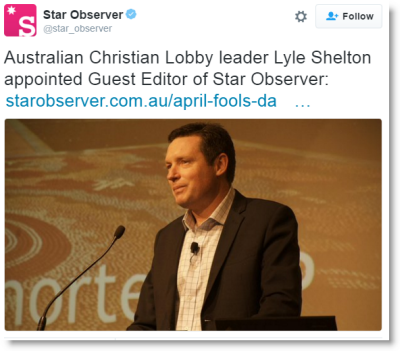 New direction for Better Homes and Gardens? A tipster tells us that there could be a new lick of paint and some updated soft furnishings at Better Homes and Gardens magazine, with a new creative director quietly appointed at the home and lifestyle magazine. “Will we see big changes at the juggernaut?” our tipster asks. Ms Tips is curious — surely the classic mag doesn’t need too much of a change? Those recipes are timeless!

Spotted. A tipster tells us that former CEO of CBA Ralph Norris was spotted twice in the Sydney CBD yesterday, looking “very fit, healthy and well-dressed”.

“Last sighting today was at Bar Cupola on ground floor of Angel Place Building, home to amongst other tennants, past and present pollies like Arthur Sinodinos but more curiously Global Search firms like Randstad. Could this be back to the future for Ralph Norris? Never mind the fact he is an extremely large CBA shareholder longing for a $95 share price as opposed to present low $70’s?”

Not all student unions. For the past few days, we’ve been reporting news of all the student unions cutting their financial contributions to the National Union of Students. That said, not all student unions are cutting NUS fees — others are picking up the slack. A tipster points Crikey to the Monash University students association minutes, which show affiliation fees have increased from $60,500 in 2013 to $68,000 in 2014 to $79,200 in 2015.

The Monash student union president last year was Sinead Colee — she was this year elected NUS president. Sydney University student rag Honi Soit claimed yesterday that NUS’ general secretary was after legal advice about how to remove Colee, who is accused of not having filed her monthly report to the organisation. Then again, Colee and the general secretary are from warring factions within Labor, so bear that in mind.

Ms Tips is keen to keep an eye on this — if you know more, do get in touch.

Made of Milo. In the recent all night sitting of the Senate, Queensland Senator James McGrath used his social media channels to track his Milo consumption (made famous on Annabel Crabb’s Canberra Al Desko). Now, in a photo posted to Facebook, Nestle has provided the Senator with free Milo. “As milo is priceless methinks I had better update the register of interests,” McGrath wrote. 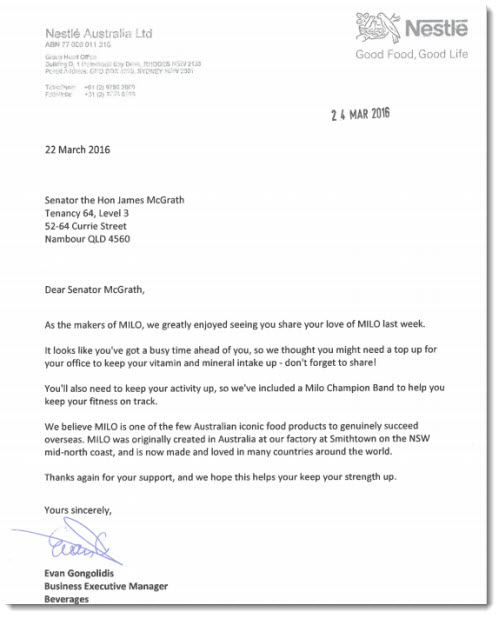 *Heard anything that might interest Crikey? Send your tips to boss@crikey.com.au or use ourguaranteed anonymous form

A cake stall at a polling booth doesn’t add to economic activity. All it does is to transfer a purchase from a shop employing people and paying taxes to volunteers who don’t do either. Assuming that the purchase of a cake isn’t just an additional purchase, which when consumed, may add to the obesity epidemic and affecting the health budget.

I like your buzzfeed-style headers in honour of the day, but where’s the twenty-seven cupcake decorations illustrating MPs expenses claims that will change my life forever?

By the ‘logic’ of your assertion, Wayne, opening up any new shop might be said to be outside the economic process because money spent in it then can’t be spent elsewhere.

A new shop opening is providing competition to existing shops assuming that it’s not in a new area with unmet demand. But anyway – a new shop is still employing people and paying taxes for considerably longer than the one day of the plebiscite.

I like to buy products at the cake stalls, but my purchase of sweet bread from bread shops drop in the week following, so it does reduce economic activity.