The Age's new editor has been announced. And other media tidbits of the day.

Forbes promotion made permanent. In news that surprises no one, Mark Forbes has been named editor-in-chief of The Age, replacing Andrew Holden who left some weeks ago.

Forbes, a Walkley-award winning journo, has been acting editor-in-chief since Holden left. Before that, he was The Age’s news director for the past three years — a role similar to that of a chief of staff —  and had frequently taken on Holden’s responsibilities whenever the former EIC was away.  Fairfax editorial director Sean Aylmer described him as  “the ideal person to continue The Age’s transformation”.

Forbes has already taken a more robust role defending the paper than one would have expected of Holden. When former Sunday Age editor Gay Alcorn (now at The Guardian) wrote a piece lamenting the paper’s decline, he didn’t mince words, writing on Twitter that it was a “hypocritical, inaccurate, self-serving piece of crap” from someone who had taken the money and run. — Myriam Robin

Together again. Margaret Pomeranz and David Stratton are reuniting for the Sydney premier of Pawno, an indie drama set in a Footscray pawn shop by first-time director Paul Ireland. The cinematic power couple are leading a Q&A of the director and key cast members on April 12. Seems nothing can keep them apart.

God help us. Not the hipsters! There appears to be no Maurice Newman in the Oz this week — the crack UN fluoride team got him at last — but instead we have Bernard Salt, scourge of the “trendies”, the demographer who predicted many of the trends of the ’70s, in the 2000s.

Bernard likes freeways. He does not like these inner surburbanites who protest against them:

“… the protest movement against various forms of transportation infrastructure is an exclusionary and divisive sect whose purpose is to protect the privileges of a few.

“The inner-city elite want to keep the inner city an exclusive collection of urban villages for bohemians, hipsters, well-to-do corporates and assorted lifestyle aspirants — basically for people like themselves — and the best way to keep this exclusivity is to use a traffic-and-congestion force-field to keep the suburbanite dross in their place.”

Not the bohemians! Bernard is talking about campaigns like that which stopped the East West Link going through areas like Collingwood and Flemington. And what are the two Melbourne suburbs with the highest concentration of public housing? Amazingly, Flemington (31%) and Collingwood (29%). They also have average median income, and a higher-than-average level of tertiary degree holders. In other words, they’re full of people not like each other, many of whom are poor, but at least have the advantages of the inner city and don’t want them turned into traffic ramps, which is why many of them participated in the protest movements that stopped the road in its tracks — which rather destroys Salt’s argument. Pity. If only he had experience with demographic research! In Bernard’s next column: drink a cappuccino and check your biorhythms, it’s Kajagoogoo time! — Guy Rundle

The article in question was actually an attempt by your correspondent — who’s not a huge Hillary fan — to understand her from the POV of those who support her, and see her as an expression of their hopes. As I noted, a lot of these people were poor – -and as many of the American poor are, unhealthy, and aged before their years — having been blindsided by the last 20 years. The article was, in part, me challenging my own opposition to Hillary (as a right-wing Democrat) by considering the situation of the people who wanted a better bet on real change than offered by Bernie Sanders’ long shot.

So, Clem didn’t read the article. OK. Fair enough, she has all of Twitter to supervise on our behalf. But even the headline makes clear that the “lumpy, pale…” etc reference is to “America” — or a certain segment of it — rather than Hillary herself. How get that wrong? Clem’s complaint is asinine, as some of the replies to the tweet suggested. Weirdly for the Head Prefect, her comeback is then a lookist (and entirely accurate) shot at me (I have retreated to a safe space at the bottom of a bottle of J&B). — Guy Rundle

Media stocks flag. His has been a heroic, lone task, trying to whip up interest up media reform, when so far as the stockmarket is concerned Senator Mitch Fifield’s reform proposals are a loss-making dead end. Perhaps the good Senator’s real task is to change the market’s thinking to the point where Telstra and News Corp can resolve their growing differences over the future of Foxtel (and Fox Sports, News’ 100% owned arm), and clean up the mess than remains at Ten (and allow WIN’s Bruce Gordon to bury his losses and move on Nine). Certainly there is little substantial interest in mergers and similar activity, even though Nine has snapped up 9.9% of Southern Cross and WIN has grabbed 14.9% (and more apparently) of Nine.

It is no mistake that Seven West Media was the best-performing stock in the media sector in the March quarter was the best-performing media company in its area of operations (well, TV, not newspapers and magazines). Its shares rose nearly 33% after a 40% fall over 2015. Seven was one of the best performed ASX 200 stocks in the latest quarter after being one of the worst in 2015. And the rebound reflects its crushing start to the 2016 TV ratings battle, and the badly stumble by rival Nine whose shares were down 18%. Ten shares lost 41% in the quarter (making Foxtel a big loser on its 14.9% stake). Southern Cross shares “only” fell 2% in the quarter, but that’s because of Nine’s raid. Prime Media shares fell 27% (it is unwanted because Seven. its feeder network, doesn’t see any gains in buying media assets).

Fairfax Media shares dipped 6.5% — the market is not convinced the cuts of 120 journalist jobs will be enough. And News Corp shares lost 5.9%, but it was more mid quarter and the shares rose as investors sought safety in larger media stocks and deserted smaller ones. News and Fairfax have investor support for their online real estate businesses in Australia (and the US and India in the case of News).

Genworth Mortgage Australia’s $250 million capital return (see Business Bites) proposal because it expects to write less lenders mortgage insurance this year is a warning to both News and Fairfax that there’s pain ahead in Australian real estate over the rest of 2016. — Glenn Dyer

Video of the day. Just imagine … 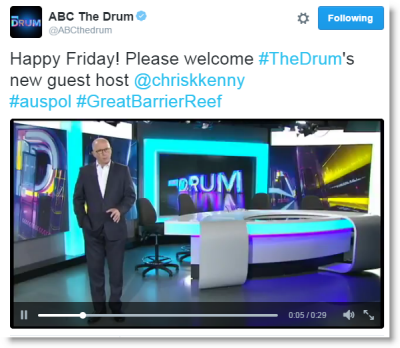 Don’t p*ss the Tweefect off too much, Rundle, you’ll be out of a job.

Have no fears, Jack, as he;ll be right. This is after all Crikey Land.

I didn’t know who Clementine Ford was until I read this, thankfully I am now informed enough to not waste my time reading anything with her byline.

Perhaps the Clemenceau of Communication didn’t learn to parse in primary school?

I objected to your description of Hilary Clinton, too. I read the article and still think your headline was offensive.

Not impressed either, by your disparagement of Clementine Ford. When you’re exposed, you turn on the person who points how offensive, facile and pathetic your writing sometimes is.