The Adventures of Terry Smith. Yesterday we pointed out that we have it on good authority that the Department of Finance has some emails related to one “Terry Smith”, using the email pilbera@yahoo.com. This is the email address The Australian claimed member for Fairfax Clive Palmer was using to sign off on things for Queensland Nickel. It seems Terry has been busy. One tipster points out to us that the Pilbera (sic) email address had been used to register the now-defunct web address peoplelinka.us. 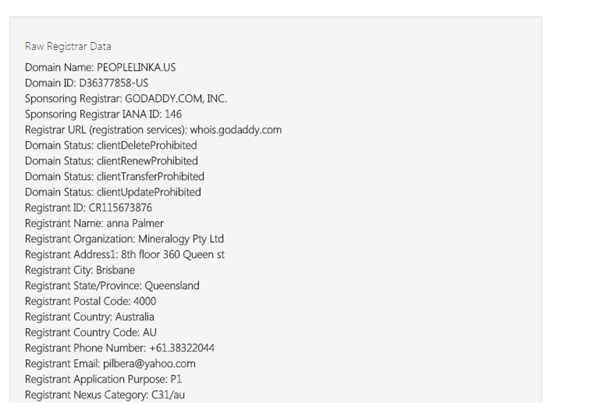 The registration is tied to Palmer’s Mineralogy company, and his wife, Anna Palmer, was listed as the contact. A search for Peoplelinka reveals that Clive Palmer owns the trademark on Peoplelinka, which was filed in July 2014 and registered in May last year — well after Palmer was in Parliament. According to the trademark listing, Peoplelinka could be educational software or some online educational company to be established by Palmer. A potential post-parliamentary career for Palmer if he loses his seat the next election?

Speaking of Palmer, a tipster informs us the federal MP is also seeking to offload an “unfinished masterpiece” in Maleny on the Sunshine Coast, just outside of his electorate. The four-bedroom, four-bathroom, 95-acre property needs a lot of work to finish the main house. For that reason it has been described as “Da Vinci’s Gran Cavallo of Real Estate”. For those who fell asleep in art history class, that would be the horse sculpture Da Vinci was commissioned to build but never finished. The price for the incomplete property — with 20 car spaces — is $4.4 million.

Metadata secrets kept by the AFP. Independent Senator Nick Xenophon asked the Australian Federal Police at the last round of Senate estimates whether the AFP had accessed the call records and other metadata of journalists, federal politicians or their staff in the last year. No dice. The AFP very sternly told Xenophon in a response published this week that it would be an offence to disclose what metadata had and had not been sought under the Telecommunications (Intercept and Access) Act. In the past the AFP has said it has sought no journalist warrants since the passing of the metadata legislation last year, but given the recent leadership tensions as a result of the leaking of a draft defence white paper to Greg Sheridan and the referral of that leak by Prime Minister Malcolm Turnbull to the AFP for investigation, we suspect that may have changed.

Abbott in Noosa and Warringah campaigners. Much fuss was made earlier this week about former prime minister Tony Abbott “dropping in” on a 17 year-old surfer’s wave in Noosa, and while she seemed fairly blase about the whole experience, a Noosa local noticed Abbott also used his time on the coast to visit long-time friend Noel Pearson. The tipster says:

“Pearson, who has made a habit of purporting to speak on behalf of all Aboriginal people on Cape York, sometimes all Indigenous People in Australia despite any mandate to do so, is now understood to be a permanent resident of upmarket Noosa on the Sunshine Coast. Also known as an environmentally conscious area, may we soon spy Pearson and Abbott sipping lattes with the greenies in their trendy cafes?”

Another tipster also suggests recent reports of Warringah campaigners refusing to help member for Lindsay Fiona Scott (she of the infamous “sex appeal” comment) — whom Turnbull visited this week to announce his state income tax policy on the Panthers’ football field — because she backed Turnbull in the leadership challenge are exaggerated:

“The suggestion that ‘hundreds’ of people gave their time for the Penrith campaign from Warringah is false. At best, 15-20 people from Warringah went out there. The truth is, sympathy for Tony Abbott across the Liberal Conference in Warringah is starting to wear thin. Branch Presidents are openly discussing their concern about his behaviour and the fact it is reflecting poorly on the Warringah Conference, let alone the blow back from voters. Make no mistake, Tony Abbott backing Walter Villatora against Bronwyn Bishop has created a new tension dynamic not seen before. He’s meddling where he isn’t wanted.”

Getting off Scott free?  In his extended interview on ABC’s Media Watch on Monday, outgoing ABC managing director Mark Scott said a lot of the change to the national broadcaster over the past 10 years had been done by gaining the support of the staff:

“I think we’ve got a lot more done here with the support of the staff at the ABC, and I think they’ve understood the strategic direction that we’re taking the place, they’ve understood the digital opportunities. And so that even when things have been tough, and we’ve had to do some very difficult things, we lost best part of 400 positions with a big budget cut, we’ve had to close the retail stores, another 300 jobs done then. You know, really difficult decisions. But I think at all times I’ve felt the support of the staff, the engagement of the executive team, and certainly the support of the board.”

One tipster suggested that the support didn’t feel mutual when it came time for ABC staff to discuss pay negotiations:

“He’s refusing the staff to meet in their workplaces to discuss the next round of pay negotiations. Journos cannot meet in the newsrooms for example. What a disgrace — he is totally disingenuous. Good riddance, Mark.”

A spokesperson for the ABC said that this was likely related to a complaint in February from the news division, in which the ABC advised journalists’ union the MEAA that a meeting in the newsroom would disrupt people’s work, and an alternative venue was offered: “It isn’t the first time we have asked that union meetings occur outside the newsroom. The ABC is complying with all the Right of Entry Obligations under the Fair Work Act.”

Off with their head. So keen someone in the Victorian government was to make a Game of Thrones joke about using the end of daylight savings time to change smoke alarm batteries that they neglected to offer correct instructions on what to do this Sunday when daylight savings is over. We don’t put our clocks forward one hour, we put our clocks back. Shame. Shame. Shame. 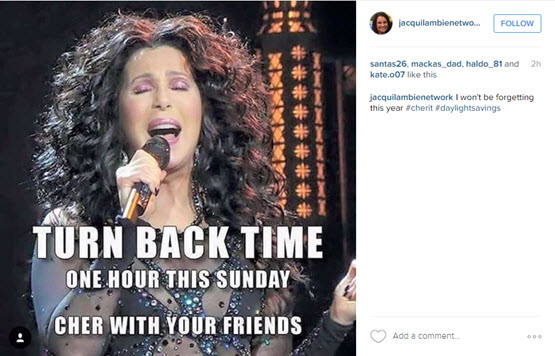 Daylight SAVING – no “s”, dammit! Go to the naughty corner.

I always thought it was daylightS saving. Off to the naughty corner I go too.

Shouldn’t it be ‘ends’ for the singular because ‘daylight savings time’ or ‘Eastern Summer Time’ as it was previously known is the name of the a period of time between forward and back of the hour hand? Could an authorised style guide guru clear this up? Preferably not someone at the ABC where they refer to ‘Day time’ which confuses the bejesus out of me between sunset and sunrise.

That should be ABC New Radio’s reference to ‘daylight time’.

Reluctant as I am to use an amerikanizm, I find this tetralog helpful around each Equinox – “Spring Forward, Fall Back“.
Interesting that Clive/Anna supplied the wrong phone number for the registration of Pilbera, which lacks the Qld identifier ‘7’.