Peta Credlin's got a shiny new job. And other media tidbits of the day.

Credlin’s new gig. As tipped by the Sunday Tele a while back, Peta Credlin has indeed joined Sky News as a “contributor” during the election campaign.

The release plopped into our inboxes this morning. In it, Sky News welcomes the “skilled political tactician and strategist”, who CEO Angelos Frangopoulos describes as a “central figure on the Australian political landscape”.

“Her experience navigating the mechanics of government from the position of both leadership and opposition will provide unmatched political insight during our election programming.”

Credlin is also quoted: “To say a lot has happened since the Coalition was elected in September 2013 would be an understatement.” She promises to add “insider value” to Sky’s election coverage, and in an interview with The Australian, added that she’d only ever given one interview.

That assertion was demolished by Fairfax’s Latika Bourke this morning, who pointed to a number of recent interviews given by Credlin.

And, of course, interviews with The Australian and The Daily Telegraph in the wake of Niki Savva’s book. — Myriam Robin

Missing the point. Is there group denial at Nine Entertainment Co about the network’s 2016 ratings disaster? It’s odd how a Fairfax Media interview in this morning’s papers with Nine Entertainment CEO Hugh Marks mentioned everything bar the story that many in TV and the markets would have liked to have heard him talk about: Nine Network’s ratings collapse, and especially the failure of two key 2016 programs, Australia’s Got Talent and Reno Rumble.

The interview covered media policy and reviews, the future of the ABC and SBS, pay TV and the sports anti-siphoning laws. But focusing on the affairs of two state-owned broadcasters when the carefully laid plans for the 2016 ratings battle with Seven and Nine are falling apart, day by day? It’s just very odd.

“Mr Marks stressed the two public broadcasters have changed dramatically since their inception and if the government wants to have a conversation about comprehensive media reform the possibility of a merger between ABC and SBS, their role in delivering content and funding need to be considered.”

This is a distinctly strange topic for the interview to cover as Marks confronts the rising chance that Nine has already lost the 2016 ratings battle with Seven and Ten. In fact, Seven not only looks like winning “total people”, again, but has a very, very strong chance at winning the major age demographics of 25-to-54, 18-to-49 and 16-to-39 because of its very strong start with programs such as My Kitchen Rules, First Dates, Downton Abbey, The Chase Australia, Seven Year Switch and Home and Away. — Glenn Dyer

Front page of the day. Amen. 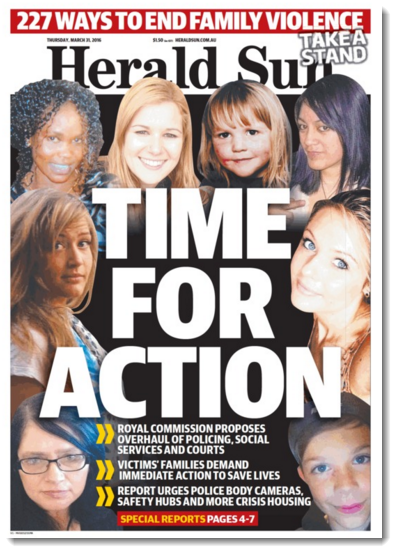 Does this mean Crikey still hasn’t taken its first step towards rehabilitating this website into a serious worthwhile entity by recruiting Peta Credlin?

Hugh Marks’ comments or merging ABC and SBS are just a rehash of the massive self-serving hypocrisy practised by the Murdoch press. Also the position of a very lazy rent-seeking CEO looking for someone else to do his job.

How long before she interviews or comments on Abbott? Perfect place for her with so few viewers which is also why I am pleased that Blot’s show will be there, 5 nights a week FFS! – imagine paying to watch Blot ranting.
It also frees up the Ch10 slot for something more intelligent & worthwhile, like bigfoot trucks or Best Home Videos.