Is Whistler’s Mother really all that good?

The most famous mother in art history comes to the NGV. How good is it?

It took, give or take, an hour from start time of the opening to actually standing before the Revered Object — Arrangement in Grey and Black No.1, (known as “Whistler’s Mother”) by James McNeill Whistler. In the Great Hall of the NGV we were served bubbly and high-end canapes. The demographic was 60+ and casual AA.

In their respective speeches, enlarded with ceremonial rhubarb, the representatives of the two major funding bodies helpfully offered us their insights. One explained: “This is a great, great, great painting.” The other proudly stated: “This is one of the world’s greatest pictures.” Enjoy.

We dutifully trooped upstairs. In the last century, before social media, the Mona Lisa effect was the shock of encountering a picture so much smaller than its reputation. Arrangement in Grey and Black No.1 provides the opposite surprise — it’s nearly six foot high and over six foot wide.

Is Arrangement in Grey and Black No.1 really one of the world’s greatest pictures? As usual with paintings in the real, it is quite a lot darker in tone and with much less contrast than its innumerable reproductions. And with the screen of its extreme fame, it’s a very difficult painting to see. At the NGV it’s also enshrined in a darkened room behind glass, and the spotlights allow very few viewing positions without a strong reflection. (In contrast, the Mona Lisa is in a big white room with flat even lighting, ensuring a constant scrum of selfie snappers).

Whistler’s painting is a superbly unified effort; the modulation of close tones is sustained across the large surface and the many, many variants of grey — pearl, rat, mink, onion — offset the firmly but gently painted flesh areas. Details become clearer. You can see how tall Whistler made the old lady, who was only 67, with long, long legs (see Diagram 1). The curtain on the left delicately glistens with a silver pattern. And as well as having her feet up on a footstool, Whistler had also placed Anna Matilda McNeill on a platform — you can just see the edge near the bottom of the painting. She is, in effect, on a pedestal. Her voluminous skirt falls off the edge of the platform and picture. But the lighting, so hard to look! Anyway, I would confidently call it among the world’s 10,000 greatest paintings. 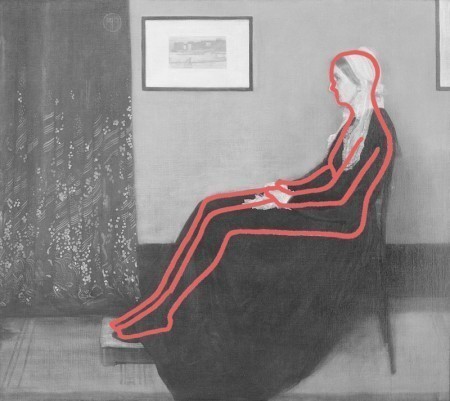 Whistler’s flair and experimental inclinations made him a crucial node in the tangled passage of art from the 19th century into Modernism. His own incipient modernity prompted such titles as Nocturne in Black and Gold: The Falling Rocket (subject of a notorious libel suit) and Whistler’s Mother.

The portrait embodies a particular lesson for contemporary painters, located in the figure of the Quakerish matriarch, shoehorned as a cypher into a joke about formalism, with its abstract title 40 years before Western abstract painting was invented. The picture’s persistent fame reveals that Anna McNeill is one of the stealth vehicles that smuggled the cargo of emotion, feeling and meaning into the modern art project right into the present day.

When Beckett joked, “Meaning! Ha, that’s a good one!” it was a rueful acknowledgment that “meaning” is a joke we all get: the desire for meaning in the face of an uncaring universe. But the tender painting of Anna’s forbearing face, in a son’s tribute of ironic affection to a long-suffering mother in service of his artistic ambitions, may, on some days, be enough to haul the viewer from the sterility of pure aesthetics back into life.

The NGV managed the coup of securing Whistler’s Mom because it got to loan-swap its Siesta by Pierre Bonnard with the Musee d’Orsay. That is to say, Siesta joined a retrospective, Painting Arcadia, of more than 90 paintings by Bonnard at the Orsay. While the NGV created an entire show around a single painting by Whistler. Thus the cultural power differential between Paris and the Paris End of Australia.

The most famous paintings in the world are …

The director of the NGV puts Whistler’s picture “alongside da Vinci’s Mona Lisa and Munch’s The Scream … as one of a handful of artworks which enjoy universal recognition and admiration.” It is hard to think of another painting of a single figure that has to endure that level of fame.

There are similarly famous series of faces: the self-portraits of Rembrandt and Van Gogh, and Warhol’s Marilyn and Elizabeth Taylor, but they are not single works. The one other possibility is both a single work and a whole category: the anonymously produced painting (or paintings) of Chairman Mao over Tiananmen — that is one picture whose fame and power really do transcend mere art.

It might make a very suitable loan as it would hang beautifully over the waterwall mouse hole of the NGV (imagined below). 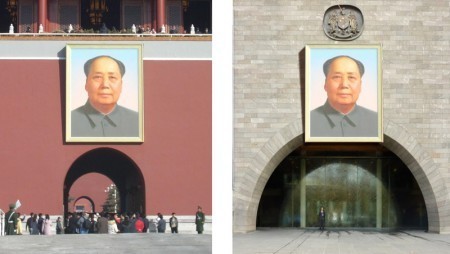